As the Easter Sunday tragedy grabbed the headlines, the release of the Annual Report for 2018 by the Central Bank was hardly noticed. There should be little doubt that it is the economic problems that in most cases lead to other problems – violence, drugs, corruption, debt, etc.

Therefore it is very important to properly assess the economic conditions, realise where the problems are and provide solutions, to effectively end all other problems. Hence we cannot afford to let the glaring signs in the Central Bank annual report go unnoticed.

While many experts point out a number of economic problems, in my view, the main economic problem is the low growth. It is the poor growth that results in lower income, unattractive jobs, less career opportunities and so on. This could be the major cause for frustration leading to migration, wrong doing and/or violence.

This clearly shows that the current growth rate and the strategies which lead to such slow growth are not acceptable. By identifying and highlighting this fact appropriate measures could and should be taken to rectify and change course. The growth has to be revived and that should be priority. But it shouldn’t be just a short term rush, instead a long lasting sustainable improvement. 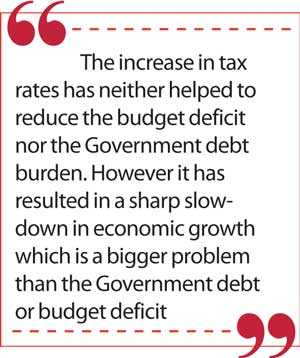 Despite all the efforts made in recent years such as the reinstatement of the GSP facility, the balance of trade (and services) has not improved. Therefore, external trade strategy also needs to be critically evaluated and changed. The objective should be to reduce the deficit gradually in the coming years but yet again on a sustainable basis.

Debt problem – not getting corrected

Many (both politicians and experts) have voiced that the Government debt is the main economic problem faced by Sri Lanka. While I do not agree with this view, has the strategies adopted to tackle the debt problem succeeded? The Government debt as a percentage of GDP has reached 82.9% in 2018 from 68.7% in 2012. So clearly the measures taken to ease the debt burden are not working. Therefore despite compromising on growth to improve the debt position, it has not worked.

Fiscal consolidation – is it happening?

Finally, a lot has been said about fiscal consolidation and the need to reduce the Government’s budget deficit (reduce the difference between comparatively higher expenses and comparatively lower revenue). The tax rates were increased with the intention of achieving this objective.

The data shows that the overall budget deficit as a percentage of GDP was 5.3% in 2018 and almost the same as 5.4% in 2013. In other words, although tax revenue as a percentage of GDP has increased (from 10.5% to 11.9%) due to higher tax rates, the increase in expenditure is even greater. At the same time the capital expenditure (or investments) has actually come down (from 4.8% to 4.2%), which means a sharp increase is seen in current expenditure. By increasing the burden on the tax payer, Government’s day-to-day expenditure has been increased but not the expenditure on long term measures which would have helped the future economic prospects of the country.

Enough indicators to trigger a significant shift in policy

The above information in the Central Bank annual report clearly shows the need for a significant shift in economic policy. The increase in tax rates has neither helped to reduce the budget deficit nor the Government debt burden. However it has resulted in a sharp slowdown in economic growth which is a bigger problem than the Government debt or budget deficit in my opinion. The continuing deterioration of the external current account also underlines that not enough substantial measures have been implemented to boost foreign currency earnings.

Indeed the Easter Sunday tragedy was shocking. But the above glaring signs in the Central Bank annual report should also be equally shocking for every concerned Sri Lankan citizen.

(The writers could be contacted via articles@w-n-y.org.)