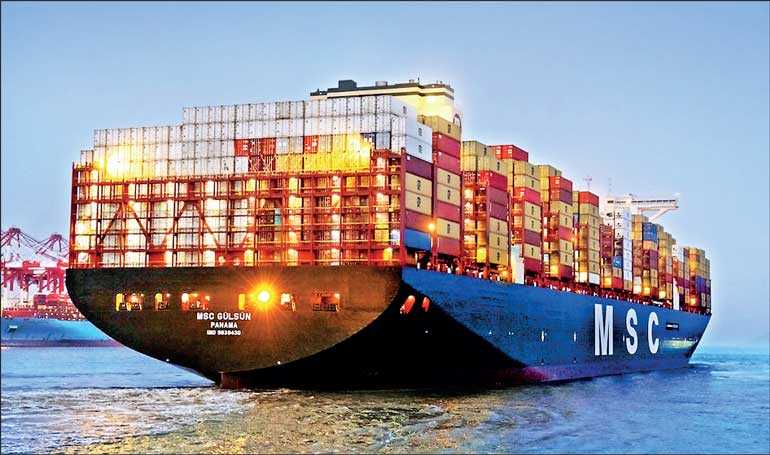 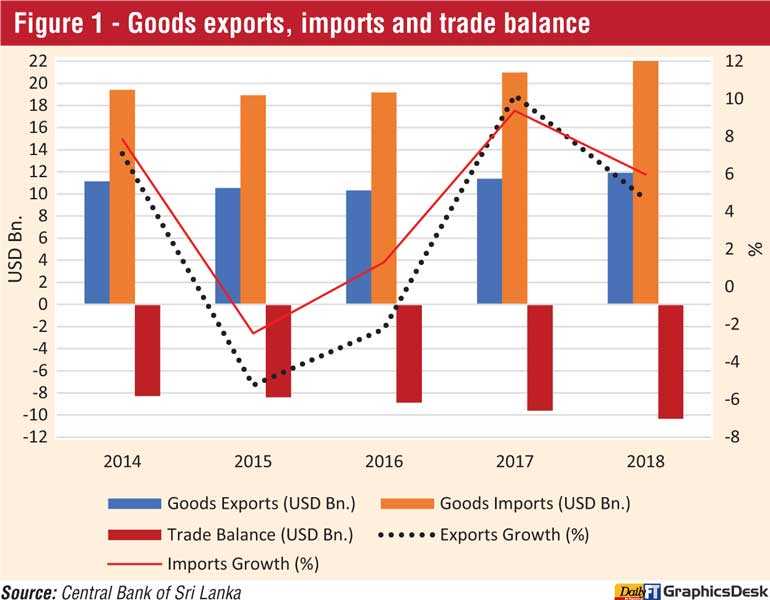 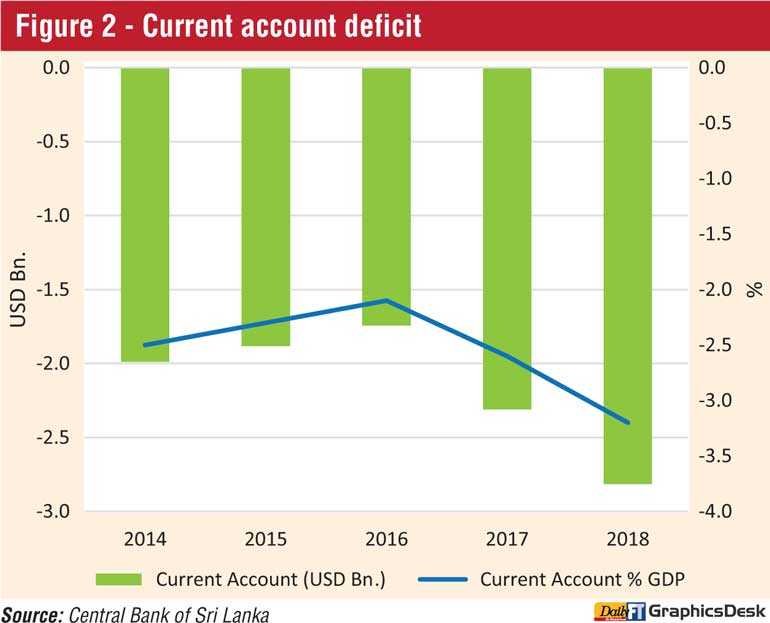 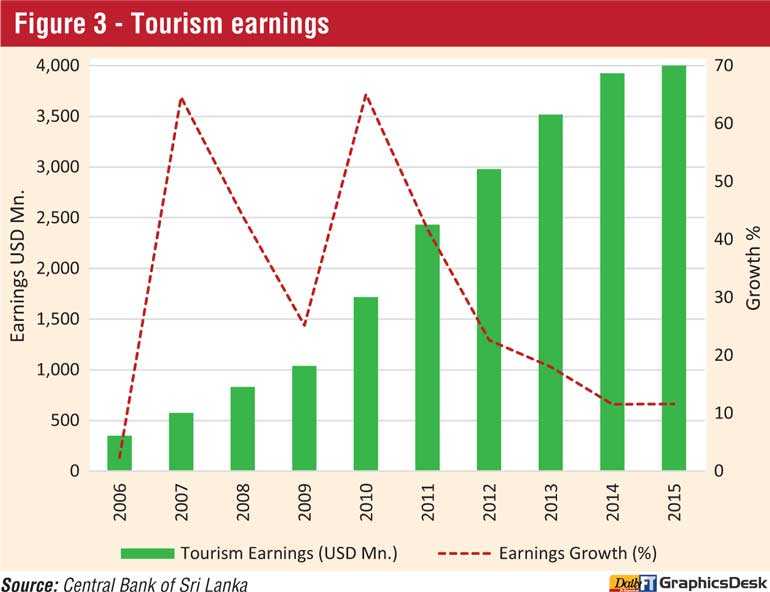 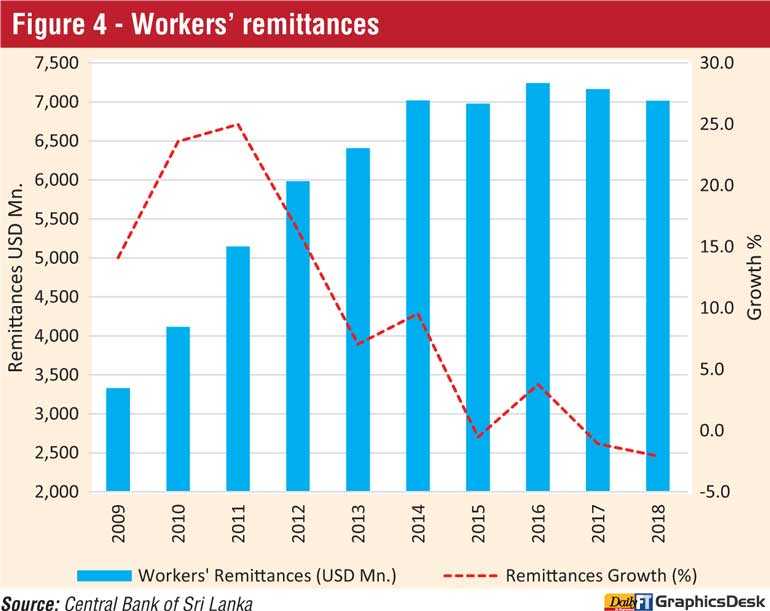 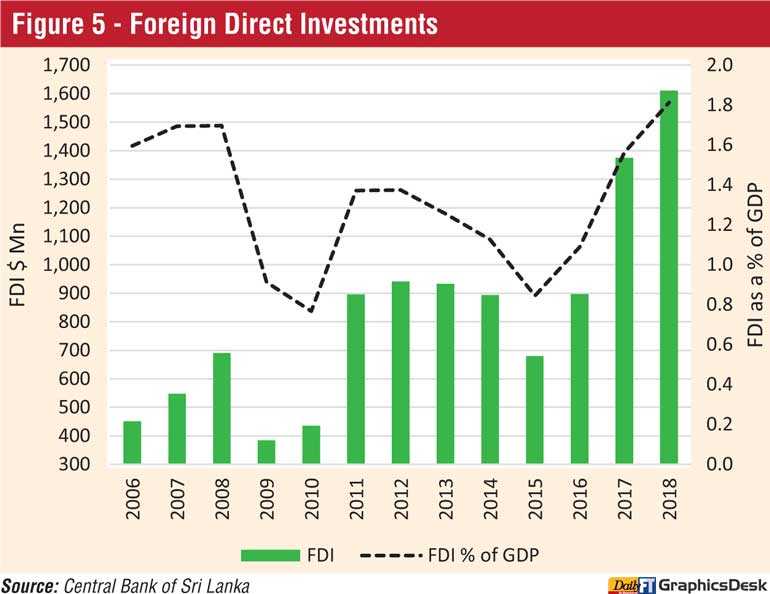 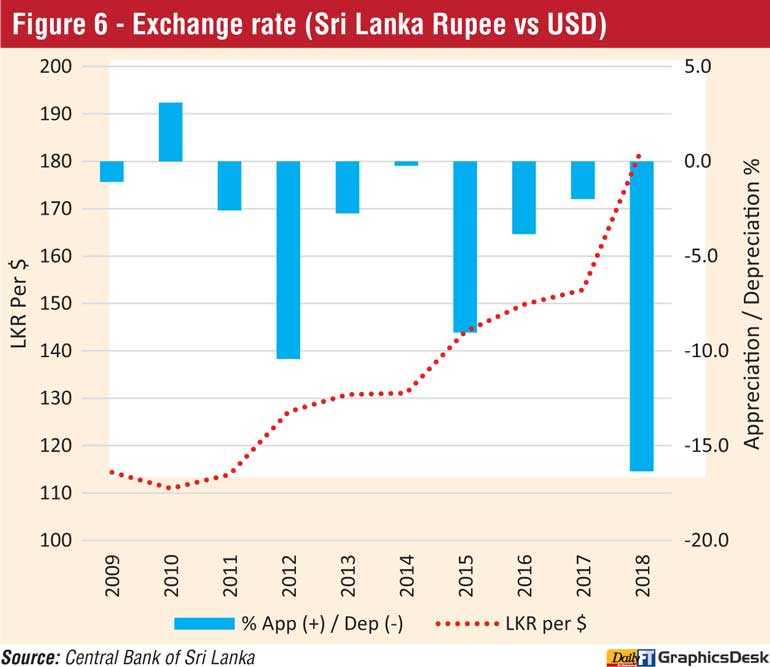 In this article, I review the recent performance of key areas in the external sector of the Sri Lankan economy that includes the trade balance, current account, tourism earnings, workers’ remittances, foreign direct investments and the exchange rate.

Volatile trade performance has led to a widening trade balance

Negative growth in exports in 2015 and 2016 and slow export growth in 2018 have contributed to the volatile export performance in recent years. Reflecting these trends, Sri Lanka’s trade deficit has increased at an average rate of 6.4% over the same time period.

Many of the export-oriented Asian economies saw their exports grow at much higher rates than what was recorded by Sri Lanka during recent years. Some countries with which Sri Lanka has to compete for inward investments and export markets have recorded much higher export growth.

Based on the available comparative data for 2017, Sri Lanka’s exports are only 22% of the economy whereas their share is 37% in upper middle-income (UMI) countries. Further, Sri Lanka’s exports as a proportion of the economy are less than half of the same in UMI economies in Asia (53%), suggesting the need to expand exports significantly in order to achieve high growth.

Reflecting higher imports than exports, net exports contributed -7% to the Sri Lankan economy in 2017. Although the contribution of net exports is much more negative (-10%) in lower middle-income (LMI) economies in general, they account for 7% in UMI economies in Asia, highlighting the important role played by net exports in these economies.

The largest contributor to the services account of the balance of payments is the tourism industry. In 2018, 2.3 million tourists arrived in Sri Lanka. According to official statistics, the industry provides direct and indirect employment to 388,487 people. The number of people who earn income from activities related to the tourism industry is quite possibly much more. In 2018, Sri Lanka’s gross earnings from tourism amounted to Rs. 712 billion or $ 4,381 million, which represents an increase of 12% over the previous year (Figure 3).

Gross tourism earnings are about 5% of the GDP of the economy. On a net basis, the contribution of tourism earnings to the services account was $ 2,721 million in 2018. One clear pattern is that tourism earnings growth has shown a secular decline to about 12% after peaking at 65% in 2013.

Sri Lanka has already experienced a decline following the April 2019 Easter Sunday attacks, with tourism earnings dropping by 19% in dollar terms in the first seven months of this year. Given its importance in the balance of payments, the country must develop and implement a long-term tourism sector development strategy.

The most important positive and the largest contributor to the income account of the balance of payments is workers’ remittances from abroad (Figure 4). Since peaking in 2016 at $ 7,242 million, remittances have declined for two consecutive years. In 2018, remittances amounted to $ 7,015 million which was a decline of 2.1% relative to the previous year.

Remittances seem to have plateaued at about $ 7 billion and their growth has continued to exhibit a secular downward trend since 2011. Growth in workers’ remittances has already declined by about 10% in the first half of 2019. The Government must review its policy framework for foreign employment and implement measures to address the decline in remittances.

Foreign direct investments (FDI) are one of the important sources of financing for the current account. FDI, excluding foreign loans obtained by the Board of Investment (BOI) companies, was $ 1,611 million in 2018 and has shown an increasing trend over the past three years (Figure 5).  As a percent of the GDP, FDI was 1.8% in 2018 and has shown an uptrend since 2015 low of 0.8%.

FDI flows in some of the key growth-oriented economies in Asia have been much larger. FDI in 2017 was $ 9.5 billion in Malaysia, $ 8 billion in Thailand, $ 10 billion in Philippines, and $ 14 billion in Vietnam. India attracted $ 40 billion while China’s FDI was $ 168 billion. As a percent of the GDP, FDI was about 3% in Malaysia and Thailand, 6% in Vietnam and 13% in Cambodia.

Both in absolute and relative terms, Sri Lanka will need to attract substantially more FDIs in order to fuel growth. FDIs in the range of 3% to 6% of the GDP are required in the medium-term in order to support higher economic growth by increasing export-oriented manufacturing industries.

The depreciation of the rupee in 2018 was largely driven by the monetary policy tightening by the US Federal Reserve Bank and the rise in US interest rates. While the US Fed has cut the interest rate since then in response to slower economic growth, any sign of increased growth expectations could once again generate expectations for further tightening. In such a scenario, the rupee will likely come under more pressure.

Due to lower interest rates and economic slowdown, the US dollar’s strength might dampen if not weaken. In the best-case scenario, increased capital flows into government securities and a narrow trade balance could mitigate against a possible drop in tourism earnings and remittances. This will support the stability of the Sri Lankan rupee. In the worst-case scenario, increased political and macroeconomic risks in the country will lead to further acceleration of net capital outflows and depreciation of the currency above the average depreciation rate of 4.5% observed in the last 10 years. This year, the rupee appreciated by 4.8% until 22 April, and since then it has reversed course and depreciated by 3.1%.  As a result, its appreciation against the US dollar this year stands at only 1.5% now.

Overall, the country faces significant external sector risks. The domestic economic growth is already predicted to be lower this year. In an environment of expected US and global economic slowdown, these vulnerabilities could potentially magnify. Any increase in political uncertainties in an upcoming election cycle could further exacerbate economic risks, leading to a challenging external sector outlook.

The institutions responsible for economic management of the country must plan measures and be ready to respond to any significant deterioration of the external sector of Sri Lanka in the short to medium term.

(Lalith Samarakoon is a Professor of Finance and Financial Economist. He serves as the Secretary-General and Chief Economist of the National Economic Council of Sri Lanka. Follow Perspective at www.lalithsamarakoon.com and Twitter @LSamarakoon. Email feedback and comments at samarakoonperspective@gmail.com.)