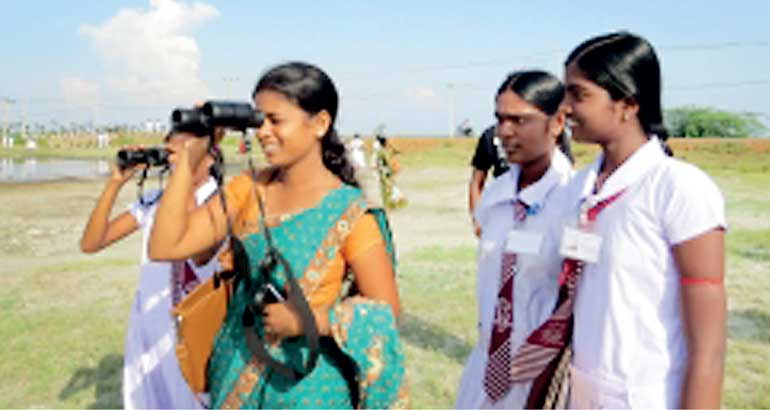 The Northern Province contributes 3.5% of the national GDP, the lowest among the nine provinces. But, according to Central Bank sources it is growing at a fast pace of 12.1% per annum. The economy in North is worth Rs. 390,689 million, of which services made up 65%, industry 20% and agriculture 15%.2

In terms of the labour force, service-sector employment predominates throughout the Northern Province, with Jaffna District being an anomaly with almost equal levels in agriculture and services.

These numbers must, however, be qualified. The service sector is a residual category and is not analytically coherent. It includes modern, high-value activities such as the provision of office-support functions over distance using telecom and traditional activities such as plucking coconuts. Retail is perhaps the largest service industry and covers the spectrum from e commerce and high-end retailing that is knowledge and IT intensive to the activities of a hawker on the street. Nevertheless, modern, knowledge and IT-intensive service activities are growing rapidly and constitute the basis of modern economies. 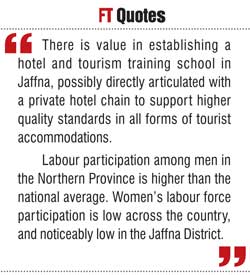 Even in the past, agriculture and services were the pillars of the northern economy. Jaffnaites within the service sector could be categorised into two distinct groups. The first included educated people working for government or private organisations in professional capacities. The second segment was engaged in retail and wholesale trade. Jaffnaites were associated with retail and wholesale trade throughout the island and were not limited to the North.

Modern service industries with potential for the North

The objective of this note is to identify the service industries that appear to have the greatest potential in terms of reviving the economy of the Northern Province, and thereby of contributing to the creation of a solid foundation for national reconciliation. The authors welcome comments and criticisms that would enable the sharpening of the focus and the filling in of gaps. The ordering of the industries reflects our judgment of the greatest potential.

Two types of elderly people are likely to move into the North for their retirement years: Sri Lankan Tamils residing in locations within Sri Lanka other than the Northern Province and members of the Diaspora returning to Sri Lanka. The climate, costs, emotional attachments and social networks are contributing factors. However, lack of 24x7 access to high-quality medical care has proved to be a significant negative factor.

Primarily driven by healthcare concerns, many Diaspora elders who have returned to Sri Lanka reside in Colombo without completing the journey to the North. It appears that many of the Tamil elderly people residing in Colombo are from the wealthy strata. A majority of those who have returned to the North appear to have less disposable income and may be financially dependent on their children/relatives. There are, of course, significant exceptions.

According to the 2012 census, the elderly population aged more than 60 years in the Jaffna District is only marginally higher than the national average. It would definitely be higher if the elderly Jaffnaites (a mix of Diaspora and those settled in Colombo) could be induced to move to their first-choice location by the provision of superior healthcare facilities in the North. New private healthcare facilities such as the Northern Central Hospital3 have emerged. If the many successful Diaspora doctors with roots in Jaffna choose to invest in hospitals/eldercare facilities/associated training facilities, the demand can be met and significant employment opportunities can be created. It is possible that this could be leveraged into medical tourism opportunities, with both the US and the fast-growing Bay of Bengal region targeted as key markets.

The end of the internal conflict in 2009 saw a boom in domestic tourism to the Northern Province. To cater to the demand many guest houses and hotels of uneven quality emerged. Higher-quality hotels such as Jetwing Jaffna and The Thinnai have opened recently, resetting quality benchmarks.

A majority of the visitors to Jaffna include Jaffnaites now resident in Colombo or abroad. They visit primarily for family or religious reasons. Other Sri Lankans and foreigners are still a minority.

The North is visually different from the rest of the country and offers a different cultural experience. Therefore, it has the potential to be developed into a new component of Sri Lanka’s rich tourist offering, now made up of beaches, nature, and history. Yet the region has failed to attract international and local tourists on a large scale. The region’s tourism underperformance is most likely due to the lack of adequate tourism infrastructure and the absence of an effective marketing effort. 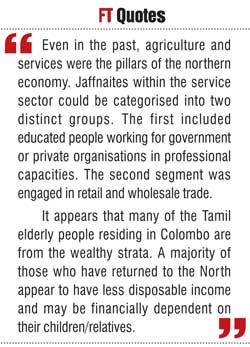 In addition to promoting visits to cultural/heritage sites, experiential tourism could be promoted. Tourists increasingly seek authentic experiences so that they can connect with the history, people and culture. Social media based marketing and accommodation and facilities that bring tourists close to the people through platforms such as Airbnb are likely to be the most effective in this regard. Promotion of eco- and agri-tourism would also benefit other sectors namely agriculture and fisheries.

There is also a demand for wellness-oriented tourism. Tourist are looking for healthy, meaningful and rejuvenating tourism options to keep them fit and energetic. Packages that include traditional remedies and treatments such as Ayurveda could attract a number of visitors. Increasing number of wellness tourists are expected from within the Asia-Pacific regions which including China, South Korea, Japan, Thailand, New Zealand, Australia, Malaysia, Taiwan etc. However, India is already a major competitor in this segment.

There is value in establishing a hotel and tourism training school in Jaffna, possibly directly articulated with a private hotel chain to support higher quality standards in all forms of tourist accommodations.

Labour participation among men in the Northern Province is higher than the national average. Women’s labour force participation is low across the country, and noticeably low in the Jaffna District.

It appears that many young people leave the Northern Province for Colombo or abroad due to lack of employment opportunities within the region. The unemployment rate in the North is higher than in the rest of the country.

Potential exists for the development of Jaffna as a second tier IT city. Youth in Jaffna are tech savvy and highly enthusiastic about ICTs. Volunteer organisations are actively creating awareness and interest on IT entrepreneurship among Northern youth. The Budget Speech of 2017 has announced a 200% capital allowance for businesses starting up in the North. If the Diaspora’s capacity is also effectively utilised at this stage, more start-ups such as the flourishing Extreme SEO5 are possible within the region.

Telecom connectivity is precondition for IT and ITES. The SLT fibre is running to Jaffna,6 though most likely overpriced and discriminatory. If the regulatory problems can be solved, telecom connectivity should not be a deal breaker except for BPOs where tasks are time critical. For them, the existence of a single supplier and a single “pipe” will be unacceptable. Unless that problem is addressed all that is likely to emerge in Jaffna are non-time-critical IT and ITES firms. The other precondition for successful IT and ITES is ability for foreign principals to get to the location from the airport quickly. Jaffna at present cannot satisfy this condition. For this, Palaly has to be developed as an international airport, with scheduled domestic connections from Katunayake as an interim solution.

Reliable continuous power could be a problem in Jaffna, but it is solvable with 100% redundant generator backup. Transport for the employees will have to be addressed as well. Until Jaffna infrastructure comes up to required standards, there is a good case for a business park where companies can start operations with minimum hassle.

Historically, Jaffnaites were well known for their retail and wholesale trading activities across the country. Today, most trading activities in Jaffna are conducted by the older generation. They operate as conventional brick-and-mortar businesses, without new investments, expansion and technological upgrades.

Potential exists for investments and innovation in trade, especially the incorporation of technology. Given the remittance economy and better access and connectivity amongst youth there is scope for e-commerce as well.

Government-owned tertiary educational entities do not adequately cater to the demand. The well-to-do move out of the region to acquire academic and professional qualifications. Potential value could be created by developing private educational options, ideally utilizing online elements in conjunction with the traditional.

4. The Northern Province comprises five districts, with heterogeneous characteristics.  The Province as a whole does not present as good a picture as the Jaffna District.