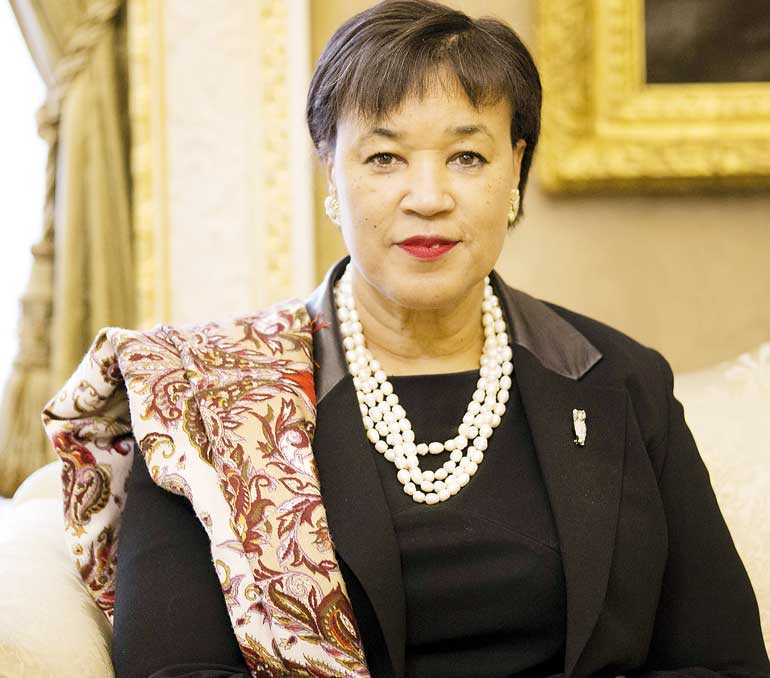 Commonwealth Secretary-General Patricia Scotland assured to support Sri Lanka to promote good governance and rule of law. “We stand ready to support Sri Lanka in any request it may put forward with regard to promoting good governance and the rule of law,” she said, adding that the work of the Commonwealth was demand-driven and it only provided technical assistance when it was requested by governments. Commenting on judicial corruption she said corruption could be a significant threat to rule of law in all Commonwealth countries and it must be tackled head-on in order for people to feel confident that their disputes would be addressed fairly. Scotland was in Colombo heading the biennial Commonwealth Law Ministers Meeting held under the theme ‘Equal access to justice and the rule of law’ recently. Law Ministers and Attorneys General from 53 countries gathered to discuss how to tackle barriers to access to justice, such as cost and poverty, distrust of the justice system and corruption. Scotland in an interview with the Daily FT said that the Commonwealth had drafted a set of anticorruption benchmarks covering 25 areas designed to help governments and public sector bodies measure their anti-corruption activities, and make improvements if needed. Excerpts of the interview:

Q: Why was Colombo chosen to host this prestigious event?

A: Sri Lanka graciously offered to host this event two years ago at the 2017 Commonwealth Law Ministers meeting held in The Bahamas. As the oldest democracy in South Asia, it was a fitting choice – the country has much to share in terms of experience and expertise in this area.

Q: Equal access to justice is a major target of the Sustainable Development Goals of 2030 and the Commonwealth Charter as well. How does the Commonwealth plan to reach this target in its countries by 2030?

A: At the Commonwealth Law Ministers Meeting held in Colombo recently, ministers resolved to take action at the national and Commonwealth levels, to achieve the targets related to peace, justice and strong institutions under the Sustainable Development Goals (specifically SDG 16).

Commonwealth ministers will also look at assessing the legal needs and barriers to access to justice in our countries, while seeking out people-friendly approaches to address those barriers, including the use of technology to provide access to legal services as well as enhanced delivery of justice service.

The fact that our countries share the common law as well as a common language, system of governance and common values, can help in building consensus on joint actions. It also facilitates the sharing of experiences and best practices on rule of law issues, with a view to enhancing access to justice for the peoples of the Commonwealth.

A: Increasingly, countries in the Commonwealth recognise that justice does not have to be delivered strictly in a courtroom – although every person should have the right to a fair trial. It is important to be aware that there are multiple paths to justice that can involve alternative methods dispute resolution – for instance, mediation, restorative justice, community-based approaches and even e-courts and other technology-based solutions that are viable, sustainable and efficient. These present new opportunities to access justice in a way that is timely, fair and convenient for the ordinary person.

Addressing the needs of vulnerable groups, including those who may have faced discriminatory treatment in the justice system, is crucial in building trust.

Q: 1.4 billion people do not seek justice due to costs of legal services, complex legal language, lack of access to legal aid etc. Did the Commonwealth address this issue at the conference and what potential solutions including innovative technologies were discussed?

A: The keys to solving the access-to-justice crisis can be summarised in three steps: informing people of their rights and how to go about solving a dispute, assisting them with the right legal services and providing access to a problem-solving ‘judge’ (which may or may not be based in a formal court).

To achieve this, the Commonwealth Law Ministers discussed a number of solutions, including new technology, people-focused justice systems, specialised justice and legal services, and problem-solving courts and institutions.

At the same time, technology brings about certain risks, for instance in cybercrime, and new issues, such as data protection and authenticity and admissibility of electronic evidence. The Commonwealth supports international cooperation to tackle international crime through a network of focal points in all member countries.

Q: How will the Commonwealth assist the member countries to reach disadvantaged populations, including low and middle-income populations, people with disabilities, rural communities, indigenous peoples and refugees?

A: Solutions that were discussed at the Commonwealth Law Ministers Meeting include people-friendly approaches and specialised judicial services. For instance, ‘one-stop shops’ can offer a range of legal and justice services to clients, without them having to be referred to multiple service providers, costing precious time and money. An example would be a family justice centre that offers comprehensive medical, legal, counselling and social services to victims of domestic violence.

Targeted legal services also prioritise the use of public funds for those facing the most severe problems, or those with the least access to assistance. Mobile courts or e-courts can make it easier for people in rural or hard-to-reach areas to access justice.

Another example is problem-solving courts or approaches that view legal needs in a more holistic way, seeking to tackle the root causes of a legal problem, such as mental health issues. This can bring about more sustainable outcomes and help avoid re-offending.

Commonwealth countries have implemented innovative approaches to address the needs of indigenous people, taking into account traditional justice systems, and law ministers have shared some examples at their meeting. The Commonwealth will endeavour to disseminate further theses good practices which can be replicated in Commonwealth jurisdictions.

Q: It was said that serious corruption and interferences in Sri Lanka’s judicial process by the politicians have tarnished the country’s judicial system that was once respected for its integrity. Any comments?

A: Corruption can be a significant threat the rule of law in all Commonwealth countries. Corruption must be tackled head-on in order for people to feel confident that their disputes will be addressed fairly. In this regard, the Commonwealth has drafted a set of anticorruption benchmarks designed to help governments and public sector bodies measure their anti-corruption activities, and make improvements if needed.

The benchmarks cover 25 areas, including one on corruption in the judiciary. They will be submitted for final approval to Commonwealth Heads of Government at their biennial meeting in June 2020.

Q: What is the support that the Commonwealth provides to strengthen the rule of law in its member States?

A: The Commonwealth works with member governments to strengthen their justice systems by supporting their institutions and promoting the adoption of best practices. We assist with law reforms in our member countries by building national capacity in legislative drafting. We provide practical training for investigators, prosecutors, judges, court administrators and other justice officials.

We also provide advice on judicial reforms including guidelines on criminal and civil procedures. Through the Commonwealth Fund for Technical Co-operation, we send legal and judicial experts to our member countries.

The Commonwealth Office of Civil and Criminal Justice Reform (OCCJR) supports Commonwealth countries in delivering access to justice and sustainable development through the creation of fair and effective national laws.

The Office makes available good legislation practice from across the Commonwealth through model laws, standards, templates, legal insight, and legal networks. It delivers technical assistance to member countries based on these resources.

Q: Drafting the new Constitution has been delayed due to opposition from various segments of the country and how does the Commonwealth assist the Government in this situation?

A: The work of the Commonwealth is demand-driven – we only provide technical assistance when it is requested by governments. We stand ready to support Sri Lanka in any request it may put forward with regard to promoting good governance and the rule of law.