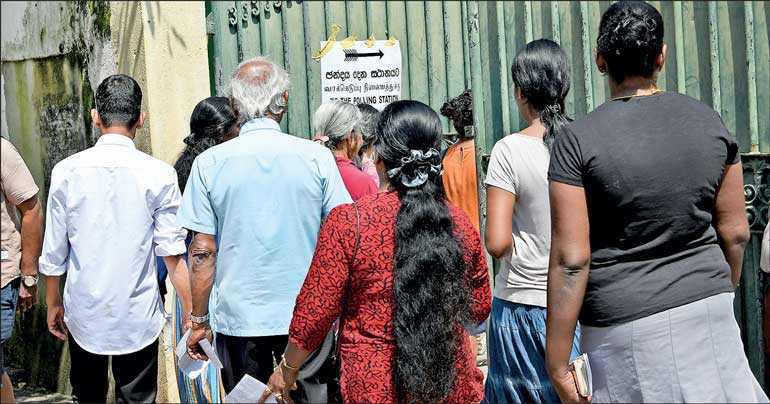 The voters should change their attitudes and refrain from approaching any National level MP to solve their local problems. This change of attitude will automatically happen if the Government ensures good governance in the most important public institutions – Pic by Shehan Gunasekara

As we all know, the ‘Yahapalana’ Government failed to introduce the promised electoral reforms. Therefore, in the wake of the forthcoming General Elections, I as a concerned citizen, wish to enlist simple proposals for electoral reforms together with benefits accruing therefrom to the country and reckon that they can be introduced with the 20th Amendment without going for a referendum.

1)Repeal the infamous, optional ‘Preference Voting System’ and introduce a District merit list of nominees (please also refer 3 c below). Accordingly, there will be no need for aspiring MPs to hunt for ‘preference votes’ by resorting to unethical and wasteful measures. The poster/banner war among candidates that also becomes an eye sore during General Elections will also be eliminated thereby preserving the environment. The election campaign will be solely financed by the party/alliance allowing the expenditure to be assessed and monitored by the authorities.

2)The present decentralised political administration structure should be made more productive by specifically laying down the role responsibilities and limits for the respective layers in the political pyramid viz. the Parliament, Provincial Councils (PCs) and Pradeshiya Sabhas (PSs) to avoid overlapping of job roles. In our view, there is a dire need to reduce the ancillary powers of MPs who are mainly ‘law-makers’ and transfer them to the  PCs and PSs who should work more closely with the public than the National level MPs. In the process, PCs and PSs which are presently labelled as ‘white elephants’ can be converted to effective development facilitating bodies receiving day today feedback from grass root levels and the media. The MPs as ‘law-makers’ should not go beyond their main job role but may monitor the usage and recommend the allocation and release of decentralised funds to the lower layers of the pyramid through the existing monitoring mechanism at  district development committee level that should be reviewed to facilitate a ‘bottom-up’ approach. As a result, it will greatly reduce the existing demand for hardy and luxury vehicles by MPs and ministers wanting to travel frequently to the provinces. Also, they need not be allocated with ‘decentralised funds’.

a)  The primary requirement of a National Election exercise in Sri Lanka is to determine the winner and the number of seats won by each party/alliance out of 225 seats in the Parliament. It can be simply and rationally found by applying proportionate arithmetic to the total valid National vote considering the entire country as one electorate of ‘Sri Lankans’ having an equal value for all valid votes. This will reduce the undue importance attached to the laborious and costly delimitation exercises preceding a National Election. Since Sri Lanka is a small country yearning to emerge as a modern representative democracy, equality in vote value should not be compromised for differences arising out of petty ethnic, religious and caste considerations at a National Election. This measure will discourage contesting by several small political parties based on such considerations and encourage them to join the main parties that will contest as alliances thereby promoting ‘Sri Lankan’ identity.

b) The total number of seats won by each party/alliance at National level can be apportioned to districts simply by applying proportionate arithmetic to district-wise number of votes mustered by each Party/Alliance.

c) Thereafter, nominating MPs to each district will be automatic as district wise nomination lists in merit order (duly registered on nomination day by each party/alliance) are already available and known to the public. Presently, this list is furnished in the alphabetical order to cover only 196 seats. The real objective of the ‘National List ‘(29) as well as of women and youth representation can be achieved by parties/alliances giving such categories, high weightages under a structured interview system so that the final district wise party/alliance nomination lists in merit order will cover all such National requirements in one go. If necessary, adding three or four extra nominees (also in merit order) to the bottom of each district merit nomination list to provide for resignations/deaths/expulsions may be allowed for registration. For all purposes, it is crucial that the full lists are seen by the voter in the order of merit so that before casting the vote he/she should get a clear idea of the calibre and the quality of the persons who are likely to represent him in the National Parliament.

Thus, the sole responsibility of selecting political professionals in merit order will fully devolve on the respective parties/alliances and not on the voter. For this purpose, as corporate bodies, they should evolve an unbiased, transparent, structured interview system, based mainly on a set of basic eligibility criteria and the National imperatives such as women/youth representation laid down by the Election Commission plus other criteria recommended by civil rights organisations such as PAFFREL, CaFFE and CMEV to select their nominees.  As a result of having  ‘district wise merit lists’, the ballot paper will carry only the names and symbols of parties/alliances, making the voting process absolutely simple. The spin-off effect will result in the Elections Department having less work in the counting process and enabling the people to know the election results by midnight!

4) As aforesaid, in a modern representative democracy the voter expects the political parties to be corporate bodies with ability to produce powerful manifestos and pragmatic action plans for the party/alliance. Since the ‘election manifesto’ becomes a critical factor for voter decision, it has to be made a legally-enforceable document.

5) With this district merit list in place, the ‘cross-over’ mockery also will die a natural death as in the event of death/resignation/expulsion of an MP, the next person in the merit list will get automatically appointed. However, in our view this ‘crossover’ farce needs to be sealed constitutionally without leaving any legal loopholes.

6) To reach the ultimate level of ‘Sri Lankan identity’, apply PR arithmetic to allocate the constitutionally specified number (30) of cabinet portfolios, so that all seat winning parties will be represented in the cabinet. This will ensure cabinet portfolios to smaller parties like TNA and JVP and in the process, answer the promised ‘+’component of the much maligned 13th Amendment which has become irreversible due to its international implications.

7) The present provision for Parliament to increase the number of cabinet portfolios in the event of forming a ‘National Government’  should be replaced with a specific, tolerance limit of say +5 to the constitutionally specified number.

9) Dictatorial powers, if still remaining of the presidency, should be removed in keeping with the much maligned public outcry.

10) To derive maximum cost-benefit for the country as well as to obtain rational election results from the voters, the Presidential Election and the National Election should be held on one specified day enshrined in the Constitution. However, the public outcry for the last two-and-a-half decades has been to abolish ‘executive presidency’.

11) Similarly, it is rational that the Provincial Council Elections too be held on one legally specified day after effecting suitable amendments arising from these proposals.

a) Given a decentralised political administration system of governance, it is necessary to rationalise the number of MPs (225) through a proper work study based on well-defined objectives and role responsibilities. Examples from countries in the region need to be taken in to account in order to constitutionalise a formula of one MP for ‘X’ no. of registered voters. In our view even the present 225 is an unproductive assemblage.

b) MPs’ salaries and perks should be recommended by an independent committee comprising productivity and work study experts. MPs colluding to increase their own salaries and perks is tantamount to a ‘conflict of interest’. Moreover, there is a public outcry to remove or at least review the existing pension scheme for MPs that simply allows them to receive a lifetime pension by merely completing five years in the Parliament.

Need for a new political and media culture

The above measures elicit a paradigm shift in the political/media culture, approach and attitudes of both politicians and the people. The voters should change their attitudes and refrain from approaching any National level MP to solve their local problems. This change of attitude will automatically happen if the Government ensures good governance in the most important public institutions viz. the Police Service, the Judiciary and the Government service. In extreme circumstances, a voter may approach a local PC or a PS member to point out administrational delays.

The presence of patriotic, political professionals who place the country first in their agenda will no doubt take the Parliament from ‘confrontational politics’ to one of ‘consensual and rational politics’ allowing the country to develop in harmony. In this scenario, what is best for the country will always happen and the question of hung Parliament will become a misnomer.

The intelligent tax payers/voters now yearn for their money to be invested on a simple, low cost and meaningful electoral system without bringing in more and more complicated adjuncts to the existing system.

The mass media and of late, the social media solely possess the power and stamina to bring about this most crucial paradigm shift. Towards this end, we appeal to the media to shift their overt attention from parliamentarians and report country’s provincial and local development efforts with a ‘positive and patriotic outlook’ coupled with a well-balanced reportage devoid of popular, sensational and ‘one-upmanship’ in reporting.