Home / Opinion and Issues/ An appeal to fair and impartial posterity

An appeal to fair and impartial posterity

Gautama Buddha in one of his discourses stated: “The wheel of life and death is kept turning by the three poisons of greed, hatred, and stupidity. By cutting off the three poisons, we can escape the wheel and become enlightened.” And Mahatma Gandhi said: “Earth provides enough to satisfy every man’s needs, but not every man’s greed.”

After a calamitous five years of ‘leadership’ by the incumbent President, it was indeed hilarious and uproarious to hear an announcement, out of the blues, that he, Maithripala Sirisena, is now neutral. This annunciation should have been made when he was established in power in January 2015.

But to the contrary, he developed an extraordinary close relationship with everything and everyone, that was well and truly against all forms of human decency; he had well and truly and promiscuously done away with politesse – a courteous manner that respects accepted social usage – he is something what you would describe as “a Janus-faced politician” having two sharply contrasting aspects or characteristics. 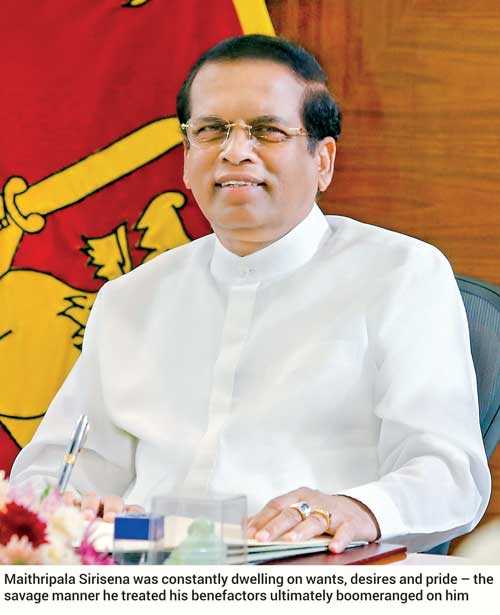 A character insincere and deceitful – never has the world witnessed a pathetic individual who had destroyed his fame and political future wantonly, because of the underlying venomous hatred he had against an individual and that too the man responsible for establishing him in the seat of power.

Not forgetting, of course, the late Ven. Maduluwawe Sobitha Thero who was indeed instrumental in orchestrating and bringing about this drastic change. It is indeed very strange that such a great man was totally ignored by Maithripala Sirisena and he never even mentioned his name on any occasion.

Maithripala Sirisena was constantly dwelling on wants, desires and pride – the savage manner he treated his benefactors ultimately boomeranged on him. That was the punishment he received for disrespecting such a great personality. He is now reduced to a non-entity. A man who could not even contest for a second time, let alone hold office like all the other past presidents.

He was drowning under the impression that the different privileges he enjoyed to the prejudice of others; such as that of being more honoured, more powerful or even in a position to exact obedience. He believed it’s his wit, skill, merit, talents and the power he wielded are the only qualities capable of commanding respect. It now became his interest to appear as what he really was not.

In spite of all his public utterances on morality, he and his henchmen would have never been better than monsters, because nature had not bestowed on them a sense of compassion, to aid their reason. He was intrepid – invulnerable to intimidation.

From this mental attitude sprang insolent pomp and cheating trickery, with all the numerous vices that go in their train. He cannot go it alone, hence his decision to support the criminal fraternity blatantly without compunction.

He did not for a moment realise that he was being manipulated and was brought into subjection; and he and his supporters became in some degree slaves, so much so that their thraldom did not enable them to do without one another.

Sirisena went out of his way to support anarchy and despotism. He stood by those men who usurped boundless power. Those that established courts tolerating no appeal, those who created a situation where people were taken into custody based on mere suspicions, with judgments without due process, with numberless incarcerations and judicial murders. This is where he found sanctuary.

He proclaims his unstinted support for the Sri Lanka Podujana Peramuna (SLPP) presidential candidate to the detriment and destruction of the Sri Lanka Freedom Party (SLFP).

He provided patronage to those who spewed hate and venom, in their blatant insults against the United National Front as well as against other candidates competing, demonstrating his sly and artful, imperious and cruel behaviour.

Our duty as citizens

We the citizens of this country have experienced and have undergone immense suffering for over a decade – a state of criminal lawlessness and disorder, under the leadership of politicians, who became filled with avarice, ambition and vice and suppressed the cries of natural compassion and the still feeble voice of justice.

We know now the true danger of the serpent lurking beneath our politics. And we the people of Sri Lanka will not want anarchy or despotism to reign over us, once again.

Since we are now on the track of having to elect a new leader, our duty is to observe the discourses and see what we need is to find the string that connects us, a future for all and someone who uses his leadership to strengthen our participation in the reconstruction of our precious country, not someone whose main aim is to defeat another political party.

It is not only our right but a responsibility to elect the right set of people to administer the functioning of the country and to elect only those who will perform their duty towards the nation.

In recent years, corruption, thuggery and malpractices have grown to a great extent in all spheres of life, very much more so in politics. But then the people we choose to run the Government are from among us. People must realise that they need to elect a relatively good leader to run the country.

Unfortunately, the trend of not voting is evident mostly among the educated. Quite the contrary are the less educated and the illiterate who make it a point to cast their vote. It should not be forgotten that they are also easy prey to be bribed by politicians.

In spite of all his public utterances on morality, he and his henchmen would have never been better than monsters, because nature had not bestowed on them a sense of compassion, to aid their reason

With the maximum number of the not-so-educated casting their vote, there are strong possibilities of tainted and corrupt leaders being elected to run the country. It is high time the educated citizens realise this and step in to make a difference so as to bring down the level of corruption and malpractices in the system.

Today, we continue to live in a culture where people remain motivated to avoid appearing blameworthy and quickly point their fingers at anyone but themselves when something goes wrong. So, instead of just blaming others, we, the people should come out and vote, exercise our right and express our views. Democracy in our country will be effective only when people will vote wisely.

Now, we are ready to use our hands and brains to build our dreams; and it is time we trust, respect, and care for each other like we never have before. We don’t care about ideas or backgrounds anymore. We are looking forward, to our future.

We want a country where we can all share and grow, regardless of our political tendencies and social class.

Whether you favour one party, or the other, or stay in-between, never allow hate into your bonds. With the passage of time, a little toxic can turn into a disastrous crisis. The only solution is not letting ideals poison your society.

The future that our grandchildren deserve is possible only if we start to recognise the things that we have in common instead of searching for anything that divides us. If we keep fighting fire with fire, we will all make this country a hell and we too will not be spared by the fire of hell. But if we learn to cooperate for our collective benefit, we will save what is left and allow ourselves to build a prosperous future for us all.