Tamil National Alliance (TNA) leader R. Sampanthan has called for all Sri Lankans to come together and resolve the problems of the Tamil people, insisting the community continues to aspire for an equal and just rule in an undivided and united nation.

Addressing a distinguished audience who had gathered for the launch of a book on Minister of Finance Mangala Samaraweera’s three decades in politics recently, at the Rabindranath Tagore Auditorium of the University of Ruhuna, TNA leaderR. Sampanthan stressed that the Tamil people had never supported the division of Sri Lanka.

“There isn’t a better occasion than an event where Mangala Samaraweera, a champion of peace in this country, is being felicitated to bring this matter to the notice of the people of the South and the whole country that I as a Tamil and a leader of the Tamil people said in Matara that we should all come together and resolve this issue in the interest of all our people and the country.”

Sampanthan also said that the Tamil people, although they have ahistory of their own, never demanded separation or for that matter evena federal arrangement. “The Tamils only demanded an equal and justrule in an undivided united country.”

An abridged version of his speech is given below. 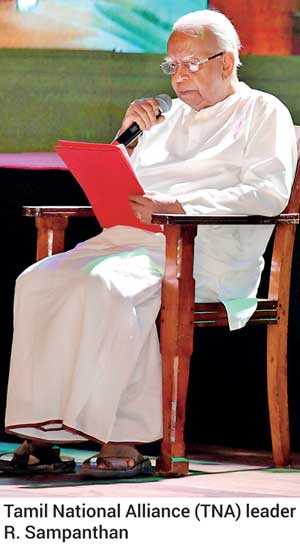 Our path ended in the hands of the majority community andLanguage,Land, Education, Economic development, employment became issues. Whenthe Tamils demanded their rights they were subjected to violence. Theydid not retaliate; they did not repeal the protection of the law. Theystarted leaving the country and today more than 50% of the Tamilpopulation who lived in the country have left the country.

The LTTE emerged in the 1980’safter the rights of the Tamil peoplewere denied, agreements were breached and violence unleashed againstthe Tamils. The Tamils were not given legal protection.The Tamilissue was a serious issue in the country well over 30 years before theLTTE appeared on the political scene. During the 30 year war the LTTEdemonstrated its full ability and potential but was eventuallydefeated in 2009.

Various efforts have been made to resolve the national question ‘theTamil issue’.All-party talks, Thimpu talks, Indo-Sri Lanka agreementand the 13th Amendment to the constitution were some of the stepstaken.

After the enactment of the 13th Amendment to the Constitution,President Ranasinghe Premadasa appointed the Mangala Moonasingheselect committee. He chose as the Chairman of the select committee aleading member of the Sri Lanka Freedom Party (SLFP) to bring about aconsensus.

President Chandrika Bandaranayake Kumaratunga came up with the 2000August proposals in which Mangala Samaraweera played an activerole. There was the ‘Sudu Nelum Movement’which carried out a verystrong and effective earnest campaign throughout the country toexplain to the Sinhala people the need for power sharing arrangementsto be effective in this country to bring about unity and amity betweenall the people who lived in this country. Mangala Samaraweeraplayed a leading an active role in formulating and implementing thatprogram.

Then we had President Mahinda Rajapaksa who came up with manyproposals. He made an excellent speech in July 2006 in which he saidthat the only way the problem could be solved is by maximum possibledevolution, as people should have the power to determine their destinyin the territory in which they lived. He wanted a multi-ethnic expertcommittee appointed to study patterns of devolution in other parts ofthe world and come up with their proposals.

A few days after the end of the war, the Secretary General of theUnited Nations Ban Ki-Moon came to Sri Lanka. President MahindaRajapaksamade a commitment to come up with a proposalthat would beacceptable to all the people and bring about effective power sharing.

After the present Parliament was constituted, a resolution wasunanimously adopted converting the Parliament into a Constitutional Assembly, and appointing a Steering Committee and sub Committees to

handle the issue. The Steering Committee and the sub Committees havebrought their reports to Parliament and the Constitutional Assembly.But somehow things don’t seem to be moving. One does not know why. Cana resolution unanimously adopted by Parliament be reduced to naughtand the same Parliament continue to be the whole country’s supreme law-making body?

The armed conflict ended in 2009.Until then there was some sort ofmovement.Commitments were made to the international community thatonce the LTTE was defeated, that there would be a reasonable politicalsolution. The forward movement during the tenure of PresidentsRanasinghe Premadasa, Chandrika Bandaranayke Kumaratunga andPresident Mahinda Rajapaksaclearly indicated it.

But now everything seems to be dead. No expectations are anydifferent. In this background it appears to be that two questionsarise.

The first is, can there be forward political movement only in the wayof armed conflict and is it the expectation of the world?

Countries like India, America, the European Union, the UnitedKingdom, Japan and several other countries in the world over not onlybranded the LTTE as a terrorist organisation in their countries but

impeded them and prevented them from carrying on an armed struggleagainst the Sri Lanka Government.

That was on the basis of the Sri Lanka Government’s commitment that theLTTE was an impediment toresolving of the national question tonegotiations and that once the LTTE was militarily defeated that theywould bring about an acceptable political solution.

The next question that arises is, can a national question that haslasted for seventy years, ever since the country became independentand a severe armed conflict that lasted over thirty years, which even

brought foreign forces to our country, which resulted in severalcommitments being made at different stages, to be forgotten and sweptaway, or is it compulsory for all right-thinking Sri Lankans to come

together to bring this old question to a satisfactory conclusion?

I raise this question as a Sri Lankan as I want to work with myfellow Sri Lankans to resolve this conflict within a frame work of aunited,undivided, andundividable Sri Lanka which could be the bestthing for Sri Lanka.

If there is a non-violent campaign by the Tamil people for their rightsbased on the lines of ‘Sathyagraha’ will the human rights of the Tamilpeople be once again violated? And if that happens what would be theconsequences?

Can the country come out of its current economic crisis to under thetable to politically and economically present a different image of thecountry to the whole world?

Do our people to have to continuously endure a poor quality of life onaccount of the follies of those who govern them?

We know of countries in our region that have progressed such asSingapore, Malaysia, Cambodia,Vietnam and even Bangladesh isprogressing when we are lagging behind and our people are suffering

with a minimum quality of life as we are unable to do the right thing.Put things right in this country and there will be investment anddevelopment in this country which would give are people a better

Our stature and standings is deteriorating day by day and we shouldnot allow this to continue.

Mangala has discharged his duties competently and efficientlywith honesty and integrity in every portfolio he was entrusted with.Mangala has been also quite outspoken and forthright both nationallyand internationally on human rights.

There wasn’t a better occasion than an event where MangalaSamaraweera, a champion of peace in this country is being felicitatedto bring this matter to the notice of the people of the south and the

whole country that I as a Tamil and a leader of the Tamil people saidin Matara that we should all come together and resolve this issue inthe interest of all our people and the country.