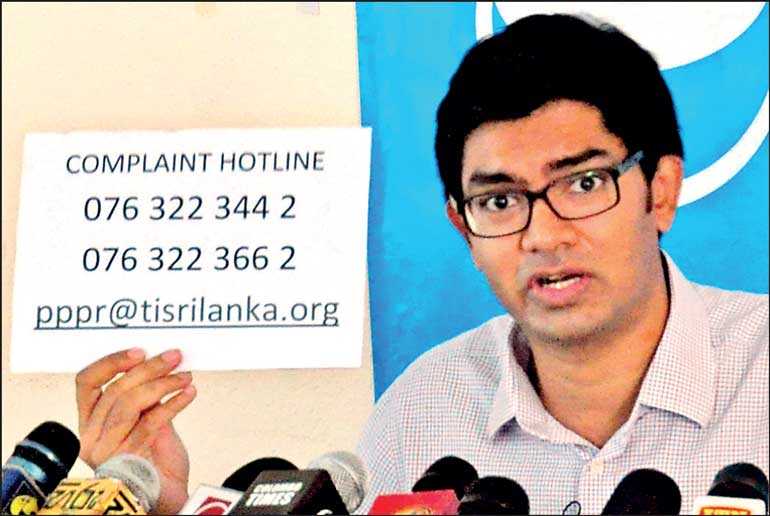 Speaking to media at the TISL Head Office, Executive Direct Asoka Obeyesekere said complaints could be submitted by calling 0763223662, 0763223442 or via email to pppr@tisrilanka.org.

According to Obeyesekere, the Program for the Protection of Public Resources (PPPR) of TISL has played a significant role as an election monitor since 2002 and the program been successful in shining the spotlight on misuse of State resources during election campaigns during that time.

“Ahead of the presidential election, the PPPR has mobilised district level observers and they will be responsible for coordinating 160 observers in each electorate in the country. The observers will be on alert round the clock and will engage with the public to collect information on the possible misuse of public property,” Obeyesekere said.

Obeyesekere requested all candidates, political parties, public official and the media to ensure compliance with regulations and circulars issued by the Election Commission (EC). He particularly highlighted directions contained in the Extraordinary Gazette notification issued by the EC, number 2141/52 on 19 September.

“The Gazette notification provides clear directions on the conduct of public officials, the use of State-owned vehicles and buildings and the conduct of special events amongst other things. All public officials ranging from those working in Local Government authorities to those employed at state-owned Enterprises must be aware of the strict penalties.”

He noted several public officials have been convicted in recent years for misuse of public property during election time. “We hope such instance will serve as a deterrent and will encourage those currently in public service to safeguard themselves from political interference.”

He noted they had already received several complaints including an instance of a State bank being accused of giving appointments on political bias. He said the TISL had already filed a complaint with EC over the incident.