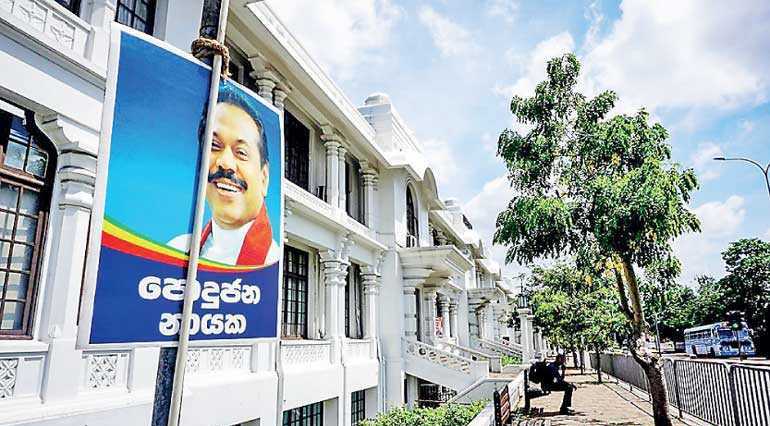 The National: Editorial independence was lost in just a half hour at The Sunday Observer, the weekly English-language newspaper where until a week ago, well-known Sri Lankan journalist Dharisha Bastians served as Editor.

On 26 October, at 7.30pm local time, Mahinda Rajapaksa was sworn in as Sri Lanka’s new Prime Minister, in an unconstitutional swoop on the premiership, endorsed by President Maithripala Sirisena. Thirty minutes later, his supporters stormed state media publications that since Rajapaksa’s presidential election defeat in 2015 had experienced greater press freedom than ever.

Led by a former information minister, trade unionists from Rajapaksa’s Sri Lanka Podujana Peramuna party entered newsrooms across Colombo’s Lake House, Sri Lanka’s version of Britain’s Broadcasting House, taking control of five newspapers. They are now run by Rajapaksa loyalists. Posters of Rajapaksa next to Sirisena are splashed on the front of the building.

For government-controlled organisations to switch allegiances with a new government is normal in Sri Lanka, but those who were present say this was different to previous transitions; a forceful takeover before Parliament has confirmed Rajapaksa as Prime Minister.

“They started marching along the corridors, these big men in shorts,” said Bastians, who also works as a correspondent for The New York Times. “They started going into editorial [newsrooms], changing pages, cartoons, editorials, everything,” she said. “We thought it would be more streamlined. But this was a hostile takeover.”

Pro-Rajapaksa enforcers also took over two public TV channels, Rupavahini and ITN, threatening to attack its deputy editor Subhash Jayawardena if he did not leave.

The Rajapaksa heavies also forced scared staff at three newspapers to lavish front-page praise on the new Prime Minister for muscling his way back to power.

A day later, they asked that Bastians surrender editorial control of the Observer for its Sunday edition. A Minister in Rajapaksa’s team called the paper, telling a staffer: “I hope you know who took over as Prime Minister yesterday.” Bastians quit the same day.

“I was not willing to be coerced into toeing an editorial line, and I am therefore unable to take responsibility for tomorrow’s edition,” she wrote on Twitter.

The bid by Rajapaksa allies to normalise his takeover is working, journalists said. Television stations and newspapers do not carry news of the constitutional crisis, nor that side-lined Prime Minister Ranil Wickremesinghe is holding out at his Temple Trees residence.

Observers say the assault on the Sri Lankan press shows that Rajapaksa’s return to rule is likely to be autocratic.

“The cavalier attitude and complete disregard for democratic processes demonstrated by those in the Rajapaksa-led government has emboldened supporters to act in this manner,” said Roel Raymond, a journalist in Colombo for South Asian news site Roar Media. “The aggression shown by trade unions supporting Rajapaksa this time, after he was unconstitutionally appointed as Prime Minister, indicates an undesirable return to that culture of toxic impunity.”

Press freedom was not a given before Rajapaksa came to power as President in 2005. In 1989, the Chairman of the country’s Independent Television Network, Thevis Guruge, was killed by members of the Janatha Vimukthi Peramuna communist party for refusing to align with them. But press freedom organisations say intimidation, harassment and assault on journalists increased markedly during his presidential tenure.

Lasantha Wickrematunge, former Editor of weekly newspaper The Sunday Leader and critic of the Rajapaksa family, was shot dead in Colombo in 2009. Due to give evidence about alleged corruption of Rajapaksa’s brother, Gotabhaya, then Defence Minister, four men on motorcycles surrounded his car and opened fire. His death was described as the “biggest blow” yet to Sri Lankan press freedom.

Rights groups blamed Rajapaksa’s government for Wickrematunge’s death, accusing it of inciting hatred against him and failing to stop attacks on journalists. That is why his return is so galling for press advocates here. His return haunts them, reviving memories of the darkest hours of his presidency.

“The current situation in Sri Lanka is very worrying. This is both unacceptable for working journalists and dangerous for the whole society,” said Daniel Bastard, head of Reporters Without Borders’ Asia-Pacific desk, who calls Rajapaksa one of the biggest “press freedom predators” in the world.

“We call on all political leaders in Sri Lanka to act with responsibility in letting reporters do their work and report freely from all sides,” he said. “This is the best way to ensure democracy is respected and to prevent this political crisis from becoming a bloodbath.”

More worrying for those here, is that the wider situation in the country is likely to deteriorate. Residents of Colombo and rights groups express anxiety that Rajapaksa will reinvigorate ethnic and religious tensions, crush dissent, and do whatever it takes to consolidate power, like the takeover of Lake House.

Bastians said journalists know of life under Mr Rajapaksa. Journalists should never be the story, they often say, but the Sri Lankan strongman has sought to make them exactly that to protect himself from accusations of corruption, mismanagement, and serving as a bedfellow for Beijing.

After Bastians helped to report a bombshell New York Times report in June, which revealed how Mr Rajapaksa effectively handed China a deep sea port in his hometown of Hambantota in return for billion dollar loans, handcuffed with high interest rates, he held a press conference, naming her. His team held up a photo of Bastians, singling her out.

She received “crazy intimidation” and was slandered on social media. The Times stood by her, but the intimidation lingers, and could get worse now he is back in power, at least until Parliament votes on the premiership.

“This happened in opposition,” she said. What could follow with Rajapaksa firmly in power scares her more. (Source: https://www.thenational.ae/world/asia/sri-lankan-press-freedom-crushed-following-mahinda-rajapaksa-s-return-1.787836)