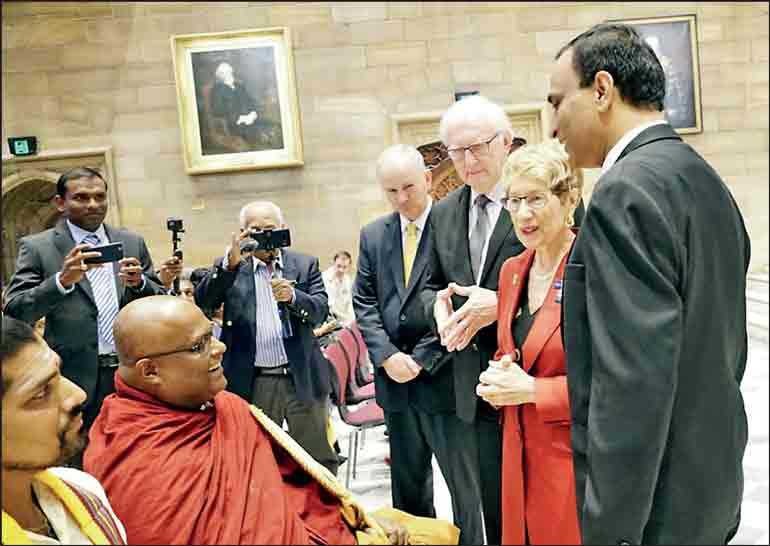 A large gathering of over 350 people were present for the Independence Day reception conducted at the Consulate General Office in Sydney.  Governor of the NSW Government Margaret Beazley, AO QC, and her spouse Dennis Wilson, were the Chief Guests of the event.

In addition, Minister of Finance and Small Business Damien Tudehope represented Premier of New South Wales, Parliamentary Secretary to the Treasurer and Leader of the Legislative Council Scott Farlow represented the Acting Minister of Sport, Multiculturalism, Seniors and Veterans, and the members of the Sri Lankan community and business leaders also participated.

During the keynote address, the Governor expressed that Sri Lanka and Australia have enjoyed a cordial relationship for many years, and wish to improve bilateral trade links between both countries in the near future.

Minister Damien Tudehope stated that Sri Lanka is a wonderful island with many valuable features, and that during his last visit to Sri Lanka, he had seen the nature, historical places, wildlife, fauna and flora of the country.  He specially mentioned that Sri Lanka is the best honeymoon destination for Australians.

Scott Farlow, representing the Acting Minister of Multiculturalism, made his remarks and explained his close relationship with the Sri Lankan community based in Sydney.  He also scheduled to visit Sri Lanka to further elevate bilateral relations.

Consul General M.H.M.N. Bandara in his welcome speech, stated that the Sri Lanka and Australia enjoy excellent bilateral relations. The cooperation will further extend due to World Cup cricket matches scheduled to be held in Australia, as well as SriLankan Airlines commercially operating from Sydney to Colombo in July.  And he also briefed about the bushfire relief activities conducted by the Sri Lankan community in Australia.

The cultural organisations based in Sydney performed the traditional dancing and singing for the event, and the Consulate General Office hosted a cocktail dinner for all the participants.