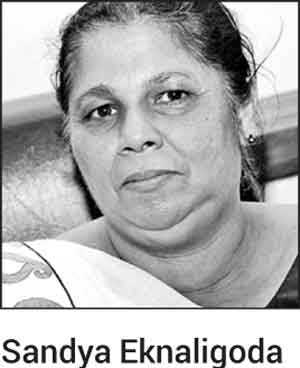 Sandya Eknaligoda, the wife of missing journalist Prageeth Eknaligoda, had written to Prime Minister Ranil Wickremesinghe requesting for security for herself and her children after the release of Bodu Bala Sena (BBS) General Secretary Ven. Galagoda Aththe Gnanasara.

The monk was jailed after he was found guilty of Contempt of Court following verbal abuse hurled at Eknaligoda during the court proceedings into her husband’s disappearance. She had earlier objected to the granting of a Presidential pardon for Gnanasara Thero.Eknaligoda, in the letter to the Prime Minister, recounted the circumstances that led to the arrest and conviction of Ven. Gnanasara and called for security to be provided for her and her children. She also recounted the harassment and threats she had endured at the hands of Ven. Gnanasara’s entourage and scores of lay supporters.

She also stated it was an injustice to herself as the aggrieved party, the Magistrate, and the other lawyers in the country, that the Thero was released with a Presidential pardon.