Home / News/ Sajith promises prosperity for all under his leadership

Sajith promises prosperity for all under his leadership 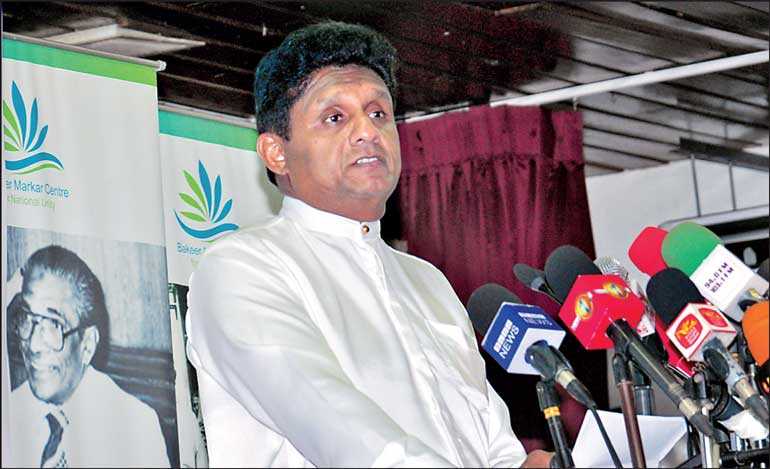 UNP presidential candidate hopeful Minister Sajith Premadasa yesterday promised a truly prosperous nation to all people, as opposed to enriching a select few as rulers to date have done in Sri Lanka. 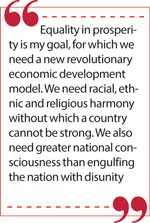 This, he warned, was “a serious problem”, and said that under his Presidency he will ensure all people and communities will be prosperous, as opposed to a select few.  “In the past, only a few benefited through so-called measures to achieve prosperity. Only a few people became powerful and strong, not the masses,” Premadasa told the audience at the Sri Lanka Foundation Institute, attended by politicians, diplomats, and civil society leaders.

“What do we mean by political, economic, military, or social power as a nation?” he queried, and stressed the real challenge was to ensure all communities feel economically, politically, and socially powerful, and not just a handful.

“Equality in prosperity is my goal, for which we need a new revolutionary economic development model. We need a creative vision,” added Premadasa, who quoted statistics to drive home the point of widespread inequality in the country. The UNP Deputy Leader also called for greater unity, which he emphasised as the biggest strength of a nation. “We need racial, ethnic, and religious harmony, without which a country cannot be strong,” he said, adding that some politicians were creating divisions within communities to come to power.  This, he said, was a big threat to national unity, and politicians with such sinister motives must be voted out.

To stress his remarks, Premadasa quoted Martin Luther King Jr.: “We must learn to live together as brothers or perish together as fools.”

Premadasa added, “A leader must serve the nation with a pure heart, which is key to create a united and prosperous country.”

“We also need greater national consciousness than engulfing the nation with disunity and pursuing selfish motives,” added the UNP Deputy Leader during his lecture.

He also pointed out that peace and stability, along with a new economic model, apart from stimulating equitable growth and prosperity, will attract more foreign investors and businesses.

Premadasa urged all communities to join in his vision to create a meaningful change, with greater unity and pride of place for humanity. He said that the late M.A. Bakeer Markar was a symbol and an inspiration for unity and humanity.