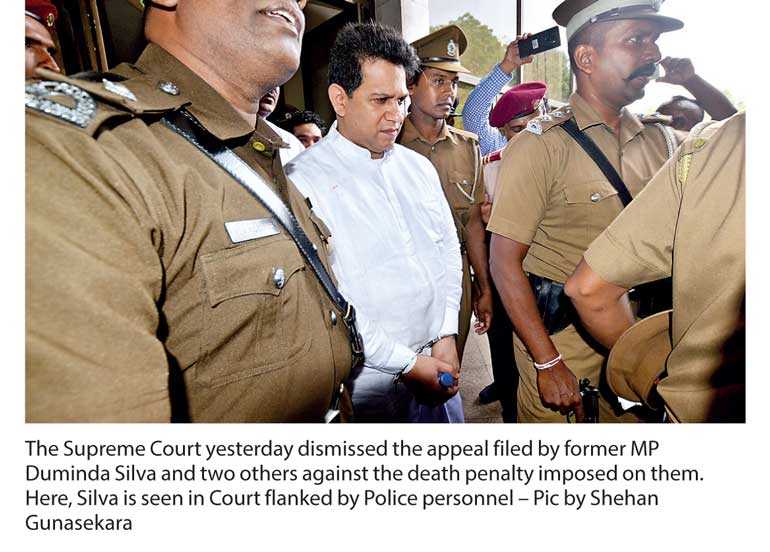 The Supreme Court yesterday dismissed the appeals filed by former MP Duminda Silva and two others against their death penalties over the murder of former Presidential Advisor Bharatha Lakshman Premachandra.

The five-judge bench headed by Chief Justice Priyasath Dep affirmed the conviction and punishment given by the High Court in September 2016 for the murder that took place during an election campaign in 2011.

Silva and four others were indicted over the killing of Premachandra. However, the court acquitted one of the accused, the police officer assigned to Silva’s security, Anura Thushara de Mel, while confirming the sentence on the other convicts and also ordering that death penalty on Silva be carried out.

Five persons including Premachandra were killed in a shooting incident, which took place in Mulleriyawa on 8 October 2011 on the day of the Provincial Council elections, while Silva had sustained injuries.

Silva and four others were found guilty and sentenced to death by the Colombo High Court by a majority decision on 8 September 2016. Four of them including former MP Duminda Silva, Chaminda Ravi Jayanath alias ‘Dematagoda Chaminda’, Sarath Bandara and Anura Thushara de Mel had filed appeals before the Supreme Court challenging their sentences.