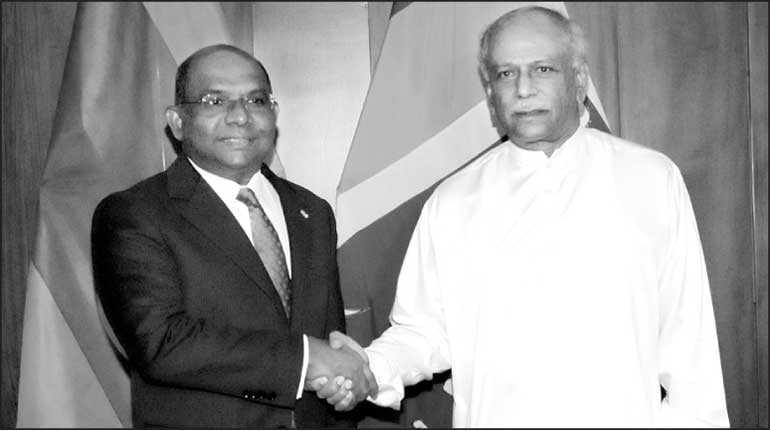 Maldivian Foreign Minister Abdulla Shahid conveyed on Thursday to Foreign Minister Dinesh Gunawardena his country’s appreciation for Sri Lanka’s longstanding partnership in socio-economic development with the Maldives, adding that this cooperation is reflective of the deep-rooted friendship which reinforces the mutual trust, respect and goodwill that exist between the two countries.

The Foreign Minister of Maldives is currently on a three-day official visit to Sri Lanka, during which he called on President Gotabaya Rajapaksa and Prime Minister Mahinda Rajapaksa earlier on Thursday.

During the discussion, Minister Gunawardena reiterated the importance of continued cooperation between the two countries at bilateral, regional and international fora, while his Maldivian counterpart welcomed such joint endeavours in addition to Sri Lanka’s solidarity and strong support for the readmission of Maldives to the Commonwealth.

The two Ministers also agreed to reach early conclusion of the outstanding bilateral instruments between the two countries in the cultural, economic, trade, investment and security spheres.

The two Ministers agreed to convene the Sri Lanka-Maldives Joint Commission in the first quarter of 2020. The Joint Commission covers the areas of Economic cooperation and Trade, Fisheries, Education, Health, Employment, Tourism and Cultural Cooperation between the two countries.

The visiting Minister extended an invitation to Minister Gunawardena to undertake a visit to Maldives, which was accepted.

The Foreign Minister of Maldives was accompanied by Ambassador Omar Abdul Razzak and Deputy Head of Mission Khadeeja Najeeha while Foreign Secretary Ravinatha Aryasinha and senior officials of the Ministry were associated with Foreign Minister Dinesh Gunawardena at the discussions.