By Ashwin Hemmathagama, Our Parliament Correspondent

Calling for public action to defeat the constitutional standoff that has dragged on for over five weeks, tarnishing the image of Sri Lanka before the world and incurring heavy losses to the economy, the Janatha Vimukthi Peramuna (JVP) lawmakers yesterday moved a motion in Parliament, calling for its key actors to be held responsible. 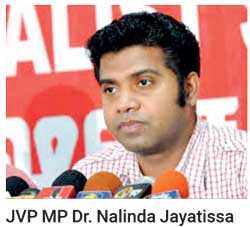 Taking the lawmakers back to the first coup in the country, MP Jayatissa said: “In 237BC, we had a similar coup for the first time in our history. Two horse traders from South India – Sena and Guththika – did this coup. Now history is repeating itself. Today, Sirisena took the part of Sena and Mahinda became the Guththika in this coup. We should not allow those who are involved in the coup to get away with it. We expect UNPers to come out in Parliament with strong criticism about President Sirisena’s act.”

Mentioning a well-known folktale from Panchathantra, written by Wishnusharman of India, MP Jayatissa drew parallels between President Maithripala Sirisena and an animal in the story that misled his fellow animals in the forest, having fallen into a paint bucket.

“In the Panchathanthra, there is a story about a fox who mislead the animals of the forest, having fallen into a bucketof blue paint. After years of his rule, having heard a group of foxes howling in the wild, the blue-painted fox could not resist joining them with a howl. That exposed the animal despite being blue is an ordinary fox and not a special animal sent to rule the other animals in the forest. Similarly, what we saw in January 2015 is a fox that fell into the paint bucket of good governance. It took us little over four and half years to identify this particular fox. We should defeat this coup, and people are standing against this,” he said.

According to MP Jayatissa, during the last five weeks, Sri Lanka has fallen into a bottomless pit that destroyed the economy and the diplomatic recognition the country had. Seeking House intervention to return the country to the point where it was before the coup, it was proposed that the motion passed on 14 November be reconfirmed by the Court of Appeal on 3 December.

“This crisis could have been stopped and solved if the President had acted upon the provisions in the Constitution immediately after the noconfidence motion was passed in the Parliament. Sri Lanka is now discredited in front of the world for having a President who violated the Constitution. We were a country that gave examples on democracy. There is a serious drop in the tourism sector with the cancellation of bookings. It was reported that earnings of SriLankan Airlines dipped. The background to this issue is the coup,” added Dr. Jayatissa.