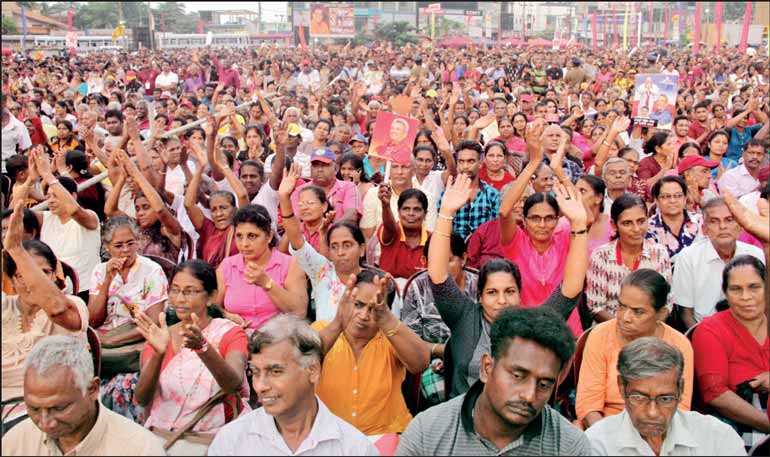 Billing himself as the most competent contender, Sri Lanka Podujana Peramuna (SLPP) presidential candidate Gotabaya Rajapaksa yesterday insisted he alone has the capacity to wipe out corruption, secure national security, and turn around the economy.

Speaking at the final rally at Homagama, SLPP presidential aspirant Gotabaya Rajapaksa thanked the audience for braving the weather and coming out to show their support.

“Even before I was presidential candidate, this Government harassed me. Even now, they have not stopped. They tried to throw me in jail. There could be attempts to discredit me over the next few days. These are instigated by people who do not respect your intelligence. But I know where your heart lies and I know you will vote for me on Saturday,” he told the packed rally.

Rajapaksa invited all citizens to join in the challenge of rebuilding the country. Recalling his manifesto, he stressed that the priority of his presidency, if he is elected, would be to protect national security. “We ended the war and ensured that there would be no return of terror, but this Government rolled that back, supported by various organisations that did not have the best interests of our nation at heart. Priority was not given to national security. They signed agreements to discredit our war heroes, they started making unfounded accusations against our top military officials. The CID and TID and Police were instrumental in destroying terrorism, but under this Government they were used to discredit political rivals and sent to jail. That is why when they apprised the Government on the dangers to national security, they were told that they were creating war-like sentiments and told to keep quiet. But we will reinforce national security and ensure that you are all protected. I will personally take on the responsibility of protecting your children.”

Rajapaksa also stressed that he would ensure clean governance. According to the presidential hopeful, plans already published to turn around the economy will be implemented speedily. Agriculture, fisheries, and other industries are suffering, because the Government did not pay any attention to their issues, he claimed. He also contended that the tea industry is facing major issues, from the plantation worker to the largest company, and these problems will be given solutions by him. Tea prices needed to be resorted, he argued, and pledged to work on these problems. Local businesses will be protected, and taxes will be simplified, with VAT being reduced to just 8% from the current 15%, he reiterated.

“Tourism is also struggling, this is largely because there is little security. Today, there is a growing middle class in India and China, these are the people who are travelling the most. Sri Lanka needs to have more promotional activities, we have to increase immigration and emigration facilities so it is easier for people to travel to Sri Lanka. We will aim to increase arrivals to 7 million per annum. Technology is driving economies in East Asian countries. We will use technology to create new jobs and provide employment that meets the aspirations of youth. The IT industry can provide high salaries, but for that we also have to improve the education system. We will take steps to reform the education sector.”  “From next year, all students who pass the Advanced Level exam will have access to a university education. There are investors willing to bring in about $1 billion, but for that we have to create an IT workforce of about 300,000 people. I pledge to complete everything in my manifesto during my term as president. We are people who have taken up challenges and delivered. Please carry out your duty and I will ensure that I do my duty,” he told cheering supporters.

SLPP leader Mahinda Rajapaksa, speaking at the rally, delivered a short speech in support of his brother and stressed that this was an effort not just to elect a new president but also to form a new Government.

“First thing you must do on Saturday morning is go and mark your vote for Gotabaya Rajapaksa. That is the first salvo to forming a new Government. The next salvo will be fired at the General Elections. That is for sure. Once Gotabaya Rajapaksa is elected as President, he will decide when the General Election will be held. He will take that decision after discussing with all parties. We are definitely going to establish a Government. Your hopes lies with Pohottuwa, nowhere else.”

Rajapaksa blamed the present Government for faulty governance and selling national assets. “This Government barely took any time before it started its corruption. It started by robbing the Central Bank and then proceeded to sell the infrastructure that we built. Now the Hambantota port belongs to another country. So are we going to continue selling this country to outsiders? They are planning to establish an economic corridor and take that under themselves. No Government that comes for just four or five years can sell this motherland. The only way to save the country and protect it for the next generation is to vote for the Pohottuwa.”