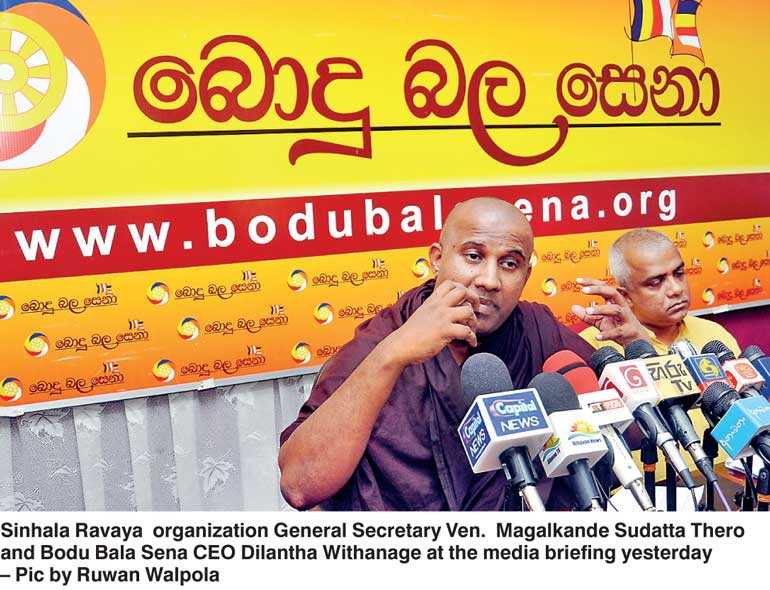 “Ven. Gnanasara Thero’s words were that the eunuch governmental officials are responsible for what had happened. But the Thero was charged for directly addressing Attorney Dileepa Peiris, calling him an eunuch and ordering him to be seated. Ven. Gnanasara Thero didn’t misbehave as was portrayed in the media. He asked for forgiveness from open court then and there when he uttered these words. We also do not understand how the sentencing was given without the Thero being present in court since this falls under a criminal offence,” said BBS CEO Dilanthe Withanage.

Earlier this week, BBS General Secretary Gnanasara Thero was found guilty of contempt of court on four charges filed by the Attorney General’s Department and was sentenced to jail for six years concurrently over his behaviour during a court hearing on the abduction of journalist Prageeth Eknaligoda.

The BBS CEO, along with the Sinhala Ravaya General Secretary Magalkande Sudaththa Thero, called for all of the Sangha to join them in drafting a letter to the President requesting a presidential pardon and hoped the press conference would reach the President in time.

“We are hoping that the Sangha will come together with us and draft a letter requesting a pardon from the President. In the meantime we hope that the President will hear our plea through the media. We are trusting that our Ven. Gnanasara Thero will be given the pardon because he is a national treasure and we will not lose hope,” added Magalkande Sudaththa Thero.

Withanage also called for CCTV cameras to be installed in the courts, claiming the facility could have helped the Thero in his case. He also stated that the public needed to be made aware of the law on contempt of court. He went on to state that the authoritarian nature of the legal system should be controlled under Good Governance and not be given extreme power.

“We as Buddhists need to be made aware of the Thero’s ruling about what happened at the court hearings and about his health condition,” Withanage added.

“Minister Rishad Bathiudeen was freed on bail after an alleged threat against a judge. Gnanasara Thero was supposed to be given six months in jail and that is the punishment given by a Magistrate Court over contempt of court but the sentencing was extended after making an appeal in the Appeal Courts. ”

The Sinhala Ravaya General Secretary Sudaththa Thero further elaborated on the statement given for Gnanasara Thero and added that he was still seeking medical treatment at the Sri Jayawardenapura General Hospital and that he might need to undergo surgery.

“The Ven. Thero spoke with the permission of the courts. He was still sentenced to 19 years’ jail time, and then the court directed the sentence to run concurrently for six years with Rigorous Imprisonment. The Ven. Gnanasara Thero’s health condition is deteriorating and he is to undergo surgery and will further need to remain at the hospital as per the doctor’s orders,” Sudaththa Thero added.

The BBS CEO, along with the Sinhala Ravaya General Secretary Sudaththa Thero, called for all monks to join them in drafting a letter to the President to request a presidential pardon and hoped the press conference would reach the President in time.