The MOU was signed on behalf of TMC by Immediate Past Chairperson Dr. Anver Dole and TMC – Kalutara Chairperson Errol Smith and on behalf of the Hibiscus Beach Hotel, Kalutara, by Director Lakshmi Fernando and Group General Manager Dulip de Alwis and the MOU was exchanged between Errol Smith from TMC and Dulip de Alwis from Hibiscus at their group head office in Colombo

The renewal of the MOU between TMC and Hibiscus Beach Hotel, Mahawaskaduwa, Kalutara was signed recently for a period of two years, to operate as the TMC – Kalutara Host Hotel

The Annual General Meeting of the Management Club – Kalutara was held on 22 August, at the Ramadia Ranmal Holiday Resort, Moratuwa the second host hotel of TMC – Kalutara.

TMC – Kalutara was inaugurated at the Hibiscus Beach Hotel, Kalutara, (the Host Hotel of TMC – Kalutara, on 8 June, 2009 and this AGM coincides with the 10th anniversary of the Club.

On this occasion the renewal of the Memorandum of Understanding (MOU) with Ramadia Ranmal Holiday Resort, to operate as a TMC Host Hotel, was also signed and exchanged. 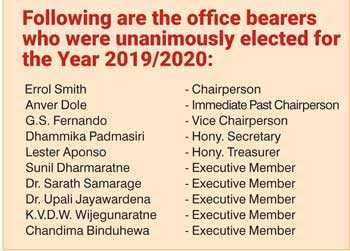 Speaking on the occasion, the newly-elected Chairperson, Errol Smith, thanked the outgoing Chairperson and his Executive Committee and pledged his fullest commitment to make TMC – Kalutara a vibrant Club. He also requested the energetic Vice Chairperson, G.S. Fernando to initiate a membership drive to bring in new members to the TMC – Kalutara. The Membership Drive was planned to be held in December, 2019 at the Hibiscus Beach Hotel in Kalutara. Professionals/managers/entrepreneurs, are invited to join ‘The Management Club’ and enjoy its numerous facilities, benefits and advantages.

An orientation for prospective members of TMC will be held in December, 2019 and if anyone is interested to know more about The Management Club, contact Errol Smith – Chairperson, TMC – Kalutara. E-mail: esmithsjak@sltnet.lk, Tel: 0773 785780.