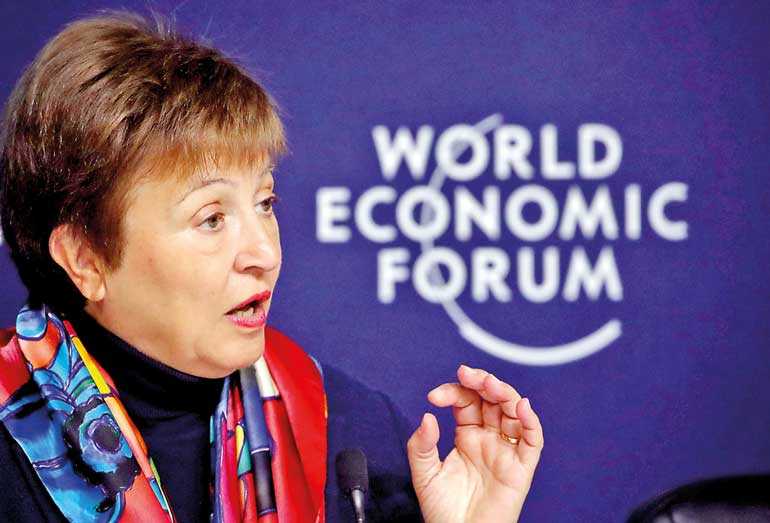 Washington (Reuters): Global growth appears to have bottomed out but there is no rebound in sight and risks ranging from trade tensions to climate shocks makes the outlook uncertain, a top International Monetary Fund official said on Monday.

For 2020 and 2021, the IMF trimmed back its global growth forecasts, mostly due to a sharper-than-expected slowdown in India and other emerging markets, even as it said that a US-China trade deal added to hopes the activity was bottoming out.

With trade wars weighing on exports and investment, the global economy expanded by 2.9% last year, its slowest pace since the global financial crisis, despite near synchronised central bank easing that added half a percentage point to global growth.

“We have not reached a turning point yet,” IMF Managing Director Kristalina Georgieva told a news conference on the eve of the annual meeting of the World Economic Forum (WEF) in the Swiss ski resort of Davos. “The reality is that global growth remains sluggish.

“Just in the very first weeks of the New Year we have witnessed increased geopolitical tensions in the Middle East and we have seen the dramatic impact that climate shocks could have. We saw them in Australia as well as parts of Africa.” The IMF now sees growth at 3.3% this year, below its October projections for 3.4% and also cut the 2021 forecast to 3.4% from 3.6%.

The reductions reflect the IMF’s reassessment of economic prospects for a number of major emerging markets, notably India, where domestic demand has slowed more sharply than expected amid a contraction of credit and stress in the non-bank sector.

The IMF also said it marked down growth forecasts for Chile due to social unrest and for Mexico, due to a continued weakness in investment.

The Fund said that an easing of tensions between the United States and China, which had stunted GDP growth in 2019, had boosted market sentiment, amid “tentative” signs that trade and manufacturing were bottoming out.

Boost for China, not US

The Fund’s cautious outlook assumes that there are no additional flare-ups in US-China trade tensions but Georgieva warned that the root cause of the problem is not yet fixed.

“The underlying causes of trade tensions and the fundamental issues of reform of the trade system are still with us.” The IMF upgraded China’s 2020 growth forecast by 0.2 percentage points to 6.0% because the US trade deal included a partial tariff reduction and cancelled tariffs on Chinese consumer goods that had been scheduled for December. These tariffs had been built into the IMF’s previous forecasts.

But the Fund did not give a boost to its US growth forecast for China’s pledges to increase purchases of US goods and services by $200 billion over two years. Instead, the IMF said 2020 US growth would be 0.1 percentage point lower than forecast in October, at 2.0% because of the fading stimulus effects from 2017 tax cuts and the Federal Reserve’s monetary easing.

Eurozone growth also was marked down 0.1 percentage point from October, to 1.3% for 2020, largely due to a manufacturing contraction in Germany and decelerating domestic demand in Spain.

India saw a sharp, 1.2 percentage point cut to its 2020 growth forecast to 5.8%, the IMF’s biggest markdown for any emerging market, because of the domestic credit crunch. Monetary and fiscal stimulus is expected to lift India’s growth rate back to 6.5% in 2021, although this is still 0.9 percentage point lower than forecast in October.

Other emerging markets saw forecast downgrades, the IMF said, including Chile, which has been hit by social unrest. Mexico will grow just 1.0% in 2020, down from 1.3% forecast in October.