Home / Management/ Member’s Speak: ‘The Fourth Industrial Revolution and the Future of Business and Work’

Member’s Speak: ‘The Fourth Industrial Revolution and the Future of Business and Work’

Addressing members and guests at TMC’s Member’s Speak which was held at the Galadari Hotel on 18 July, TMC member Dhushy Thillaivasan spoke on ‘The Fourth Industrial Revolution and The Future of Business and Work’.

It was yet another gathering of members of the TMC, guests and sponsors taking the opportunity of listening to Dhushy Thillaivasan. Thillaivasan elaborated to the audience the 1st, 2nd Industrial Revolutions, the impact of it, the 3rd and 4th and the Digital Revolution, and the Implication for Business as follows: 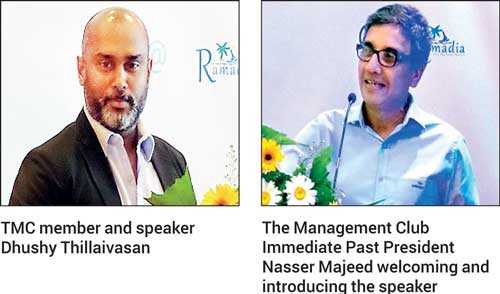 Following a slow period of proto-industrialisation, the 1st Industrial Revolution begins towards the end of the 18th century and continues into the early 19th century he said and thereafter we began the process of mechanisation which replaced agriculture with industry as the foundation of the economic structure of the society. The invention of the steam engine created a new type of energy which helped us to move away from the limitation of muscle power and lay the foundations for the modern-day factories and cities.

He stated that at the end of the 19th century, we stepped into the 2nd Industrial Revolution with the discovery of new energy sources such as the electricity, gas and oil with technological advancements. The invention of the internal combustion engines gave us more power and manoeuvrability. During this period, he said we mastered the use of steel and chemical synthesis and created synthetic fibre, dyes and fertilisers. Methods of communication were revolutionised with the invention of the telegraph and telephone. He said this was possible by centralising research and capital structured around an economic and industrial model based on new ‘large factories’ and the organisational models of production.

Taking into consideration the impact of the 1st and 2nd Industrial Revolution he said that during this period the world saw the shift form cottage industry to large factories creating the factory system which is marked by concepts such as division of labour. The rise of capitalism and urbanisation replaced the traditional land owner as the leaders of the nation’s economy and power structure and saw the emergence of the middle class, materialism and consumerism. This period saw women’s entry into the workforce. The governments focused on creating a skilled workforce giving rise to the professional class. He said the exploitation of labour gave rise to socialism and Marxism.

He expressed that thereafter we ushered in the 3rd Industrial Revolution towards the 20th century when we started using nuclear energy, emergence of miniaturised material which would open doors, most notably to space research and biotechnology. For industry, this revolution gave rise to the era of high-level automation in production.

Thereafter we moved from analogue electronic system to technology, digital electronic systems which gave birth to the information and electronic recordkeeping. Internet for commercial use, the sophistication and advancement of computer software technology enabled business and industries to venture and compete globally. Today, technology is very complex, its centrality to business is extremely critical so much so that business decisions are technology decision and technology decisions are business decision.  Explaining that the first three industrial revolutions brought to the world water, steam power, electricity and digitisation he said with every industrial revolution comes refining shifts to social, economic, environmental and political systems that truly alter the course of humanity. Some of these shifts are foreseen, and others are completely unforeseen he said.

Explaining to the members the fourth industrial revolution Thillaivasan said that it is characterised by merging technology that blurs the lines between the physical, digital and biological spheres creating cyber-physical systems. The extent and depth of these changes are a sign of transformations to entire production, management and governance systems causing disruption to the global economy and will fundamentally change industries. Technologies like artificial intelligence (AI), nanotechnology, quantum computing, synthetic biology and robotics will drastically supersede any digital progress made in the past 60 years and create realities that we previously thought to be unthinkable. Cyber-physical systems are bringing an even bigger magnitude of change to products and this change is happening much faster than ever before. He said that the growing transparency, consumer engagement, new patterns of consumer behaviour, increasingly built upon access to mobile networks and data, will force companies to adapt the way they design, market, and deliver products and services.

Finally, he expressed that the shape and form of the future organisation change will be forced to collaborate with multiple entities to stay alive. This will also have major implications on how organisations will understand and manage their knowledge, talent and culture.