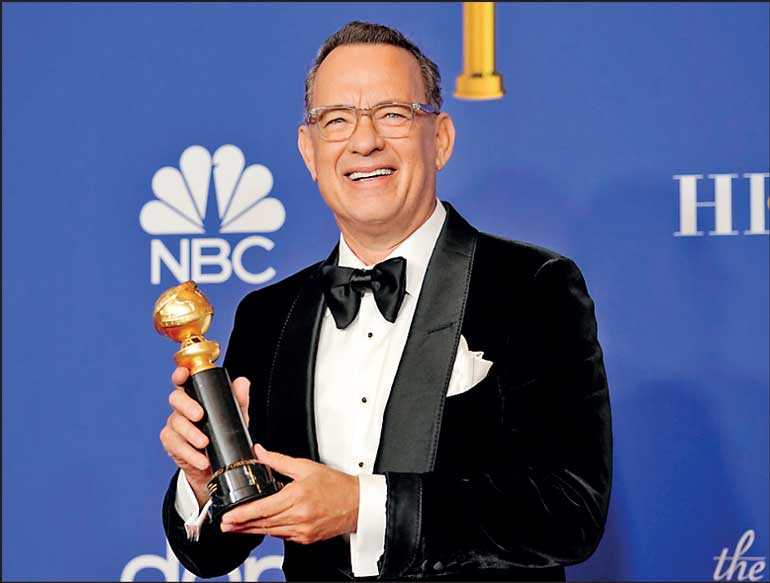 BEVERLY HILLS, Calif. (Reuters): Tom Hanks, regarded as one of the nicest men in show business, was honoured with a lifetime achievement award at the Golden Globes on Sunday to mark his 30-year movie career.

The boyish-looking Hanks, now 63, was presented with the Cecil B. DeMille award at a ceremony where he also was nominated in the best supporting actor race for his role as the late, beloved US children’s television presenter Mister Rogers in “A Beautiful Day in the Neighborhood.”

Hanks began his acceptance speech by joking about his early career stint on the 1970s TV comedy “The Love Boat” and saying that he had a bad cold that had made him particularly emotional.

He thanked his wife, Rita Wilson, and five children before acknowledging a long list of actors and directors who he said had contributed to his long success.

“You’re a dope if you don’t steal from everybody you have every worked with,” Hanks said, naming Meryl Streep, Meg Ryan, Denzel Washington, and Charlize Theron, among others.

Hanks made his movie breakthrough in “Big” in 1988, playing a teenager who wakes up to find himself in the body of an adult.

He went on to win back-to-back Oscars and Golden Globes in 1994 and 1995 for his roles in AIDS drama “Philadelphia” and comedy “Forrest Gump.”

Genial and dependable, he has become known as “America’s Dad” thanks to performances in more than 70 movies, including romantic comedy “Sleepless in Seattle,” war movie “Saving Private Ryan,” action film “Sully” and the voice of friendly cowboy Woody in the “Toy Story” animated franchise.

Hanks attributed some of his success in the movies to a lesson he learned while working at a Shakespeare theater festival when he was a young actor: being on time.

“Showing up on time is one of the greatest liberating acts you can give yourself in a movie,” he said.

The Cecil B. DeMille award is given annually by Golden Globe organisers the Hollywood Foreign Press Association to an actor, director or producer who has made a lasting impact on the film industry. Past recipients include Steven Spielberg, Meryl Streep, Oprah Winfrey, Jeff Bridges and Harrison Ford.