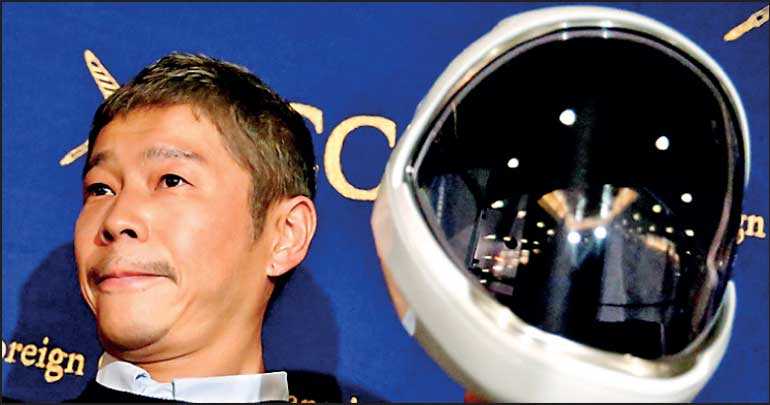 FILE PHOTO: Japanese billionaire Yusaku Maezawa, founder and chief executive of online fashion retailer Zozo, who has been chosen as the first private passenger by SpaceX, poses for photos as he attends a news conference at the Foreign Correspondents' Club of Japan in Tokyo, Japan - Reuters

TOKYO (Reuters): Japanese fashion tycoon Yusaku Maezawa is giving away $9 million to his Twitter followers in what he says is a “social experiment” to see if the payment boosts their happiness.

Maezawa will give 1 million yen ($9,000) to 1,000 followers selected at random from those who retweeted a 1 January post, with the impact of the money to be tracked through regular surveys.

“It’s a serious social experiment,” said Maezawa on YouTube, adding he hopes to attract interest from academics and economists.

Maezawa, who is to be the first private passenger to fly around the moon with Elon Musk’s SpaceX, is known for his high spending on art and sports cars but also has a predilection for musing on ideas like a world without money.

He tied the giveaway to the idea of basic income, or the theory of providing a periodic no-strings-attached payment to all citizens that has gained traction in some political circles and is backed by Democratic US presidential candidate Andrew Yang. “Basic means a regular minimum amount offering a sense of security, what Maezawa is offering is totally different,” said Dai-ichi Life Research Institute senior economist Toshihiro Nagahama.

Maezawa said that given that he “has the money and free time” to make the payments, he felt the need to try and inspire greater debate over the merits of the theory in Japan.

The idea of a universal basic income has gained support over fears technology such as artificial intelligence will wipe out large numbers of jobs but that concern is for now less pronounced in Japan with its tight labour market, said Nagahama. It’s the second, larger, giveaway by the entrepreneur, who in November secured a $900 million payday through the sale of his online fashion business Zozo Inc. to SoftBank Group Corp.

Maezawa, who recently grabbed headlines after his split from actress girlfriend Ayame Goriki, has gathered almost seven million followers on Twitter with his mix of displays of conspicuous consumption and folksy pronouncements on the meaning of life. YouTube is the latest online outlet for the businessman, with videos including a tour of his private jet, a visit to the barber to dye his hair and updating his bank book after November’s windfall.

The debate over basic income comes as income inequality continues to grow in the United States, where in recent years some of its wealthiest entrepreneurs, from Microsoft co-founder Bill Gates to investor Warren Buffet, have pledged to give away most of their wealth.