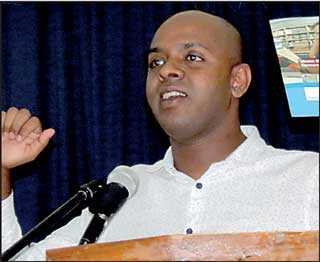 educational experiments. Teutolab, which was founded by the Bielefeld University in 2000, has so far reached out to more than 200,000 students all over the globe by conducting science workshops.

The two representatives from University of Bielefeld Deputy Manager of Teutolab Chemistry Henning Schuler, and Teutolab Chemistry Pedagogic Head Heidi Starke already conducted workshops in schools in Sri Lanka in 2017. This year they visited the Universities of Peradeniya, Eastern and Colombo respectively to conduct high level experiments with science students.

The program started with the screening of an educational movie on the negative effects of plastics and how to reduce the usage of plastics. Afterwards, they moved to the laboratory for the second part of the program which were experiments focused on the theme ‘Plastics: Blessing or a curse?’

This project, part of the National Science Film Festival, could be considered an awareness session on the harmful nature of plastics but also about promoting recycling, which is a timely topic as it is widely discussed and debated more and more all over the world.

The organisers of the project, the German Embassy, along with the Teutolab scientists, were highly impressed with the level of enthusiasm and interest displayed by the students as well as the lecturers. Both parties were actively involved in the practical component of it and were extremely thankful for the opportunity to be exposed to a novel and beneficial concept as a mobile laboratory.

The students shared the opinion that this was a hands-on experience, and something that they couldn’t have attained by simply learning or reading about plastic. “The experiment we conducted today under your guidance and instructions gave us new knowledge about the possible methods of recycling plastic to overcome the environmental pollution caused by use of plastic.

“Especially the formation of alternatives to plastic using silkworm is a really interesting research area which I was unaware of before,” stated one of the students from University of Peradeniya after participating in the workshops.

In line with this scientific outreach program, DAAD Sri Lanka (the German Academic Exchange Service) Information and Office Manager Nadeesha Palliyaguru conducted an information session on higher studies in Germany at the University of Peradeniya which saw the participation of around 80 students from the Faculty of Science. Additional outreach sessions in the Eastern University and Colombo will follow.

The Embassy extends its heartfelt gratitude to the Heads of the Departments of all three Universities involved and the students for their assistance in making the event a huge success as well an enjoyable and educational experience.