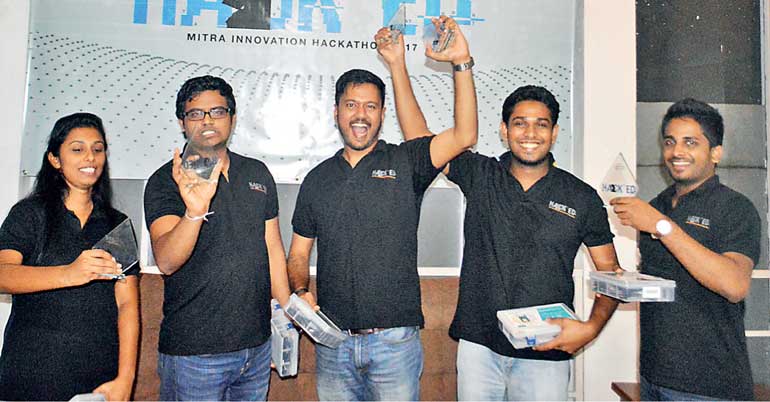 On Saturday 7 October, Mitra Innovation –a Sri Lankan and UK based software engineeringcompany – held its first-ever internal Hackathon, called Hack’ed, and Team Alfred powered its way through to first place. Competing against seven other expert engineering teams, Alfred grabbed first place in the 10-hour hacking marathon with a well thought out, brilliantly put together piece of software engineering called ‘Alfred for JIRA’.

‘Alfred for JIRA’ is an insights and analytics app for senior level project managers who find it time-consuming and tiring to keep tabs on the progress of multiple ongoing projects. The app produces visualised and descriptive statistics on all the projects within an organisation.

Team Alfred delivered the app within the short 10-hourHackathon period using a mix of technologies such as: Apollo, React, Victory, GraphQL, Node.JS, PostgreSQL, NGINX and Let’s Encrypt. The winning team also demonstrated their expertise in Amazon Web Services (AWS) products such as AWS Glue, Route 53, EC2 and Lambda to power the winning app.

Demonstrating the app to an expert panel of judges – comprising Hasitha Yaggahavita from CTO 99X, Venura Mendis from CEO WSO2 Telco, and Dr. Ashok Suppiah, co-founder and CEO of Mitra Innovation – Alfred for JIRA easily impressed its audience with its ease-of-use features, and intuitive design, backed by powerful technologies. All teams taking part in the Hackathon were provided with AWS accounts to deploy and run their apps.

Mitra InnovationCTO and Chief Architect SudarakaJayashankasaid: “The first ever Mitra Innovation Hackathon was a great success on Saturday. It was impressive to see eight of our internal software engineering teams coming up with amazing ideas, working brilliantly as teams, and utilising their expert developer knowledge to imagine, design and develop so many good apps. Congratulations to Team Alfred on winning the competition!”

Mitra Innovation CEO Ashok Suppiahsaid: “Well done to the other competing teams who also took part. We saw an amazing display of skill and effort from everyone, with apps being built to solve parking problems, to ensuring gaming compliancies, to project estimation applications, to collaborative and resource sharing applications. As a company that is passionate about helping smart entrepreneurs, enterprises and publicservice organisations to accelerate their own innovative ideas into amazing global businesses, solutions and apps, the teams were extremely inspiring.”