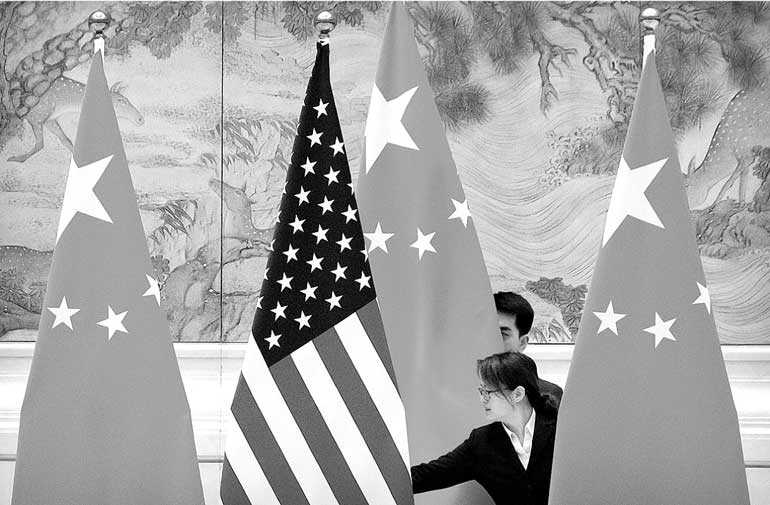 Chinese staffers adjust US and Chinese flags before the opening session of trade negotiations between US and Chinese trade representatives at the Diaoyutai State Guesthouse in Beijing, Thursday, 14 February – Reuters

Washington/Beijing (Reuters): China and the United States on Thursday agreed to hold high-level talks in early October in Washington, cheering investors hoping for a trade war thaw as new US tariffs on Chinese consumer goods chip away at global growth.

The new talks were arranged during a phone call between Chinese Vice Premier Liu He, US Trade Representative Robert Lighthizer and Treasury Secretary Steven Mnuchin, China’s commerce ministry said in a statement.

They would be the first in-person, high-level discussions since a failed US-China trade meeting at the end of July prompted US President Donald Trump to proceed with fresh tariffs on virtually all remaining Chinese imports so far untouched by the trade war.

But there was no indication that the first round of these tariffs — a 15% duty on Chinese consumer goods imposed on Sept. 1 — would be rescinded or halt a planned 1 October tariff increase on $250 billion worth of goods already levied at 25%.

The US Trade Representative’s office did not specify timing for the ministerial-level talks, saying only that these would take place “in the coming weeks.”

“In advance of these discussions, deputy-level meetings will take place in mid-September to lay the groundwork for meaningful progress,” USTR spokesman Jeff Emerson said in a statement.

Hu Xijin, Editor of China’s state-run Global Times newspaper, struck an upbeat tone on Twitter, saying, “Personally I think the US, worn out by the trade war, may no longer hope for crushing China’s will. There’s more possibility of a breakthrough between the two sides.”

But William Reinsch, a former senior US Commerce Department official, said the trade talks could drag well into 2020 since the two sides are still far apart on key issues, such as Washington’s demand that Beijing codify its reforms into law.

“The president has to choose between accepting a weak agreement or continuing the war,” said Reinsch, now at the Center for Strategic and International Studies.

“The trick is to make an agreement in September or October 2020, shortly before the presidential election, and it’ll look like he’s a hero,” Reinsch said. “If he does that too soon, it has time to fall apart before the election. The Chinese aren’t going to comply with it anyway,” Reinsch added.

Since a breakdown in the talks in May, Washington and Beijing have failed to narrow their deep differences over US demands for sweeping changes to China’s practices on intellectual property protections, transfers of US technology to Chinese companies, curbs to industrial subsidies and increased access to China’s markets.

Aiding the rally was positive US economic data, including an estimate of private sector payrolls growth and an acceleration of US services sector activity.

On Sunday, Washington began imposing 15% tariffs on an array of Chinese imports, mostly consumer products, while China began placing duties on US crude oil. On Monday, China said it had lodged a complaint against the United States at the World Trade Organization.

Washington plans to increase the tariff rate to 30% from 25% on $250 billion worth of Chinese imports from 1 October. The National Retail Federation said it was encouraged by confirmation of in-person trade talks, and urged Washington to end the trade war and work for a rollback of all tariffs. “This trade war has gone on far too long, and the harmful consequences for American business and consumers continues to grow,” said the group, which bills itself as the world’s largest retail trade association.