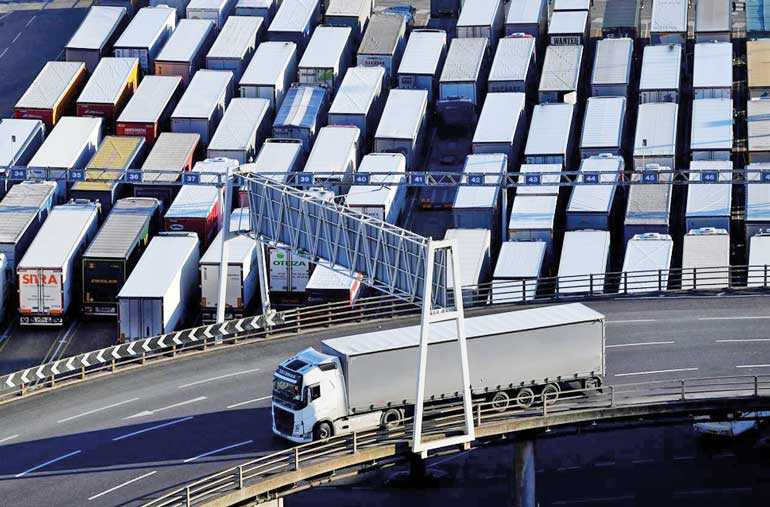 A lorry is driven past dozens of others parked after travelling by ferry between Britain and France at the Port of Dover, Britain - Reuters

LONDON (Reuters): Britain will face shortages of fuel, food and medicine if it leaves the European Union without a transition deal, according to leaked official documents reported by the Sunday Times, but whose interpretation was contested by Ministers.

Setting out a vision of jammed ports, public protests and widespread disruption, the Times said the forecasts compiled by the Cabinet Office set out the most likely aftershocks of a no-deal Brexit rather than the worst case scenarios.

But Michael Gove, the Minister in charge of coordinating no-deal preparations, challenged that, saying that the documents did set out a worst case scenario and that planning had been accelerated in the last three weeks.

The Times said up to 85% of lorries using the main channel crossings “may not be ready” for French customs, meaning disruption at ports would potentially last up to three months before the flow of traffic improves.

The Government also believes a hard border between the British province of Northern Ireland and the Republic of Ireland, an EU member, will be likely as current plans to avoid widespread checks will prove unsustainable, the Times said.

“Compiled this month by the Cabinet Office under the codename Operation Yellowhammer, the dossier offers a rare glimpse into the covert planning being carried out by the Government to avert a catastrophic collapse in the nation’s infrastructure,” the Times reported.

Responding to one of the authors of the Sunday Times article on Twitter, Gove said: “Yellowhammer is a worst-case scenario - v significant steps have been taken in the last 3 weeks to accelerate Brexit planning.” Prime Minister Boris Johnson’s office said it did not comment on leaked documents.

A Government source blamed the leak on an unnamed former Minister who wanted to influence negotiations with the EU.

“This document is from when Ministers were blocking what needed to be done to get ready to leave and the funds were not available. It has been deliberately leaked by a former Minister in an attempt to influence discussions with EU leaders,” said the source, who declined to be named.

Earlier, asked about the Yellowhammer documents, Energy Minister Kwasi Kwarteng told Sky News there was “a lot of scaremongering around” and that Britain would be fully prepared for a 31 October no-deal exit.