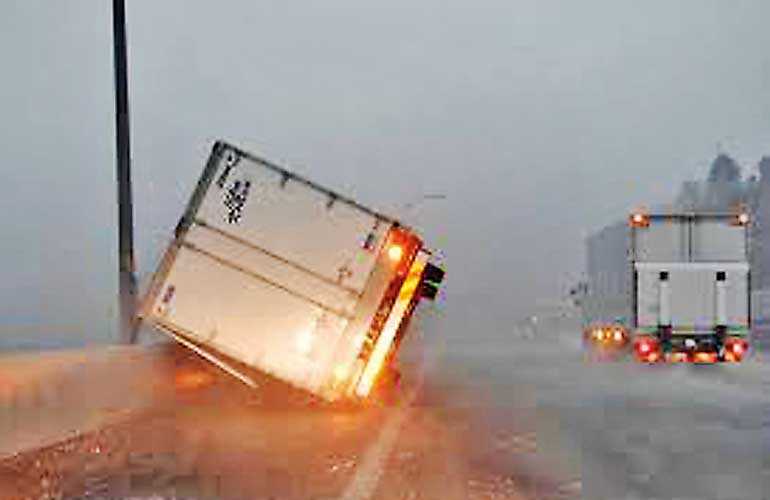 A truck turned over by high winds lies on a highway in Narita, Chiba prefecture on September 9, 2019. A powerful typhoon with potentially record winds and rain battered the Tokyo region on September 9, sparking evacuation warnings to tens of thousands, widespread blackouts and transport disruption -  AFP

TOKYO (Reuters): One of the strongest typhoons to hit eastern Japan in recent years struck just east of the capital Tokyo on Monday, killing one woman, with record-breaking winds and stinging rain damaging buildings and disrupting transport.

More than 160 flights were cancelled and scores of train lines closed for hours, snarling the morning commute for millions in a greater Tokyo area with a population of some 36 million.

Direct train service between Narita airport and the capital remained severely limited into the evening, with thousands of irritated travellers packed into a key transport hub for both the Rugby World Cup starting later this month and next year’s Tokyo Olympics.

“They simply had no contingency plan...,” one weary traveler who lives in Tokyo said of the scene, in which people crowded the exit areas and food ran out in airport stores.

“They let planes land ... and thousands of passengers were disgorged into an airport that was cut off - no buses, no JR trains. The only connection was a private train running every half hour half way to Tokyo.” The man, who said he arrived just before 4 p.m. local time and only caught a bus at 7:30 p.m. after standing in line, added: “My wife said: what if this happens during the Olympics?” Typhoon Faxai, a Lao woman’s name, slammed ashore near the city of Chiba shortly before dawn, bringing with it wind gusts of 207 kmh (128 mph), the strongest ever recorded in Chiba, national broadcaster NHK said.

A woman in her fifties was confirmed dead after she was found in a Tokyo street and taken to hospital. Footage from a nearby security camera showed she had been smashed against a building by strong winds, NHK reported.

Another woman in her 20s was rescued from her house in Ichihara, east of Tokyo, after it was partly crushed when a metal pole from a golf driving range fell on it. She was seriously injured.

Some minor landslides occurred and a bridge was washed away, while as many as 930,000 houses lost power at one point, NHK said, including the entire city of Kamogawa. But the number of homes without power had dropped to 840,000 by early Monday afternoon, the Ministry of Economy, Trade and Industry said.