Home / International/ Trump says he had to ‘take China on’, regardless of short-term impact on US economy

Trump says he had to ‘take China on’, regardless of short-term impact on US economy 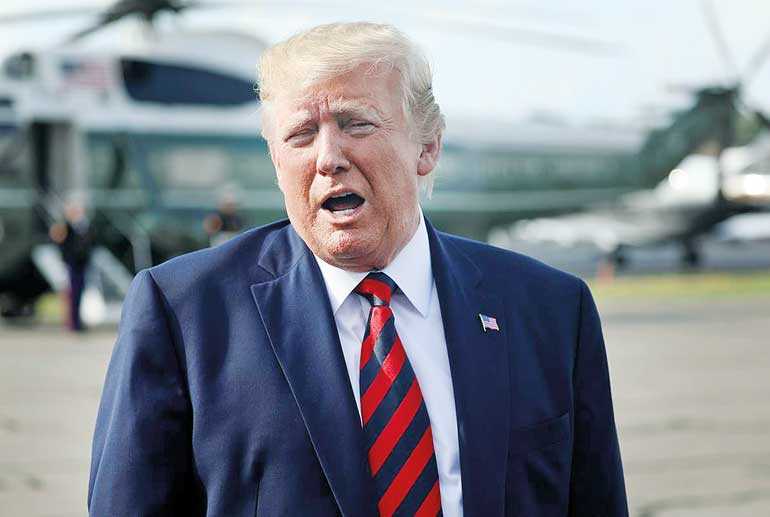 WASHINGTON (Reuters): President Donald Trump on Tuesday said he had to confront China over trade even if it caused short-term harm to the US economy because Beijing had been cheating Washington for decades.

Trump’s strongly worded comments came hours before his government announced approval of an $ 8 billion sale of Lockheed Martin F-16 fighter jets to Taiwan, a move sure to draw Beijing’s ire and further dim prospects for a quick trade deal.

On Monday, Vice President Mike Pence had also poked China on another sensitive topic, Hong Kong, calling on Beijing to respect the integrity of the former British colony’s laws in its response to mass protests there.

“Somebody had to take China on,” Trump told reporters during a White House visit by Romanian President Klaus Iohannis, when asked about wide-ranging tariffs he has imposed on imports from China. “This is something that had to be done. The only difference is I am doing it,” he said.

“China has been ripping this country off for 25 years, for longer than that and it’s about time whether it’s good for our country or bad for our country short term. Long term it’s imperative that somebody does this,” he said.

Trump’s tariff plans have roiled global markets and unnerved investors as the trade dispute between the world’s two largest economies stretches into its second year with no end in sight.

Growing concerns that the trade war could trigger a possible US recession weighed on financial markets last week and seemed to put administration officials on edge about whether the economy would hold up through the November 2020 presidential election.

Democrats on Sunday argued Trump’s trade policies were posing an acute, short-term risk. US stock markets tanked last week on recession fears with all three major US indexes closing down about 3% on Wednesday, although they pared their losses by Friday.

Trump, who is seeking re-election, again dismissed recession fears, saying: “We’re far from recession.” Secretary of State Mike Pompeo told CNBC that US and Chinese officials were expected to speak by telephone about the trade disputes over the next week to 10 days, followed by a possible in-person meeting. But trade experts said the prospects for productive trade negotiations were clouded by Washington’s increasingly combative stance against China, including the arms sale to Taiwan and its increasingly tough language on Hong Kong.

The Pentagon on Tuesday formally notified Congress that the US State Department had approved the possible sale of 66 F-16 fighter jets to Taiwan, which Beijing considers a renegade province.

China, which has never renounced the use of force to bring the island under its control, has warned it could take unspecified “countermeasures” in response to the sale. Under Washington’s “one-China” policy, the US government officially recognises Beijing and not Taipei, while assisting Taiwan. It remains the main arms supplier to Taiwan. In a separate development, the US International Trade Commission said it had found that subsidised steel rack imports from China had materially harmed US industry, locking in duties imposed by the US Commerce Department on such products.

The Commerce Department last month said it had concluded that exporters from China had sold steel racks and parts at less than fair value, with total imports from China of such products amounting to about $ 200 million in 2017.