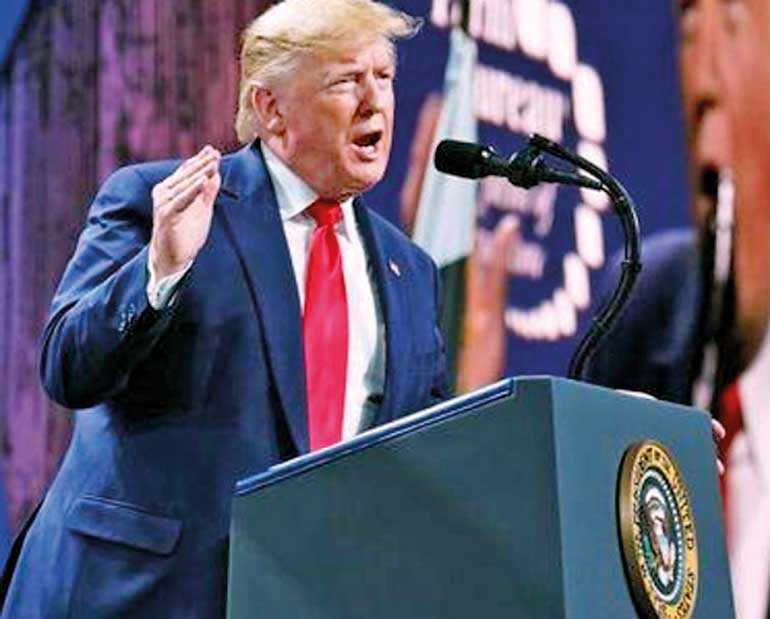 WASHINGTON (Reuters): US President Donald Trump on Monday rejected the Democratic-led House of Representatives’ impeachment charges and called for their immediate dismissal by the Republican-led Senate in a memo offering a legal and political case against his removal.

The 116-page Trial Memorandum sought to undercut charges that the Republican president abused his power and obstructed Congress, and constituted Trump’s first comprehensive defence before his Senate trial begins in earnest on Tuesday.

“The Senate should reject the Articles of Impeachment and acquit the president immediately,” the memo concluded.

Separately, Senate Republican leader Mitch McConnell put forward rules that could lead to a quick impeachment trial for Trump, with no guarantee that witnesses or new evidence would be allowed.

Under the resolution, which could face a vote as early as Tuesday, lawyers for Trump could move early in the proceedings to ask senators to dismiss all charges, a senior Republican leadership aide said, a motion that would likely fail.

Under the Republican proposal, the Senate would have to vote later on whether to even allow materials collected by the House during its impeachment investigation to be admitted as part of the trial.

Trump, only the fourth of 45 American presidents to face the possibility of being ousted by impeachment, is charged with abusing the powers of his office by asking Ukraine to investigate a Democratic political rival, Joe Biden, and obstructing a congressional inquiry into his conduct.

Democrats say Trump abused his power by withholding U.S. military assistance to Ukraine as part of a pressure campaign and obstructed Congress by refusing to hand over documents and barring administration officials from testifying, even when subpoenaed by House investigators.

Trump’s defence argued neither charge constituted a crime or impeachable offense, that he was within his rights as president to make decisions about foreign policy and what information to give Congress, and that the House pursued a flawed and one-sided process before impeaching him on Dec. 18.

The memo’s executive summary asserted that the House Democrats’ “novel theory of ‘abuse of power’” was not an impeachable offense and supplanted the US Constitution’s standard of “Treason, Bribery, or other high Crimes and Misdemeanors.”

It rejected the obstruction of Congress charge as “frivolous and dangerous,” saying the president exercised his legal rights by resisting congressional demands for information, also known as subpoenas. It also accused the House Democrats of conducting a rigged process, said they succeeded in proving only that Trump had done nothing wrong and argued, as the White House has repeatedly, that this was an effort to overturn Trump’s 2016 election victory and to prevent his re-election in November.

While the Senate is highly unlikely to remove Trump from office, it is important for him to try to diminish the Democratic accusations to limit political damage to his bid for a second term.