Trump adviser Bolton: US would enthusiastically support a UK choice for no-deal Brexit 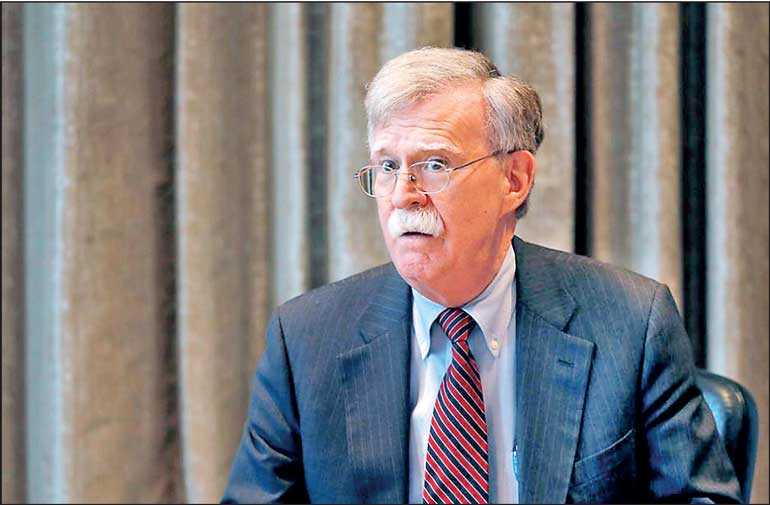 LONDON (Reuters): The United States would enthusiastically support a no-deal Brexit if that is what the British government decided to do, US national security adviser John Bolton said on Monday during a visit to London aimed at reassuring Britain over UK-US ties.

Bolton told British Prime Minister Boris Johnson that President Donald Trump wants to see a successful British exit from the European Union on Oct. 31 and that Washington will be ready to work fast on a US-UK free trade agreement.

Johnson wants the EU to renegotiate the terms of Britain’s exit ahead of an Oct. 31 departure date, but the EU says it will not alter the part of the deal Johnson says must be changed.

The impasse leaves Britain facing an exit without any formal transition period or legal agreement covering issues such as trade, data transfers and border policy.

“If that’s the decision of the British government we will support it enthusiastically, and that’s what I’m trying to convey. We’re with you, we’re with you,” Bolton told reporters after his first day of meetings.

As Britain prepares to leave the European Union, its biggest geopolitical shift since World War Two, many diplomats expect London to become increasingly reliant on the United States.

Bolton, in London for two days of talks, is seeking an improved US-British relationship with Johnson after sometimes tense ties between Trump and Johnson’s predecessor, Theresa May.

He said British officials had given him an unmistakable sense that they were determined to honour the 2016 referendum vote to leave the EU. Bolton offered his support for this stance:

“The fashion in the European Union: When the people vote the wrong way from the way the elites want to go, it’s to make the peasants vote again and again until they get it right,” he said. The central message Bolton was delivering is that the United States would help cushion Britain’s exit from the EU with a free trade deal that is being negotiated by US Trade Representative Robert Lighthizer and his British counterpart, Liz Truss.

Bolton said Britain and the United States could agree trade deals on a sector-by-sector basis, leaving more difficult areas in the trading relationship until later.

He said the ultimate aim was a comprehensive trade deal, but highlighted that financial services could be one of the more difficult industries to reach an agreement on.

Earlier a senior Trump administration official told travelling reporters the president had wanted to work with the May government on a trade deal but her government “didn’t want do it. This government does. We’re very happy about it.”

Trump believes that “when it comes to trade negotiations the EU is worse than China, only smaller”, the official said.

“The president expressed his appreciation for the United Kingdom’s steadfast partnership in addressing global challenges and looks forward to meeting with him (Johnson) personally in the near future,” the White House said.

Bolton had been expected to urge officials from Johnson’s newly formed, eurosceptic government to align its policy on Iran more along the lines of the United States, which has pushed a much tougher line against Tehran since withdrawing from world powers’ 2015 nuclear agreement with Tehran.

But, after his meetings Bolton said talks on some of these thornier diplomatic issues could wait.

Bolton said his message had been: “We’re not here to pressure you on this ... We want to be helpful on Brexit.”

Britain, one of three European partners to the deal along with Germany and France, has so far backed the EU in sticking with the accord known as the Joint Comprehensive Plan of Action.

But the seizure of a British oil tanker in the Strait of Hormuz by Iran last month has put pressure on London to consider a more robust stance.

British marines seized an Iranian vessel, which is suspected of smuggling oil to Syria, off the coast of Gibraltar on July 4. This month, Britain joined the United States in a maritime security mission in the Gulf to protect merchant vessels.

Trump has also sought Britain’s help in getting tougher on the Chinese telecommunications firm Huawei out of concern that its next-generation 5G technology represent a national security risk. Washington wants its allies, including Britain, to avoid using equipment from Huawei.