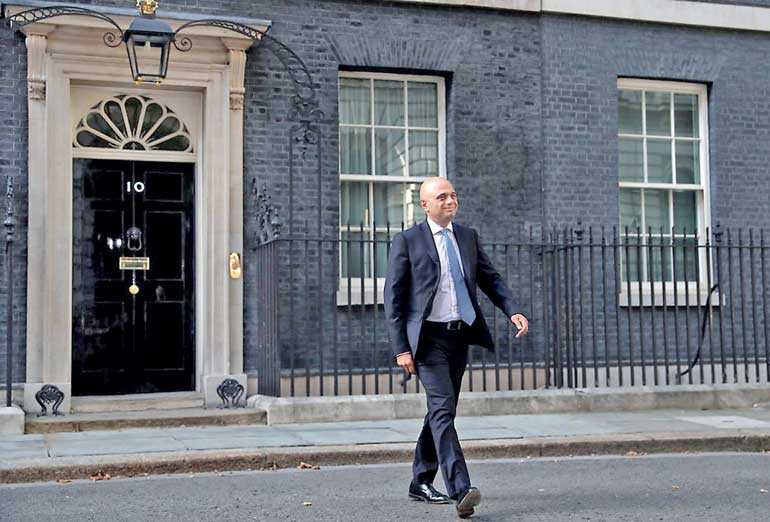 LONDON (Reuters): Sajid Javid became Britain’s first ethnic minority finance minister on Wednesday, capping off an unlikely rise from a humble start on a street dubbed the country’s worst to holding the purse strings for the world’s fifth-biggest economy.

The 49-year-old son of Pakistani Muslim immigrant parents, Javid cut his teeth early in finance, becoming a vice president at US Chase Manhattan Bank at the age of 25 and a minister just four years after entering parliament.

Javid, seen as a safe pair of hands who stirs few emotions among colleagues in the governing Conservative Party, is a great admirer of former prime minister Margaret Thatcher – he has a portrait of the “Iron Lady” in his office.

Her passion for free markets and low taxes seems to have rubbed off on a relatively shy man who, in contrast to his new boss, is not known for his oratory.

He has also called for a big increase in public investment infrastructure projects, a policy more associated with the Labour opposition than his Conservative Party.

Asked by a Conservative what being a party member meant to him, Javid said: “Conservatism is how I got to where I am.”

“It provides two essential things in life: a strong foundation of values and society, and a springboard of freedom and opportunities.”

Javid will have to manage the economy at a time when it could be abruptly wrenched out of the European Union, pick the next Bank of England Governor and protect London’s position as one of the world’s top two finance centres.

He will probably also to have to find a way to relax austerity with the economy facing a slowdown, and possibly a recession. Some investors are worried about Britain’s large balance of payments deficit.

His appointment signals Johnson’s intent with the economy – he wants to see a more interventionist approach – but also underlines his desire to have someone who will help, rather than hinder, his “do or die” pledge to leave the EU by Oct. 31.

“Javid will be a great choice as chancellor,” said Iain Anderson, executive chairman of Cicero, a public affairs company that has represented many FTSE 100 firms. “He cares about business and wants to incentivise it.”

Javid said during his failed bid to lead the Conservative Party that he would prepare for a no-deal Brexit with an emergency budget that would include tax cuts for businesses and individuals.

He also has proposed the creation of a 100 billion-pound ($ 125 billion) National Infrastructure Fund to take advantage of ultra-low borrowing costs and invest in projects that would rebalance the economy, taking a leaf out of the book of Britain’s left-wing opposition Labour Party.

But as a eurosceptic who voted to remain in the 2016 referendum, Javid must persuade the hardline Brexit supporters within his own party that he will now work to deliver Britain’s departure from the EU.

“He’s not got star quality. He’s the kind of bloke you’d want to hire as your accountant,” said one veteran Conservative and Brexit supporter on condition of anonymity.

“He’s nerdy, a bit like Hammond, which isn’t a compliment,” he said of the outgoing finance minister Philip Hammond, who Brexit supporters felt talked Britain down by failing to promote the country’s future outside the EU.

Being a “nerd”, though, might just be what Johnson needs in his finance minister, a role just one step away from the pinnacle of British power which can make or break a prime minister’s reign.

With Johnson banking on his optimism and “can do” spirit to break an impasse over Brexit, he will need someone who can ensure the economy weathers Britain’s departure from the EU.

After holding up better than expected after Britain’s shock vote to leave the European Union in 2016, the economy is showing signs of a slowdown – and possibly even a recession.

Javid said during his leadership bid he would prepare for a no-deal Brexit with an emergency budget that would include tax cuts for businesses and individuals.

Now Chancellor of the Exchequer, the formal title of the finance minister in Britain, this son of a bus driver has come a long way since growing up in Bristol’s Stapleton Road, once dubbed Britain’s worst street by a newspaper.

In politics, his ascension was also swift. Elected to parliament in 2010, he became secretary of state for culture just four years later, putting him in charge of an entire government department.

He was later promoted to the interior ministry, one of the big offices of state.

Now Javid, who says he felt like an outsider at the age of six, becomes finance minister and, as the economy stalls, he may have to draw on some the resilience that he described during his party leadership campaign.