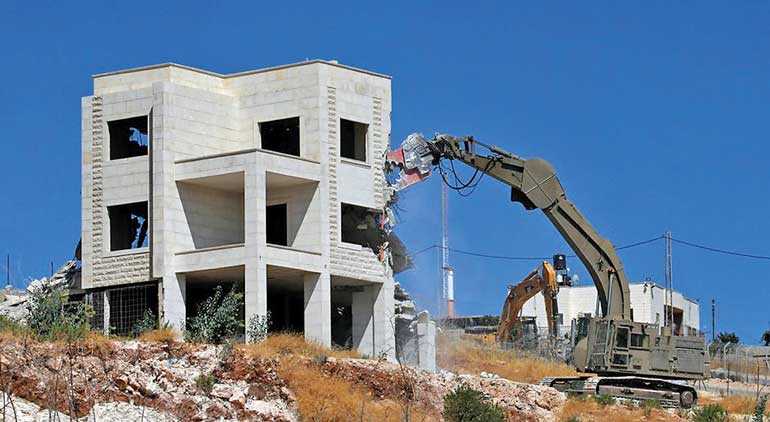 SUR BAHER, West Bank (Reuters): Israeli forces began demolishing Palestinian homes near a military barrier on the outskirts of Jerusalem on Monday, in the face of protests and international criticism.

Bulldozers accompanied by hundreds of Israeli police and soldiers moved into Sur Baher, a Palestinian village on the edge of East Jerusalem in an area that Israel captured and occupied in the 1967 Middle East War.

Palestinians fear the razing of buildings near the fence will set a precedent for other towns along the route of the barrier, which runs for hundreds of kilometres around and through the Israeli-occupied West Bank.

The demolition is the latest round of protracted wrangling over the future of Jerusalem, home to more than 500,000 Israelis and 300,000 Palestinians, and sites sacred to Judaism, Islam and Christianity.

Israeli forces cut through a wire section of the barrier in Sur Baher under cover of darkness early on Monday, and began clearing residents.

Bulldozers and mechanical diggers began tearing down homes on both sides of the barrier as security forces prepared a partly constructed nine-storey building for demolition.

“They have been evacuating people from their homes by force and they have started planting explosives in the homes they want to destroy,” said Hamada Hamada, a community leader.

Israel’s Supreme Court ruled in June that the structures violated a construction ban. The deadline for residents to remove the affected buildings, or parts of them, was Friday.

But Palestinian owners said their buildings lay within areas run by the Palestinian Authority, which exercises limited self-rule in the Israeli-occupied West Bank.

Palestinian Prime Minister Mohammad Shtayyeh said the Palestinians would complain to the International Criminal Court about the demolitions in Sur Baher.

“The Cabinet condemns this grave aggression. This is a continuation of the forced displacement of the people of Jerusalem from their homes and lands — a war crime and a crime against humanity,” Shtayyeh said.

The Palestine Liberation Organiation issued a statement in the build-up to the demolition accusing the Israeli court of aiming “to set a precedent to enable the Israeli occupying forces to demolish numerous Palestinian buildings located in close proximity” to the barrier.