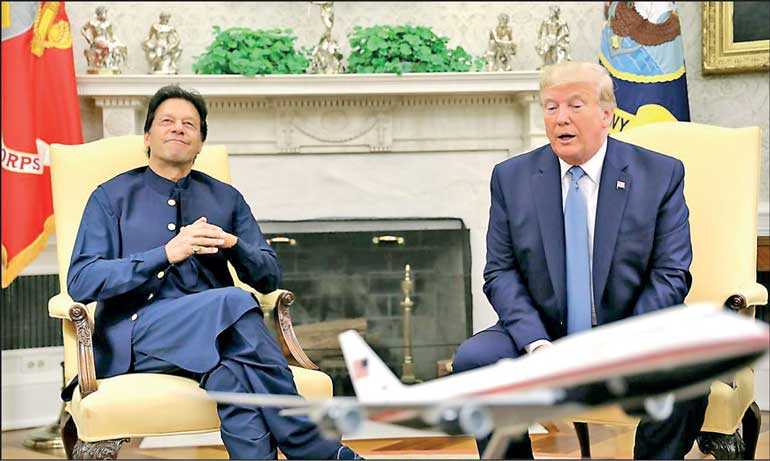 ISLAMABAD (Reuters): Pakistani Prime Minister Imran Khan returned home from Washington on Thursday after a visit seen by supporters as a major diplomatic success, saying he felt like he had when he came back after winning the cricket World Cup.

US President Donald Trump’s warm reception of Khan and a delegation including the army chief and the head of the powerful ISI intelligence service was a welcome relief to a government under increasing economic pressure at home.

Offering reassurance that Pakistan would help seal a peace agreement with the Taliban to allow US troops to withdraw from Afghanistan, Khan went some way towards rebuilding Pakistan’s image in Washington after years of US suspicions.

While there was no announcement that the United States would restore hundreds of millions of dollars in security assistance cut off last year, the visit sent a signal that relations had improved significantly.

“For now, I think the Pakistani side would be happy with what they got,” said Umer Karim, a visiting fellow at the Royal United Services Institute in London.

He said the presence of the army chief, General Qamar Javed Bajwa, and ISI head General Faiz Hameed alongside Khan in Washington were a strong signal that US mistrust of Pakistan’s security establishment had eased.

“Those optics are optics of rehabilitation, re-engagement on a strategic level,” he said.

By contrast, the US President managed to annoy India, Pakistan’s longtime foe, with an unexpected offer to mediate in the decades-long dispute over the Himalayan region of Kashmir.

Trump also caused outrage in Kabul with an apparently throwaway remark that Afghanistan could be “wiped off the face of the earth”.

The United States has for years been doubtful about Pakistan’s wholehearted commitment to the US-led war on terrorism, largely because of suspicion that Pakistan sees some militants, including the Afghan Taliban, as useful tools in its rivalry with India.

Trump has also been suspicious of Pakistan, saying last year that “they don’t do a damn thing for us” despite receiving more than a billion dollars in aid a year.

However, the need to reach a settlement with the Taliban to end more than 18 years of US military involvement in Afghanistan and Pakistan’s assurances that it would use its influence with the militant group helped change the mood.

Pakistani officials had laid the groundwork for the visit months earlier, with a visit to Islamabad in January by Senator Lindsey Graham, a staunch Trump ally who has argued strongly against any precipitous US pullout from Afghanistan.

A visit to Pakistan in February by Saudi Crown Prince Mohammad bin Salman was also vital in securing the support of another leader on close terms with the Trump administration, one senior Pakistani official said.

“I feel like I am not coming here from a foreign trip but that I am returning after winning the World Cup,” Khan said as hundreds of supporters cheered him on at the Islamabad airport.

Khan led Pakistan to victory in the cricket World Cup in 1992.