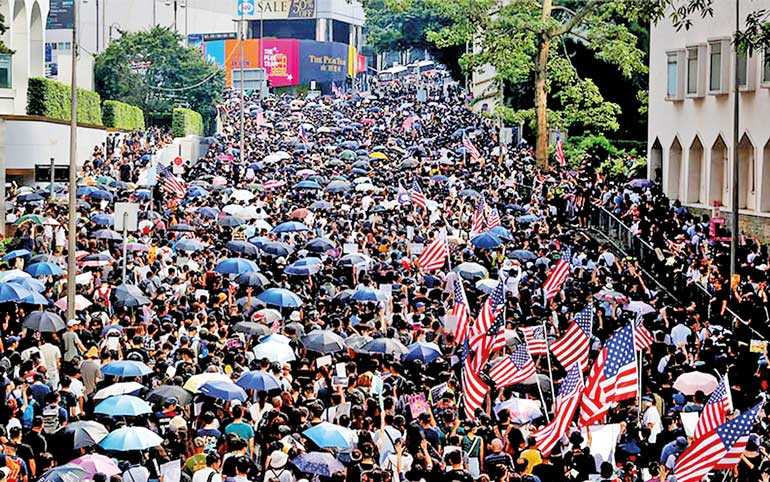 Protesters hold umbrellas and US flags during a rally to the US Consulate General in Hong Kong, China, September 8, 2019 - Reuters

HONG KONG (Reuters): Hong Kong Police fired tear gas to disperse protesters in the upmarket Causeway Bay shopping district yesterday, after demonstrators had rallied at the US Consulate calling for help in bringing democracy to the Chinese-ruled city.

Police moved on protesters from the Central business district who dispersed to nearby Admiralty, the bar district of Wan Chai and on to Causeway Bay in a now familiar pattern of cat-and-mouse clashes over three months of unrest.

“We can’t leave because there are riot police,” said protester Oscar, 20, in Causeway Bay. “They fired tear gas from the station. We are heading to North Point.”

Thousands of protesters earlier sang the Star Spangled Banner and called on US President Donald Trump to “liberate” the city. They waved the Stars and Stripes and placards demanding democracy.

“Fight for freedom, stand with Hong Kong,” they shouted before handing over petitions at the US Consulate. “Resist Beijing, liberate Hong Kong.” US Defense Secretary Mark Esper on Saturday urged China to exercise restraint in Hong Kong, which returned to Chinese rule in 1997.

Esper made his call in Paris as Police in Hong Kong prevented protesters from blocking access to the airport but fired tear gas for a second night running in the densely populated district of Mong Kok.

Last month Trump suggested China should “humanely” settle the problem in Hong Kong before a trade deal is reached with Washington. Earlier Trump called the protests “riots” that were a matter for China to deal with.

The vandalism started in the evening. Police have responded to violence over 14 weeks with water cannon, rubber bullets and tear gas.

Several arrests were made.

Hong Kong returned to China under a ‘one country, two systems’ formula that guarantees freedoms not enjoyed on the mainland. Many Hong Kong residents fear Beijing is eroding that autonomy.

China denies the accusation of meddling and says Hong Kong is an internal affair. It has denounced the protests, accusing the US and Britain of fomenting unrest, and warned of the damage to the economy.