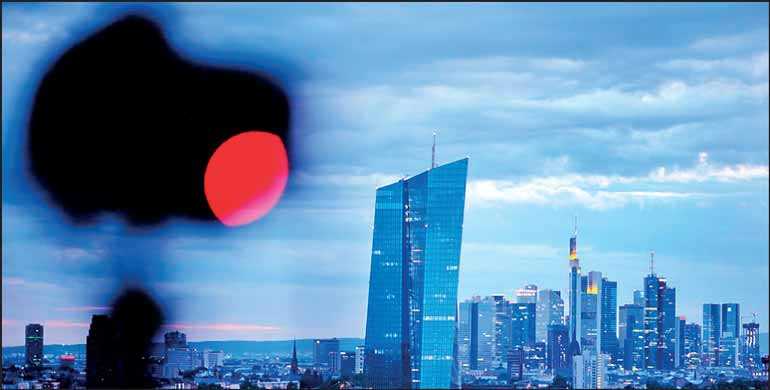 The skyline, with the banking district and the European Central Bank (ECB) visible, in Frankfurt, Germany – Reuters

BENGALURU (Reuters): Euro zone business growth picked up a touch in August, helped by brisk services activity and as manufacturing contracted at a slower pace, but trade war fears knocked future expectations to their weakest in over six years, a survey showed.

Despite increasing worries about a global slowdown, the US and China have shown no sign of backing down in their trade war.

That has pushed businesses to be less hopeful of a significant acceleration in economic activity anytime soon, which will in turn underscore policymakers’ pledges for more accommodative policy.

IHS Markit’s Euro Zone Composite Flash Purchasing Managers’ Index (PMI), seen as a good guide to economic health, climbed in August to 51.8 from 51.5 in July and above 51.2 predicted in a Reuters poll. Anything above 50 indicates growth.

The composite future output index measuring overall business optimism sank to 55.5, its lowest since May 2013, from 58.8 in July.

“The dynamics of the euro zone economy were little changed in August, with solid growth in services continuing to hold the wider economy’s head above water despite ongoing manufacturing decline,” noted Chris Williamson, chief business economist at IHS Markit.

“While the rate of overall expansion ticked up, we’re still looking at GDP only rising by between 0.1% and 0.2%, based on the PMI data for the third quarter so far.”

There was a modest revival among firms operating in the bloc’s dominant services industry. The flash services PMI rose to 53.4 from July’s 53.2, above the 53.0 expected in a Reuters poll.

Still, in another sign of scant optimism in boardrooms, a business expectations sub-index fell to a near five-year low of 57.3 from 61.2 in the previous month.

Factory activity contracted for the seventh month in a row, although at a slower rate than the previous month, with the related index rising to 47.0 from 46.5 in July, beating the 46.2 forecast in a Reuters poll.

An index measuring output, which feeds into the composite PMI, came in at 47.8, marking a slower pace of contraction than the 46.9 logged in July.

However, the future output index which measures optimism among factories fell to 51.0, its lowest since November 2012.

“The lack of a quick rebound from the recent economic slowdown has impacted firms’ confidence... It appears that companies are braced for a sustained period of weakness, and as a result are showing greater reluctance to take on additional staff,” added Williamson.