Home / International/ Chinese intervention in Hong Kong would be a ‘catastrophe,’ Patten says

Chinese intervention in Hong Kong would be a ‘catastrophe,’ Patten says 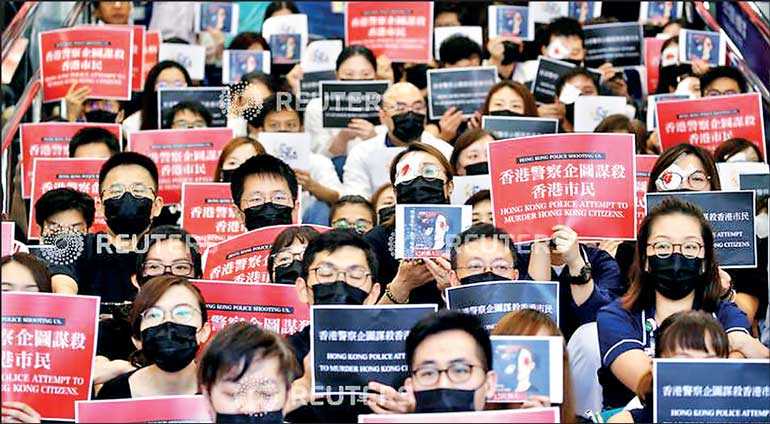 LONDON (Reuters): Hong Kong’s last British governor Chris Patten on Tuesday cautioned that if China intervened in Hong Kong it would be a catastrophe and that Chinese President Xi Jinping should see the wisdom of trying to bring people together.

Patten said it was counterproductive of the Chinese to warn of “other methods” if the protests did not stop.

“That would be a catastrophe for China and of course for Hong Kong,” Patten told BBC radio. “Since President Xi has been in office, there’s been a crackdown on dissent and dissidents everywhere, the party has been in control of everything.”

Hong Kong returned to Chinese rule in 1997 with a guarantee that under a ‘one country, two systems’ mode of governance, the city would retain a high degree of autonomy, an independent judiciary and freedoms not allowed in mainland China.

Demonstrations have plunged the Chinese-ruled territory into its most serious crisis in decades, presenting Chinese leader Xi with one of his biggest challenges since he came to power in 2012.

Demonstrators say they are fighting the erosion of the “one country, two systems” arrangement.

Patten said British Prime Minister Boris Johnson should ask US National Security Advisor John Bolton who is in London this week to get Washington to agree that it would be a “catastrophe” if China was to intervene in Hong Kong.

“I very much hope that even after 10 weeks of this going on, the government and President Xi will see the sense in establishing a way of actually bringing people together,” Patten said. Hong Kong leader Carrie Lam said on Tuesday the city’s recovery from protests that have swept the Asian financial hub could take a long time and that she would be responsible for rebuilding its economy “after the violence eases”.

Her comments followed serious developments in the growing crisis over the past week. Beijing said on Monday the protests had begun to show “sprouts of terrorism” and the city’s airport was closed.

“There is a degree of frustration and anger at the government refusing to give any sensible ground at all which probably provokes more violence,” Patten said.

“I can’t believe that any rational person in Carrie Lam’s position would actually argue the case against a commission of inquiry,” he said.

“What’s clearly needed is a process of reconciliation. It’s the only way I think you’ll put a cap on this and get back to peace and stability in