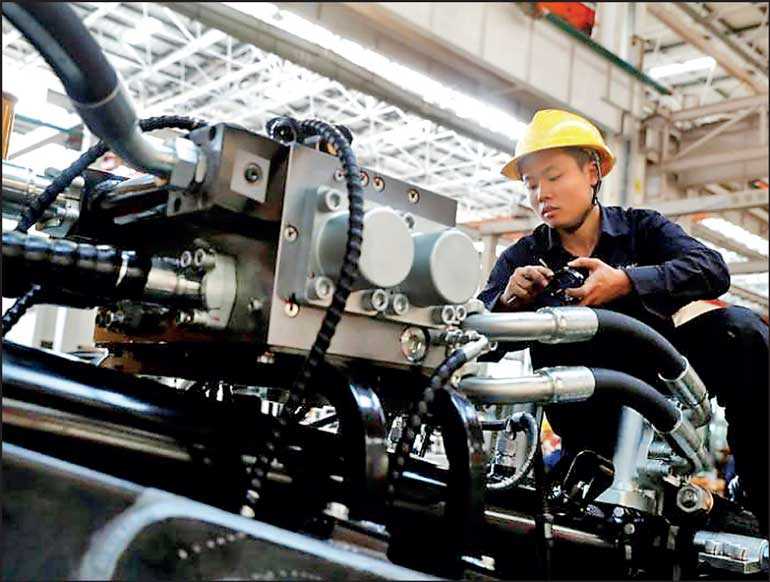 An employee works at a manufacturing plant of Sany Heavy Industry Co. during a government-organised tour of manufacturers based in Changsha, Hunan province, China – Reuters

BEIJING (Reuters): China is confident of maintaining steady industrial growth this year despite big pressures on the sector, underpinned by tax cuts and broad policy support, Minister of Industry and Information Technology Wei said on Monday.

The country’s industrial output topped expectations in December by growing 6.9% from a year earlier, the strongest pace in nine months, bringing full-year 2019 expansion to 5.7% - within the government’s target of 5.5-6.0%.

Growth in the world’s second largest-economy cooled to a near 30-year low of 6.1% in 2019 amid a bruising trade war with the United States, and more stimulus is expected this year as Beijing tries to boost sluggish domestic demand.

But the government will be able to “ensure the smooth operation of the industrial economy” this year as big tax cuts and policy efforts to ease corporate funding strains have started to gain traction, he said.

Beijing will continue to implement tax and fee reduction measures this year, focusing on the manufacturing sector, Miao said without giving details.

China will increase investment in research and development and use other policy incentives to help promote innovations and upgrade the manufacturing sector, Miao said.

China welcomes foreign firms to participate in the building of its 5G networks and opposes politicizing the technology issue, he said, in an apparent criticism of Washington’s moves against Huawei, the world’s largest maker of mobile networking equipment.

Washington is trying to persuade Britain not to use Huawei equipment in the upgrade of its telecoms network.

Wen Ku, spokesman and head of the information and communication department at the ministry, said China has been conducting research on 6G for two years, but to date the government “had no obvious or standout results to share with anyone.”

China expects vehicle sales to remain at around 25 million units in 2020, and they could be flat from last year or decline, the minister added.