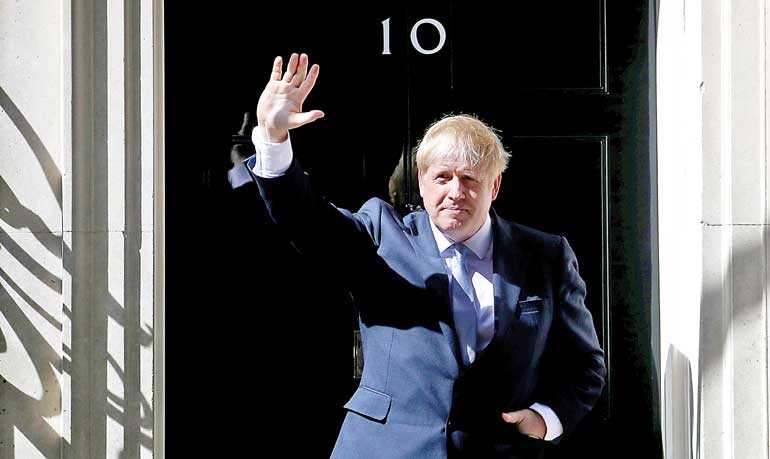 LONDON (Reuters): Boris Johnson used his first speech as Prime Minister to vow to lead Britain out of the EU on 31 October “no ifs or buts”, warning that if the EU refused to negotiate then there would be a no-deal Brexit.

Johnson, who has been hailed by US President Donald Trump as Britain’s Trump, is sending the strongest message yet to the EU that he will be taking a distinctly tougher approach to negotiating the Brexit divorce deal.

He enters Downing Street at one of the most perilous junctures in post-World War Two British history – the UK is divided over Brexit and weakened by the three-year political crisis that has gripped it since the 2016 referendum.

“We are going to fulfil the repeated promises of Parliament to the people and come out of the EU on 31 October, no ifs or buts,” Johnson, 55, said after arriving at his new residence, No. 10 Downing Street.

“We can do a deal without checks at the Irish border,” Johnson said, watched by his girlfriend Carrie Symonds and his staff. “It is of course vital at the same time that we prepare for the remote possibility that Brussels refuses any further to negotiate and we are forced to come out with no deal.” One of Britain’s most prominent Brexit campaigners, Johnson has repeatedly pledged to leave the EU by 31 October – “do or die” – and to inject a new optimism and energy into the divorce, which he argues will bring a host of opportunities.

But his strategy sets the UK up for a showdown with the EU and thrusts it towards a potential constitutional crisis, or an election, at home.

One of the issues that prevented his predecessor Theresa May getting a divorce deal through Parliament was the Irish “backstop” – a provision that would maintain a customs union with the EU if no better solution was found.

Johnson was bullish, however. “Never mind the backstop. The buck stops here,” he said.

He said he would ensure “the people” were his boss and that he would accelerate preparations for a “no-deal” Brexit – a threat he intends to use to force a reluctant EU to renegotiate the exit deal it agreed with May but which Parliament has rejected three times.

To implement Brexit, Johnson will appoint Dominic Cummings, the campaign director of the official Brexit Vote Leave campaign, as a senior adviser in Downing Street.

Earlier May, who had formally tendered her resignation to Queen Elizabeth, left Downing Street after a three-year premiership marred by crises over Brexit.

She appeared to be fighting back tears as she was applauded out of the House of Commons chamber.

Johnson had a possible foretaste of turmoil ahead when, as he drove to his audience with the Queen, Greenpeace protesters tried – but failed – to block the path of his car as his chauffeur drove around them.

Now formally “Prime Minister and First Lord of the Treasury”, Johnson’ first task will be to appoint key members of the Government – names that will give a hint of how he will handle Brexit, Britain’s most significant decision in decades.

But ‘Prime Minister Johnson’ – a man known for his ambition, blond hair, flowery oratory and cursory command of detail – must solve a series of riddles if he is to succeed where May failed.

The 2016 Brexit referendum showed a UK divided about much more than the EU, and has fuelled soul-searching about everything from secession and immigration to capitalism, the legacy of empire and modern Britishness.