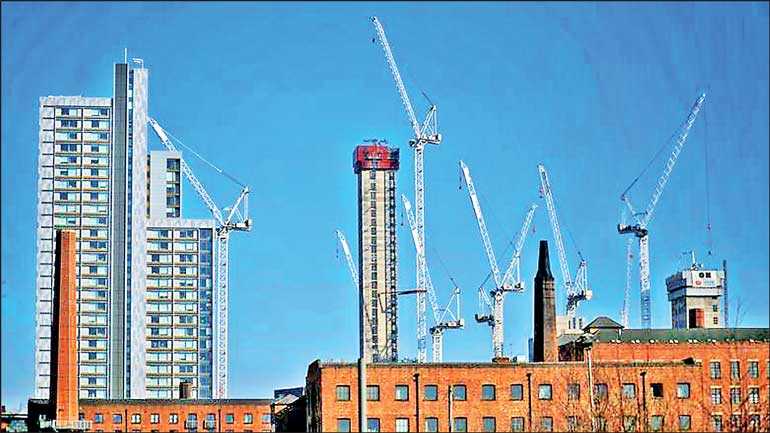 Construction cranes are seen above a refurbished Mill building in the city centre of Manchester, Britain – Reuters

LONDON (Reuters): British construction companies suffered the sharpest drop in new orders since the depths of the financial crisis last month as the Brexit crisis scared away potential customers, a survey showed on Tuesday.

The IHS Markit/CIPS UK Construction Purchasing Managers’ Index (PMI) fell to 45.0 from 45.3 in July, confounding expectations for an improved reading of 45.9 in a Reuters poll of economists.

Overall, the survey is likely to add to questions over Britain’s ability to bounce back from an economic contraction in the second quarter, a hangover from the stockpiling boom in advance of the original March Brexit deadline.

Another contraction in the current quarter would officially herald a recession.

The growing signs of a wilting economy — similar to elsewhere in Europe — raise the stakes for Prime Minister Boris Johnson in his standoff with Brussels.

The PMI’s new orders index fell to its lowest level since March 2009, when Britain was deep in its last recession.

“Domestic political uncertainty continued to hold back the UK construction sector in August, with survey respondents indicating that delays to spending decisions had contributed to the sharpest fall in new work for over 10 years,” IHS Markit economist Tim Moore said. Business expectations across the construction industry as a whole, which accounts for around 6% of economic output, fell to their lowest level since December 2008.

Investors will be watching Wednesday’s PMI for the much larger services sector to see if the weak readings from the manufacturing and construction surveys are reflective of the whole economy.