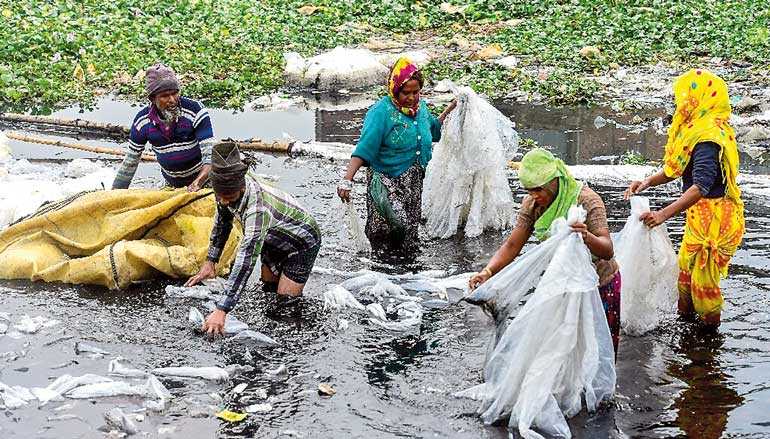 Workers scrub plastic bags used to carry industrial chemicals in the Buriganga river, which has become one of the world's most polluted waterways

Dhaka, AFP: Bangladesh’s high court has ordered the shutdown of 231 factories that have contributed to Dhaka’s main river becoming one of the world’s most polluted, a lawyer said Tuesday.

The country is crisscrossed by hundreds of rivers, but a recent industrial boom, including the emergence of the world’s second biggest garment industry, has prompted officials to turn a blind eye to the industrial waste they dump into rivers.

In a landmark decision hailed by activists, the court Monday ordered the authorities to take immediate action against the 231 factories including dyeing and rubber plants and tanneries dumping effluent into the Buriganga.

“The court asked them to disconnect all utilities including electricity, gas and water supplies to these factories,” lawyer Manzil Murshid, who filed the public interest litigation, said.

“This order will go a long way to save the Buriganga from an ecological disaster,” he told AFP.

The Buriganga connects the capital with the southern coastal districts through a network of rivers. For centuries it was the gateway to the 400-year-old city built by the Mughals.

But for decades, more than 100 tanneries dumped industrial effluent into the river, turning it into one the world’s dirtiest waterways, according to Ainun Nishat, a river expert.

According to the Human Rights Watch, each day the tanneries would discharge some 21,000 cubic metres (5.5 million US gallons) of untreated waste containing chromium, lead and other chemicals into the Buriganga.

Although under international pressure the tanneries were forced to relocate in 2017, hundreds of illegal factories, most constructed without complying with environmental regulations, continued to pollute the river.

“We welcome the decision because these factories kept on polluting the river as they didn’t have any effluent treatment plants,” Nishat said, adding he hoped the authorities would overcome “political pressure” to execute the order.

National River Conservation Commission of Bangladesh (NRCCB), the state-run legal guardian of all Bangladesh rivers, has called the verdict “a great achievement”. “These factories have been committing two grievous crimes. They don’t have environmental approvals and have been polluting rivers for years,” NRCCB chairman Mujibur Rahman Howlader told AFP.

Howlader said the court decision would strengthen the authorities against influential factory owners. “We’ll monitor the progress of the compliance,” he said.

In recent years the government of Prime Minister Sheikh Hasina has stepped up efforts to save rivers by ordering a nationwide drive to evict businesses, squatters and illegal factories from their shores.

Sheikh Rokon, the head of Riverine People advocacy group, said “at least 38 rivers are now dying due to unbridled pollution and land grabbing”.

“The government must act fast against the polluters and grabbers. Otherwise, these rivers will be wiped off the country’s map,” he said.