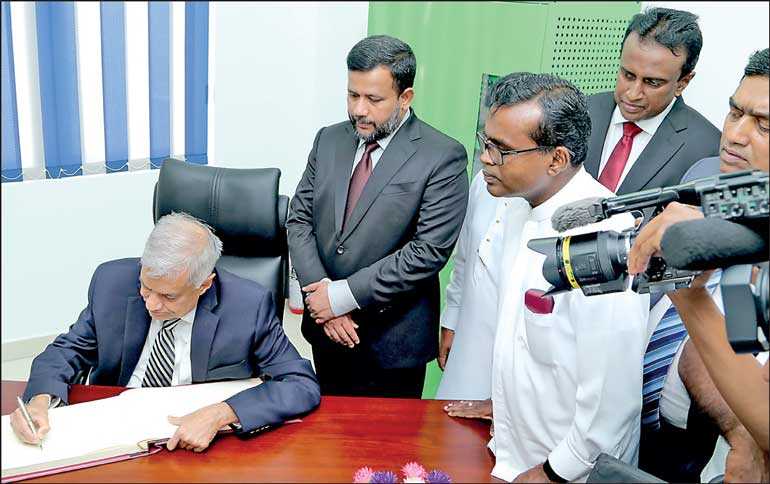 Backed by the global industrial giant South Korea, Sri Lanka launched its most modern national hi-tech training facility to-date on 21 August. As it unveiled its up-to-date TVET (Technical and Vocational Education and Training) facility in a Colombo suburb, Sri Lanka also said that its skills development work has shown results so much so the country retained its ranking in the firmly established global benchmark for talent competitiveness for the third year running.

The upgraded GTC under Minister Bathiudeen’s VTA, is also to be vested with the public in the last week of this month. Funding for the project has come as a loan from the Export-Import Bank of Korea, with additional support from KOICA and the Economic Development Cooperation Fund (EDCF) of Korea. KSLNVTI becomes the only institution in Sri Lanka providing training at present on three latest global hi-tech-automation and robotics tech, pneumatic and hydrolics, and CNC programming – that too, up to Diploma level 5.

They (and other courses) are taught at KSLNVTI by 15 Sri Lankan trainers who were coached by 10 Korean experts who already completed their roles and left (except for the present resident trainer). Joining the 20 August event with Minister Rishad Bathiudeen and PM Wickremesinghe were State Minister Buddhika Pathirana, Ministry Secretary K.D.N. Ranjith Ashoka, Deputy Minister of Skills Development and Vocational Training Karunarathne Paranavithana, and VTA Chairman Ravi Jayawardhana. “We need to know our challenges. We should advance from upper middle income to high income country. Korea has not only given money for this institution but technical skills as well. We thank Korea for all this support,” added PM Wickremesinghe.

Addressing the event, Minister Bathiudeen stressed of Sri Lanka’s status within global skills tables. “We all know the strong relationship between vocational training, skills development and labour productivity of any country. This year Sri Lanka again successfully retained its global ranking with regard to skills. In the 2019 Global Talent Competitiveness Index, we rank at 82nd, continuing in the same position since 2017 without a change. This year, except for India, Sri Lanka ranks higher than all South Asian countries. This unchanged rank shows that our national skills development efforts are working.

Ambassador of the Republic of South Korea to Sri Lanka Heon Lee said of the importance of human resources. “Nothing is more important than human resources,” he said and added: “10 years from now, students of KSLNVTI will lead Sri Lanka’s transformation. Congratulations to PM Wickremesinghe and other Sri Lankans here for achieving this KSLNVTI.”

Global Talent Competitiveness Index is the firmly established global benchmark for talent competitiveness and the future of work. Newly set up KSLNVTI is expected to sign an MoU with Korea’s Shinhan University in time to come. Both PM Wickremesinghe and Minister Bathiudeen also commended Parliamentarian and former Minister Mahinda Samarasinghe for his pioneering role in the KSLNVTI project. Sri Lanka’s KSLNVTI after two years from now, is expected to produce 1,000 qualified Sri Lankan youth annually for latest hi tech industries.