Home / HR/ Chair’s role is crucial for independence in boardroom

Chair’s role is crucial for independence in boardroom

The chairman is responsible for leadership of the board and is crucial for creating the culture imperative for individual director participation and overall board effectiveness.

The chairman’s role in facilitating independence in the boardroom was discussed at a recent session of the Sri Lanka Institute of Directors (SLID) Independent Directors (INED) Forum held at the Securities and Exchange Commission (SEC) Auditorium.

Dr. Cabral started the session by saying that the concept of an independent non-executive (INED) director did not arise from company law but through the listing rules. In the eyes of the law there was no distinction between an executive, non-executive or independent director – they were all equal. To date the law courts in Sri Lanka have not looked at INEDs differently from the other directors on the board.

Anyone can be a director; there is no qualification required. Dr Cabral said INEDs should infuse stature, integrity, experience and knowledge into the boardroom. An INED when appointed must serve the best interests of the company and not the interests of persons responsible in appointinghimor her.

There are two jurisdictions where it is mandatory by law to have INEDs – China and India. In China the majority shareholder does not vote in the appointment of INEDs and in India the INED must be chosen from a list established by the government.

The Chairman must ensure INEDs are allowed to be independent. Once appointed the chairman and board must listen to their views and take them seriously. He underscored the importance of appointing the right people as INEDs. 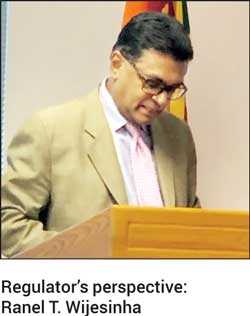 Sunil Wijesinha, sharing his own experiences, stressed that when nominating suitable candidates as INEDs it was necessary to choose people with integrity, having specific and general skills. He believed they need not have intimate knowledge of the industry concerned but should become familiar with the operating conditions of the company and industry. He as chairman encouraged naïve questions, which often turned out to be good questions. When newly appointed, he as chairman ensured that the INEDs were given an induction to provide basic knowledge of the company and industry.

Seating at board meetings can be intimidating

Wijesinha said that at board meetings INEDs should sit close to the chairman. Otherwise directors tend to have fixed places of seating at the boardroom and a new INED may sit a distance away and feel intimidated and inhibit contributions.

“Two hands are required to clap,” quipped Kumar Jayasuriya. The company should be well run, adhering to principals of good governance and ethical, and the chairman should ensure the company has the stature to attract persons who can be fiercely independent and challenge views expressed by major shareholders.

Companies Act requires all directors to be independent

Arittha Wikramanayake commented the Companies Act requires everyone appointed to the board to work in the best interests of the company, act honestly and in good faith. In practice, though, it is very difficult for executive directors to be independent. He said most INEDs fit the selection criteria but do not act independently; this may be due to the board chair having a say in the selection process.

The INED should not depend too much on his emolumentsfrom the company, as this will inhibit his ability to speak out independently.

Culturally acceptable to not voice your opinion

It is typical Sri Lankan culture to listen to ‘elders’ and not question them, something that seems to also prevail in the boardroom. This must be addressed squarely as all directors stand equal on the board. The chairman should unleash the potential of an INED and enable him or her to speak out and contribute to productive discussion.

Independence does not mean objecting to everything, but healthy debate of pros and cons to makegood commercial decisions in the best interest of the company.The success of the board in this respect lies with the chairman.

Chairman is the conductor of an orchestra

Manil Jayesinghe said the chairman is like the conductor of an orchestra. Effectiveness of the board meeting depends on the chairman. The chairman must ensure discussion is kept relevant and focussed; he must solicit different views so the board reaches an educated conclusion.

Setting the agenda for meetings and sequencing agenda items is an important responsibility of the chairman and the company secretary. Meticulous planning can make a meeting most productive.

Jayesinghe commented that compensation influences the behaviour and decisions of directors. He suggested that when potential INEDs are identified, the focus should be on people who value and safeguard their own integrity and reputation.

The board’s role is oversight whilst the executive directors’ and management’s responsibility is execution of the strategy. The chairman should solicit INED views and not allow biased views from executive directors to dominate discussions.

Back channel or offline discussions

During the discussion a participant shared his experience where the chairman and other directors had not considered his views as an INED at the board meeting but commended him offline after the meeting. He asked, against this backdrop what should an INED do?

Dr. Cabral felt the approach depended on the chairman, who might consult INEDs prior to the meeting on a particular subject and obtain their views, and then play a balancing act at the meeting.

If the INED feels his voice is not heard or his independence is disregarded, it may be time to consider exiting from the board.

Sunil Wijesinha said the use of offline discussions occurred in practice. He was once chairman of a family-owned company where decisions were usually made at family gatherings and later ratified at board meetings. He said an INED should not be reluctant to speak up. As chairman he would have prior discussions with the INED giving him or her the background to an issue and prepare him for the meeting at which it is taken up for discussion.

Kumar Jayasuriya said if it was an important issue he did not encourage back channel communication. If there was such communication, he would call for another meeting to discuss the issue in question again and reach agreement.

An opposing argument is not a personal attack

Arittha Wikramanayake commenting on a cultural factor said unlike lawyers, who though they are opponents in court leave court as friends, opposition in the boardroom may be taken personally. The chairman must make it clear that a contrary view expressed is not a personal attack and should not be taken as such.

Faizal Salieh said whether it is offline (via back channels) or online, the board chair was responsible to balance out discussion. An open and transparent boardroom culture would use more online and minimal offline discussions. There are times when offline pre-board meeting engagements help clarify and refine the focus on board agenda matters more productively during the board meetings.

What should an INED do if the chair does not facilitate independence?

A participant questioned how an INED should handle a situation where the chairman does not facilitate independence. Much depends on the courage and independence of the INED. If there are other INEDs they could meet separately and discuss how meetings can be more effective and governance improved in the boardroom.

Back channel discussions may need to be conducted before board meetings; INEDs having one voice at the meeting may help. The chairman must understand issues and concerns and take note of them. Having discussion after board meetings may be generally unproductive. The Corporate Governance Code brings in the concept of a senior INED when the chairman himself is not an independent director. The person should be senior and strong-willed enough to contest the chairman. In practice this may not be the case.

Views expressed at board meetings must be minuted. The chairman must make sure the minutes capture all views expressed.

On the question where an INED is on-boarded because he is a “subject matter expert,” how does the chair facilitate independence, the forum observed that a director is required to have reasonable knowledge and is not expected to be an expert on all matters discussed. Directors and the board may seek professional third party advice from subject matter specialists when required. Nevertheless, all INEDs must develop the ability to grasp the matters before the board in order to contribute constructively to the boardroom discussion.

The chairman should know every board member. He should engage with directors and to some degree encourage social interaction outside the boardroom. He should be cautious, though, that this could be perceived as eroding independence.

How do you facilitate independence if the chairman is also the CEO?

Ensure INEDs are a majority on the board and have the stature to ensure decisions were made after discussion, with all views heard in the boardroom. The role of the chairman is the very important one of chairing and guiding board meetings and shareholder meetings.

Should the chairman and CEO be one person?

SEC Chairman Ranel T. Wijesinha shared some views on what was discussed, and in closing asked the SLID and those present at the INED Forum to discuss and comment on the separation of the role of chairman and CEO.