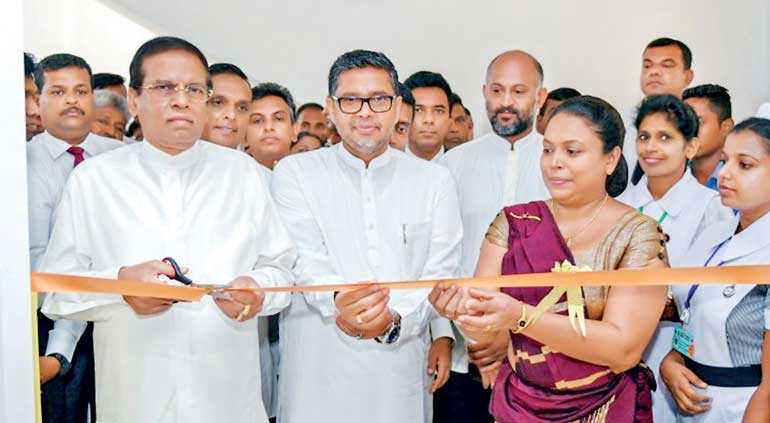 President Maithripala Sirisena yesterday said he is not alone in the battle against drug smuggling and 90% of the population in the country is standing with him in this journey.

When some people responded against his decision to impose the death penalty for drug smugglers, it indirectly benefitted criminals, drug smugglers and corrupt people, he said, addressing a ceremony held in Ratnapura.

President Sirisena said that he takes all decisions needed to create a better country for the future generation and further said that all politicians, public servants and intellectuals should come forward to fulfil the respective duties towards the motherland, the President Media Division said in a media release.

This ceremony was held to launch the ‘Sabaragamuwa Lassanai’ program.

The President unveiled the name board titled ‘Sabaragamuwa Lassanai’ using a remote control. The book compiled in this regard was presented to the President by the Sabaragamuwa Province Governor Dhamma Dissanayake.

The President also launched the ‘Kithula-Kithula’ website and the ‘Sip Thathu’ website which contained information on schools in the Sabaragamuwa Province.

It was decided to provide financial sponsorship for selected 100 families to build their own houses under the ‘Ape Gedara Lassanai’ housing project implemented by the Sabaragamuwa Provincial Council and during this ceremony the President symbolically handed over documents in this regard to those house recipients.

A souvenir gift was also presented to President Sirisena at this event. After that, the President also visited the Kithul production based exhibition as well.

President Sirisena handed over the fifth floor building of the Eheliyagoda General Hospital and the 120-bed ward complex to the public today under the ‘Sabaragamuwa Lassanai’ program. The President also vested in the public the new Bhikkhu ward complex constructed by two donors in the Eheliyagoda area and the X-ray section constructed by a businessman.

The President handed over the development work to the public and had a friendly visit with the staff while inspecting the hospital.

Then, the President also presented awards of appreciation to the donors who contributed to the development activities.

The President also presented an award of appreciation to former Medical Superintendent Dr. Shantha Abeywickrama who pioneered the historical development of the Eheliyagoda Base Hospital.

The President also declared open the Teachers Home built at Siri Saman Vidyalaya, Talawitiya at a cost of Rs. 15.89 million under the ‘Langama pasala – hodama pasala’ program. In addition, the Library, Mathematic Lab and Science Lab also handed over to the students by President today.