‘Sub-Marine,’ an exhibition by Chudamani Clowes opens to the public today 15 December and will remain open daily until 4 January 2019 at the Saskia Fernando Gallery, 41 Horton Place, Colombo 7, from 10 a.m. to 6 p.m.

London-based Sri Lankan-born artist Chudamani Clowes holds a BA (hons) in Fine Art from the Central Saint Martins College of Art & Design (2008) and a Post-Graduate Certificate of Education from the University of London. 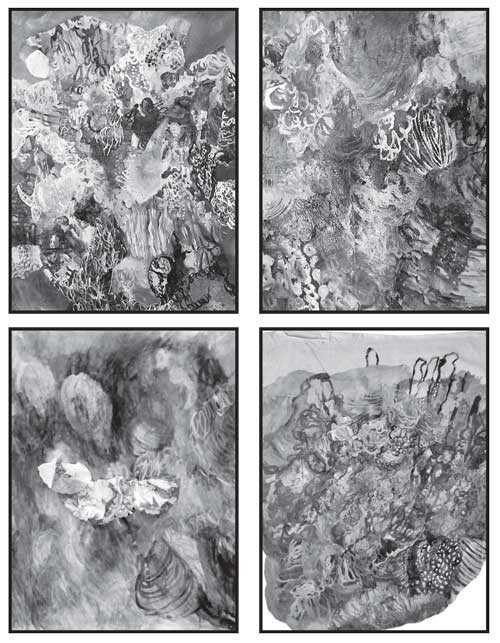 Clowes’s work is inspired by a childhood memory of playing with an elephant skull. She managed to link this memory with the Empire shows that took place last century when elephant troops were brought over from Ceylon, all the way to London to perform in front of an audience. She is interested in post-colonial discourse, in particular addressing the use of the ethnographic archive at the British Museum in contemporary art today.

Clowes uses relief printing, etching and ceramics to create images and sculptures of fictional characters who are inspired by Victorian paintings. Clowes is inspired by Victorian paintings like ‘The Last of England’ by Ford Maddox Brown. She has remodelled the 100 characters from the painting by William Frith ‘The Day at the Races’. She is interested in how the non-European has been shown in museums.

She is reinterpreting the artefacts from her own family’s colonial past, and using the medium of print and ceramics to create her own narrative of what may have happened in the past. As a post-colonial subject, she is reclaiming objects from her family history to carry out a translation. She is creating her own historical past dealing with issues of immigration and race encountered today.

Speaking of the works in the show the artist shares, “In my title ‘Sub-Marine’ I wish to render visible those issues that have been rendered invisible and cast under the surface. In this work I am comparing the migration of coral with that of humans across the oceans to highlight migration’s many causes, from globalization, human conflict and environmental issues. In these paintings I want to address the concepts and ideas on migration by using the techniques of painting, collage and printmaking.

“My work seeks to examine the phenomena of migration, and the powerful forces of attraction that have led so many to risk these perilous journeys through passages of ungoverned spaces.  The blue surface of the water glistens with possibilities. It reflects an image of our precious hectic lives. Submerged and sub-marine, the ocean is teaming with life. Migratory activity is in perpetual motion in a wondrous saline garden. I wanted to make a link with the colonial past of Sri Lanka in my paintings.

“The coral have been given fictional names of animals that have antlers as historical link to the Victorians who named Coral after animals in their own landscapes.  The nature of coral is an urge to spread to form new colonies. As with humans it is our necessity to thrive and survive. Expect to see mountainous layers of fragile tissue etched with the markings of rescue blankets.

“My prints have been torn apart and re-assembled like the lives of many migrants. The sea is the platform for this analogy showing the hostile nature of migration and immigration. There are perilous journeys made every day and many lives lost to ocean graves. These themes are developed through my work where deep below the water’s surface there are no borders and boundaries only the continuity of coral life. The purpose of the coral is to use its allure to entice and entrap.

“These are abstract paintings, made with a cornucopia of colours and shapes. Multi-layered and textured, forming a mixed media surface of aquiline colour. I have used a vast range of techniques such as collage, printmaking and painting. Expect the unexpected in such a sub-aquatic environment, for these are journeys in a kaleidoscope world. Inspect the rich and exquisite colours that shimmer like jewels attracting and hypnotising the traveller. Choosing submarine coral also highlights the instability and volatility of the eco-system under threat from pollution and global warming. Issues facing humans in the twenty first century.”