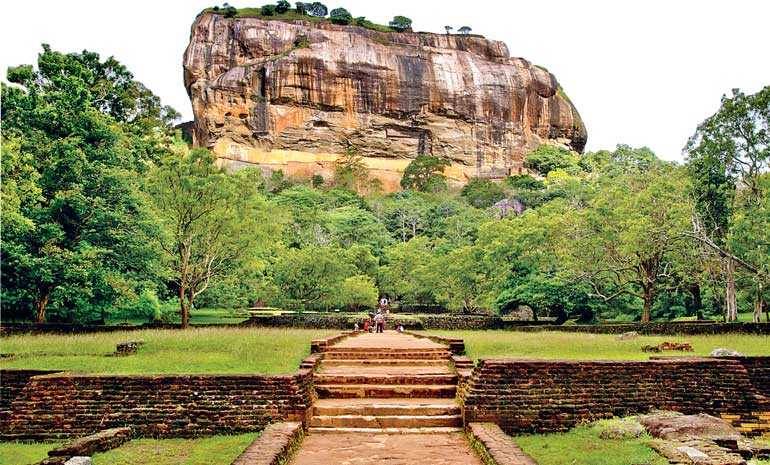 The news that the Sigiriya frescoes and graffiti are being copied using laser technology is indeed a welcome move. The frescoes dating back to the 5th century are accepted as the oldest examples of mediaeval paintings in Sri Lanka. The need to preserve them for posterity has been discussed on and off and finally it has been made possible due to modern technology.

Four institutions are involved in the project – the Central Cultural Fund, the Archaeological Department, the Kelaniya University and the Bamberg University in Germany.

Assuring that the frescoes would not be damaged while being copied digitally, Professor B.D. Nandadeva of the Kelaniya University is quoted as saying at a media conference a few days back that even the areas that are faded and difficult to read in the graffiti can be successfully copied. Another encouraging feature is that the digitalised copies will be able to identify signs of any harm that may occur in the future and take precautionary action.

Sigiriya being a World Heritage Site has been increasingly attracting foreign visitors. It is also heavily promoted by tourist organisations.

The wall where the frescoes and graffiti are seen is comparatively well preserved in its original form. Built with brick masonry, the surface of the wall has a highly-polished work, which has given it the name ‘Mirror Wall’. The paintings are found in a depression high above the gallery.

The only secular paintings of ancient Sri Lanka, the frescoes are comparable with those of Ajanta in India. It is believed that there would have been around 500 figures but today there are only 21.

British archaeologist and author John Still (1880-1941) wrote in 1907 that “the whole face of the hill (Sigiriya) appears to have been a gigantic picture gallery…the largest picture in the world perhaps”.  The area covered estimated at 13,500 square metres made him comment that this was perhaps the largest mural ever attempted by man.

The frescoes had led to lot of debate among scholars and researchers.

H.C.P. Bell, the first Archaeological Commissioner who is credited with starting extensive research on Sigiriya in 1894, thought the frescoes depict ladies of King Kassapa’s court (or the King’s wives) in a religious procession to a shrine nearby.

According to the much-respected Commissioner of Archaeology, Professor Senarat Paranavitana, the figures represent Lighting Princesses and Cloud Damsels (‘vijjulata’ and ‘meghalata’). He was of the view that the entire complex is an expression of divine royalty.

Historian Ananda Coomaraswamy described them as divine beings possibly based on what has been recorded in the Mahavamsa – that Kassapa lived in Sigiriya like the god king Kuvera.

Like Paranavitana there were others who argued that the figures were court ladies who assumed the status of divinities.

Paranavitana says that the damsels are “profusely jewelled females depicted as rising from clouds; they are cut off at the waist”. He adds: “We may, however, conclude that the models for these were furnished to the artists by the court ladies and other terrestrial beauties of the time.” 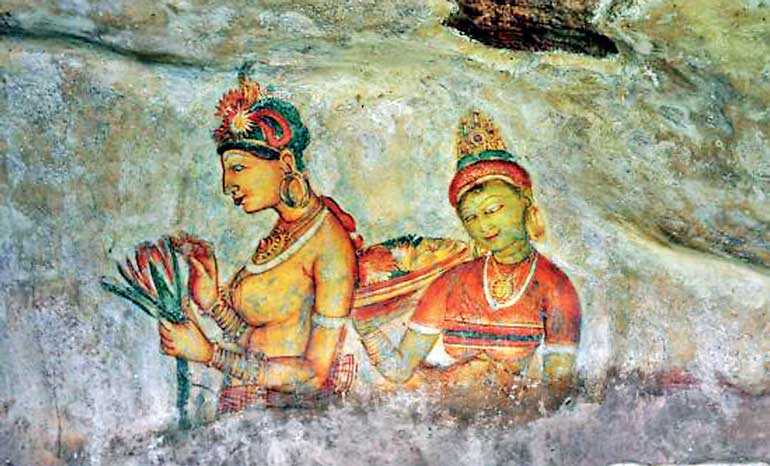 Paranavitana believes that the figures now preserved are but a small fraction of the many hundreds which would have adored the whole face of the rock. “It must have been a magnificent spectacle, and visitors of the eighth and ninth centuries who saw it burst into admiring song; many are the verses (graffiti), embodying their reactions to the sight, they have scrawled on the grass-like plaster of the gallery wall below.”

He deciphered 685 verses on the mirror wall and commented: “These ancient visitors to Sigiri, having seen figures of beautiful women in the paintings, have modified their mental images of them in accordance with the passion or thought predominant in them at the time and composed verses expressive of their state of mind. Many are the examples from our graffiti, which can be quoted to illustrate this statement. I content myself with only one (No. 104): ‘By means of the splendour of the mountain side, I saw the manner in which nymphs stood in heaven. My hand jumped up with the desire of grasping their girdle in dalliance.’”

The Cultural Triangle Guide notes other features that are noticeable in the figures. “The figure are in various stages of maturity. Some are old and some are young with innocent charm. Most of them appear in pairs, one dark complexioned and the other light. The figures do not represent an archetype but have individual impressions. According to the Chronicle King Kassapa fancied himself as the God of Wealth and these figures of women obviously modelled on the ladies in his court were meant to be attendant on him.”

As for the influence of the Sigiriya frescoes on later painters, Seneka Bandaranayake notes that the Kandyan artists who painted the murals at Dambulla were inspired by them. Dr. Nandadave Wijesekera comments: “The general style of Dambulla dissipates the aroma of Sigiriya though it is not the same chaste flavour that emanates the scent.”