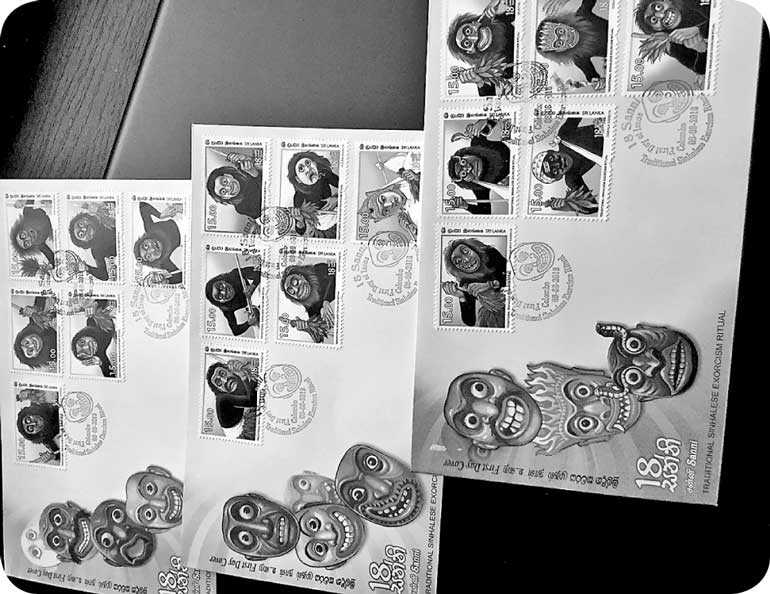 Folk rituals have been practised in different areas of Sri Lanka from ancient times. Over time they have taken different forms and numerous types of ceremonies and rituals continue to be held. These traditions take different forms in different parts of the country. Basically, they differ in the up country, low country and the Sabaragamuwa region.

Among these traditional exorcism rituals the ‘sanni’ dancing ritual is practised mainly in three areas - Bentara, Matara and Raigama. There is a similarity between Raigam school of dancing and the Bentara school. These two follow the ‘gam madu’ ritual in terms of the style of dance, decorated costumes and dialogues.

A recent issue of stamps feature a rather unusual theme – the ‘Daha Ata Sanniya’. As the name suggests, it is ‘sanni’ dance of the Bentara tradition in 18 stages. ‘Sanni’ is a word used for diseases. Dances are performed by actors wearing masks with slight variations.

The different masks featured in the stamps relate to the following diseases:

Professor Lionel Bentarage of the University of Aesthetic Arts gives a detailed description of the ‘sanniyas’ in the Stamp Bulletin No. 915 which had been released with the Special Issue depicting the ‘Daha-ata-sanniya’. Each stamp identifies each demon.

According to him, it appears that the symptoms of diseases caused by ‘sanni’ demons can be compared with those of the local Ayurveda system. Dances are performed using abstract physical movements in a manner that highlights the ill health situations of the relevant ‘sanniya’ accompanied with singing, drum beats, and dialogues portraying the nature of the character imitated.