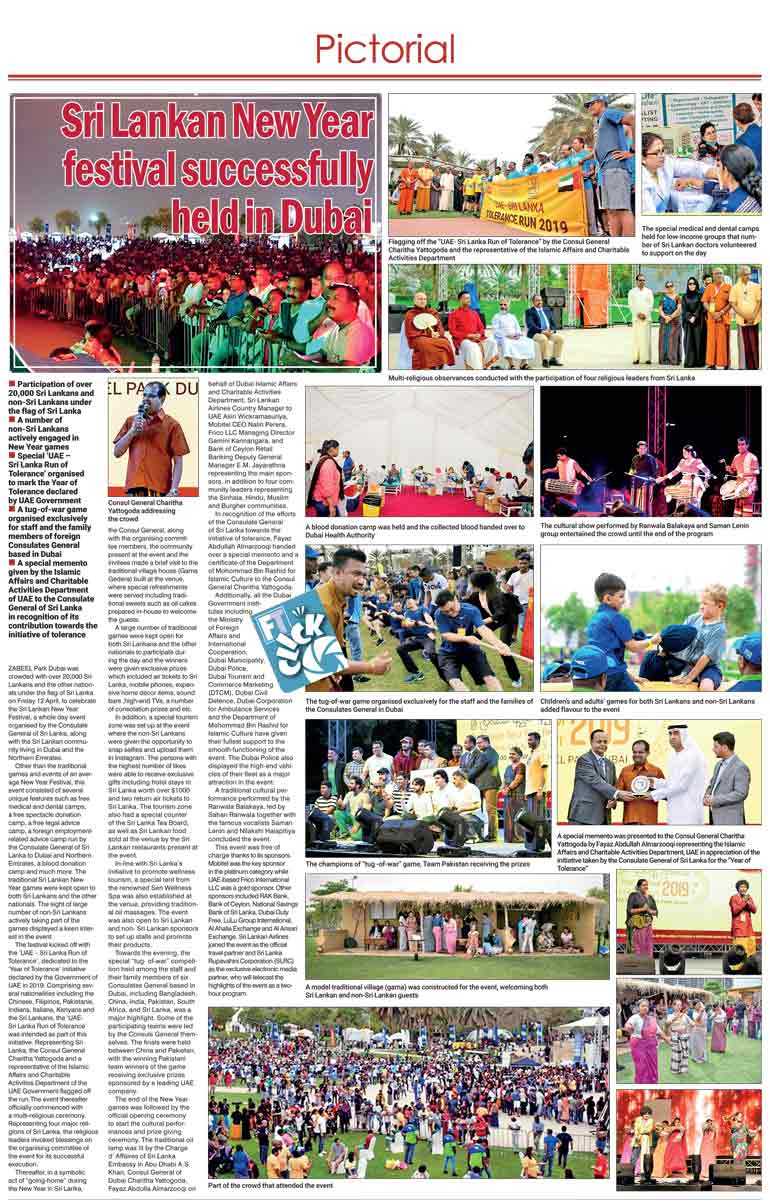 Zabeel Park Dubai was crowded with over 20,000 Sri Lankans and the other nationals under the flag of Sri Lanka on Friday 12 April, to celebrate the Sri Lankan New Year Festival, a whole day event organised by the Consulate General of Sri Lanka, along with the Sri Lankan community living in Dubai and the Northern Emirates.

Other than the traditional games and events of an average New Year Festival, this event consisted of several unique features such as free medical and dental camps, a free spectacle donation camp, a free legal advice camp, a foreign employment-related advice camp run by the Consulate General of Sri Lanka to Dubai and Northern Emirates, a blood donation camp and much more. The traditional Sri Lankan New Year games were kept open to both Sri Lankans and the other nationals. The sight of large number of non-Sri Lankans actively taking part of the games displayed a keen interest in the event.

The festival kicked off with the ‘UAE – Sri Lanka Run of Tolerance’, dedicated to the ‘Year of Tolerance’ initiative declared by the Government of UAE in 2019. Comprising several nationalities including the Chinese, Filipinos, Pakistanis, Indians, Italians, Kenyans and the Sri Lankans, the ‘UAE- Sri Lanka Run of Tolerance’ was intended as part of this initiative. Representing Sri Lanka, the Consul General Charitha Yattogoda and a representative of the Islamic Affairs and Charitable Activities Department of the UAE Government flagged off the run.The event thereafter officially commenced with a multi-religious ceremony. Representing four major religions of Sri Lanka, the religious leaders invoked blessings on the organising committee of the event for its successful execution.

Thereafter, in a symbolic act of “going-home” during the New Year in Sri Lanka, the Consul General, along with the organising committee members, the community present at the event and the invitees made a brief visit to the traditional village house (Gama Gedera) built at the venue, where special refreshments were served including traditional sweets such as oil cakes prepared in-house to welcome the guests.

A large number of traditional games were kept open for both Sri Lankans and the other nationals to participate during the day and the winners were given exclusive prizes which included air tickets to Sri Lanka, mobile phones, expensive home décor items, sound bars ,high-end TVs, a number of consolation prizes and etc.

In addition, a special tourism zone was set up at the event where the non-Sri Lankans were given the opportunity to snap selfies and upload them in Instagram. The persons with the highest number of likes were able to receive exclusive gifts including hotel stays in Sri Lanka worth over $1000 and two return air tickets to Sri Lanka. The tourism zone also had a special counter of the Sri Lanka Tea Board, as well as Sri Lankan food sold at the venue by the Sri Lankan restaurants present at the event.

In-line with Sri Lanka’s initiative to promote wellness tourism, a special tent from the renowned Sen Wellness Spa was also established at the venue, providing traditional oil massages. The event was also open to Sri Lankan and non- Sri Lankan sponsors to set up stalls and promote their products.

Towards the evening, the special “tug- of-war” competition held among the staff and their family members of six Consulates General based in Dubai, including Bangladesh, China, India, Pakistan, South Africa, and Sri Lanka, was a major highlight. Some of the participating teams were led by the Consuls General themselves. The finals were held between China and Pakistan, with the winning Pakistani team winners of the game receiving exclusive prizes sponsored by a leading UAE company.

In recognition of the efforts of the Consulate General of Sri Lanka towards the initiative of tolerance, Fayaz Abdullah Almarzooqi handed over a special memento and a certificate of the Department of Mohommad Bin Rashid for Islamic Culture to the Consul General Charitha Yattogoda.

Additionally, all the Dubai Government institutes including the Ministry of Foreign Affairs and International Cooperation, Dubai Municipality, Dubai Police, Dubai Tourism and Commerce Marketing (DTCM), Dubai Civil Defence, Dubai Corporation for Ambulance Services and the Department of Mohommad Bin Rashid for Islamic Culture have given their fullest support to the smooth functioning of the event. The Dubai Police also displayed the high-end vehicles of their fleet as a major attraction in the event.

A traditional cultural performance performed by the Ranwala Balakaya, led by Sahan Ranwala together with the famous vocalists Saman Lenin and Nilakshi Halapitiya concluded the event.

This event was free of charge thanks to its sponsors. Mobitel was the key sponsor in the platinum category while UAE-based Frico International LLC was a gold sponsor. Other sponsors included RAK Bank, Bank of Ceylon, National Savings Bank of Sri Lanka, Dubai Duty Free, LuLu Group International, Al Ahalia Exchange and Al Ansari Exchange. Sri Lankan Airlines joined the event as the official travel partner and Sri Lanka Rupavahini Corporation (SLRC) as the exclusive electronic media partner, who will telecast the highlights of the event as a two-hour program.