On 6 May, the Royal Thai Embassy in Colombo organised a ceremony to offer blessings and good wishes to King Rama X on the auspicious occasion of his coronation. The ceremony was held at the residence of Ambassador of the Kingdom of Thailand to Sri Lanka Chulamanee Chartsuwan, who presided over the ceremony. Officials of the Royal Thai Embassy and the Thai community in Colombo attended the ceremony in large number. The ceremony started at 3 p.m., coinciding with the time that the King of Thailand granted a public audience on the balcony of Suddhaisavarya Prasad Hall in the Grand Palace in Bangkok to receive good wishes of the Thai people. The subsequent function in Bangkok was an audience by members of the diplomatic corps, who offered their felicitations on this special occasion at Chakri Maha Prasad Throne Hall. The coronation ceremony, a three-day event which took place in Bangkok from 4-6 May, is an ancient royal practice to complete the procedure of the enthronement of the King of Thailand. It is an important event in Thailand where the monarchy is the core institution – Pix by Upul Abayasekara 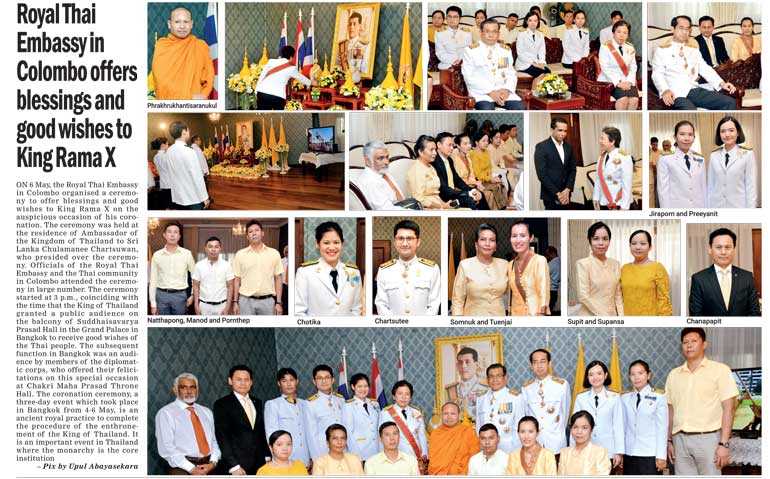