The Royal Thai Embassy in Colombo organised an almsgiving ceremony on the auspicious occasion of the coronation of King Rama X at the residence of Ambassador of the Kingdom of Thailand to Sri Lanka Chulamanee Chartsuwan on 4 May. The event was attended by the Thai community in Colombo as well as a number of Sri Lankans, including the President and Board members of the Sri Lanka-Thailand Society, the Sri Lanka-Thailand Business Council, the CEO of INSEE Cement, and Thai Airways International personnel. The ceremony was presided over by Ven. Dr. Waskaduwe Mahindawansa Maha Nayaka Thero of the Dipaduttamarama Temple. Two Thai monks from Jayasekhararamaya also participated in the ceremony, which included Buddhist chantings and almsgiving to 10 Buddhist monks. An exhibition about the biography and royal activities of His Majesty Maha Vajiralongkorn Bodindradebayavarangkun (King Rama X) was displayed alongside the religious event. This merit making ceremony was part of religious ceremonies organised by all Thai diplomatic missions around the world on the first day of the coronation ceremony.– Pix by Upul Abayasekara 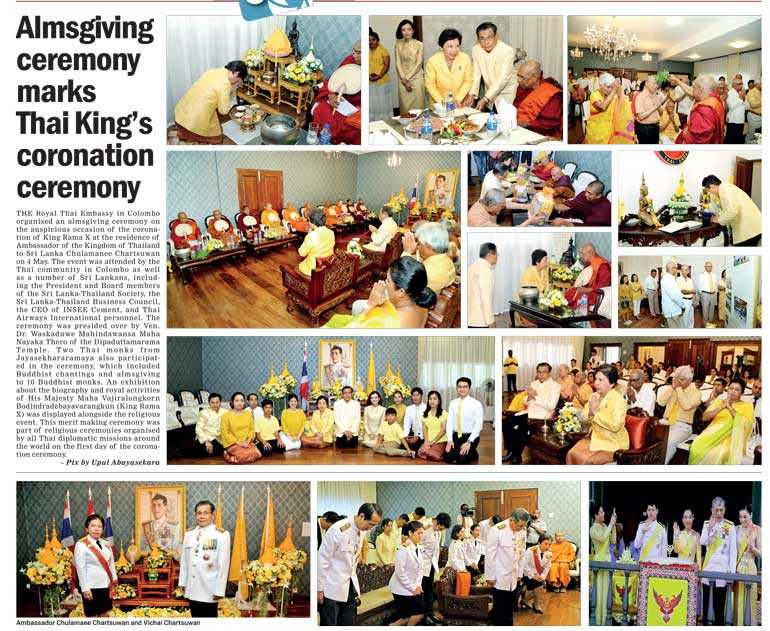