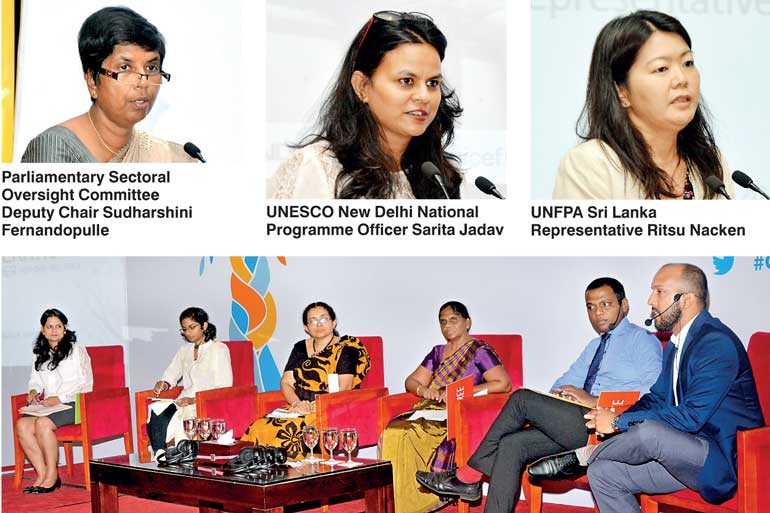 The United Nations Population Fund (UNFPA) last week highlighted the need for accurate sexual education as a priority for youth in Sri Lanka at the fifth Generation-to-Generation dialogue held at the BMICH.

The event was held to mark World Population Day 2018 and was organised in collaboration with the Parliamentary Sectoral Oversight Committee on Women and Gender and the Ministry of Education.

Parliamentary Sectoral Oversight Committee Deputy Chair Sudharshini Fernandopulle in her keynote said: “Preparing young people for the transition to adulthood at a time for relationships and sexuality is a central challenge.”

Fernandopulle noted that currently almost every young Sri Lankan received little to no accurate information about sexuality and protecting their health, leaving them vulnerable to abuse, unintended pregnancies and sexually transmitted infections including HIV and AIDS. Reproductive health is among the most fundamental aspects of life, she stressed.

“The youth receive little attention in public policy discussions because of cultural and political sensitivity. In Sri Lanka, traditional, religious and family values designed to protect young people have restricted sexual and reproductive health education for young people, especially within the education system,” she emphasised.

While Sri Lanka has a youth population of over 4.4 million between the ages of 15 and 29 years, the National Youth Health Survey conducted in 2013 identified that close to 50% of young people have limited knowledge about sexual and reproductive health.

Likewise, according to statistics from the Family Health Bureau, while teenage pregnancy in Sri Lanka is relatively low at 5.2%, subnational disparities exist with a rate of 89% in some localities. Further, the Stigma Assessment of People Living with HIV conducted in 2017 indicates that HIV prevalence in the country is 0.01% yet new infections are seemingly increasing, especially among young people.

She highlighted the fact that there was a misunderstanding that Comprehensive Sexuality Education makes young people more promiscuous but has been proven to help them develop self-esteem and life skills that encourage critical thinking, clear communication, responsible decision-making and respectful behaviour.

Sharing her insights on Comprehensive Sexuality Education, UNESCO New Delhi National Programme Officer Sarita Jadav identified it as a curriculum-based process of teaching and learning about the cognitive, emotional, physical and social aspects of sexuality.

“Pregnancy and childbirth complications are the second cause of death among 15-19-year-olds with approximately 70,000 adolescents being affected annually and close to 246 million children are subjected to some form of gender-based violence in or on the way to school. Around 120 million girls have experienced forced sexual activity,” she noted.

Jadav urged the country to collaborate with corporates and ministries of health and education to provide all students with the accurate information needed on sexual health as many of the key sexual and reproductive health issues such as sexual violence, abortion, puberty and access to modern contraception among others could be hence addressed.

“One of the challenging areas to talk about Comprehensive Sexuality Education is the North which is where I was born and raised for 20 years and a misconception is very prominent among most schools which I myself have experienced growing up. One of the often skipped subjects was the lesson on reproductive health but it shouldn’t be so. These topics should be discussed in public to educate the youth,” said Thushan.

He emphasised the fact that the lack of Comprehensive Sexuality Education always led to the deprival of people and creates that fear of being labelled when something goes wrong. Cultural dynamics here in Sri Lanka are very different and stigmatic but must not be so, Thushan stressed.

Lokubalasuriya in her session said: “There are two reasons that children get conceived, one is intended and the other is unintended. Education is very important to dissolve this matter and so is family planning. Likewise, we have to provide the right services and facilities for the children in order for them to gain accurate  Comprehensive Sexuality Education.”

She also emphasised the fact that almost every district had places where the youth could go to pursue sexual activity at a very low cost and the country must address this issue. Lokubalasuriya further pointed out that education at a very early stage was crucial to minimise these conundrums in Si Lanka.

Peiris sharing her insights stated: “While health is compulsory for eight graders, 42% follow health education in secondary school. We have set age appropriate curriculums in schools.”

She stressed the fact that we need to think about all the information that we can pass down to students in schools which will in turn develop their life skills and behaviour.

“Schools really don’t address reproductive health and I had zero knowledge growing up as a child. There is a massive gap here in Sri Lanka and in most conservative societies these subjects are not talked about at all. If it is instilled in you during school, it is much easier to face problems when you are older,” noted Nazim.

Nazim also highlighted that family planning was very important alongside education. She went on to say that if children were not taught in school they would learn it the wrong way from the wrong places.

During the panel discussion Jadav once again stated that Comprehensive Sexuality Education was very important for youth in Sri Lanka as it benefits them and society as a whole by instilling equality and responsible thinking among everyone.